Miguel Montero miffed by role with Cubs during postseason run 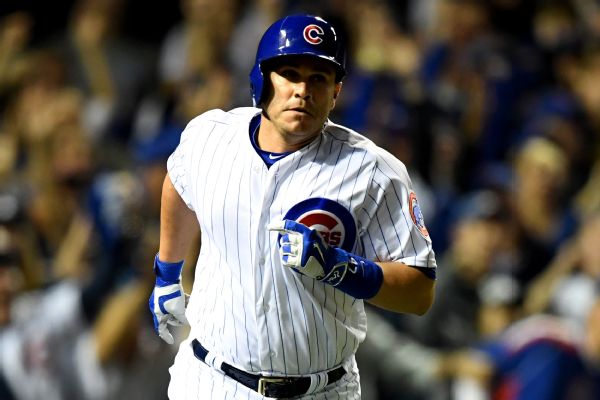 CHICAGO -- On the day the Chicago Cubs celebrated their first championship in 108 years, one player wasn't exactly in the partying mood.

While thrilled his team won the World Series, catcher Miguel Montero wasn't happy with his role on the team in the postseason or the lack of communication about it.

"It was different for me," Montero said to the Waddle and Silvy Show on ESPN 1000 on Friday. "It was a different emotion because I didn't get a chance to play. I was a little disappointed, to be honest, because I felt like I did a good job in the regular season but was left out a little bit. It made me feel a little like not important or maybe not as good to be in this lineup."

Montero had just 12 at-bats the entire postseason, including four in the World Series, but he had some keys hits throughout the month of October. Manager Joe Maddon gave rookie Willson Contreras the bulk of the playing time behind the plate due to his stronger throwing arm, leaving Montero to catch just the final two innings of Game 7 against the Cleveland Indians.

Montero also drove in what turned out to be the final run in the top of the 10th inning in the deciding game, an 8-7 victory.

"I think the toughest part for me is they never communicated with me," Montero said. "I'm a veteran guy. They talk about veteran leadership. I have 11 years in the game and two All-Star [appearances]. I expected to be treated a little better. I was expected to get communication. Just let me know. Put me in the loop. That was the toughest part for me because I never understood what my role was going to be."

Montero struggled early in the season but found his swing in the second half producing an .807 OPS in September. He also had some clutch hits in the postseason including a grand slam in the Game 1 win over the Los Angeles Dodgers in the National League Championship Series.

"Catching the last two [innings] of the World Series made it sweet," Montero said. "Otherwise, it would have been nice because I'm part of it but maybe I didn't help as much as I wanted to help. To be more involved ... I would have felt bad to go home with the trophy and not even catch one inning in the World Series. That would be the tough part."

Montero likened it to playing in a golf "scramble" in which a player's ball is never used but the foursome still wins. He also echoed criticism of Maddon's use of closer Aroldis Chapman, reminding everyone that the Cubs got to Clayton Kershaw and Corey Kluber when they pitched on short rest.

Chapman was hit hard in Game 7 after Maddon used him in Games 5 and 6 despite the latter contest being a blowout win.

"He [Chapman] could be tired?" Montero asked rhetorically. "Of course he was tired. The guy threw 40 pitches two days ago. You have guys in the bullpen doing the job all year -- they should be able to help, too."

Montero is signed for one more year for $14 million and is considered a good teammate. In the same interview, he praised right fielder Jason Heyward for his leadership skills.

Montero fell behind veteran David Ross, who is retiring, and Contreras for playing time but always tried to make the best of it with a self-deprecating sense of humor.

"I'm mentally drained," he said. "Physically, I feel pretty good because I didn't play much."