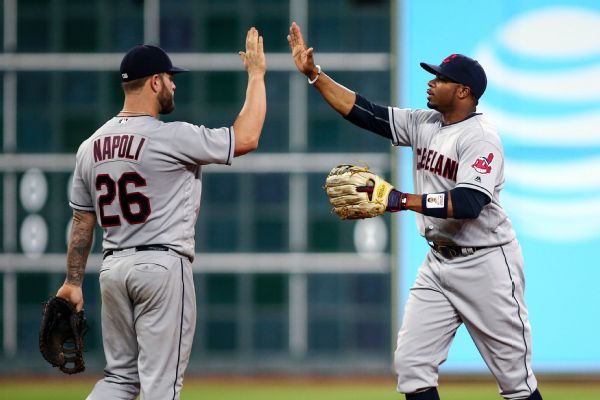 Indians president Chris Antonetti said last week that the club had expressed to both Napoli and Davis that they would like to re-sign the potential free agents.

All teams have until 5 p.m. ET on Monday to determine whether to offer their free agents a one-year, $17.2 million deal. If the player declines the deal, the team which made the offer is eligible for a compensatory draft pick the following year if he signs elsewhere.

The Indians also announced Monday that veteran outfielder Coco Crisp, whose $13 million option was declined Friday, was not extended the qualifying offer.

In his first season with Cleveland, Napoli reached career highs in homers (34), plate appearances (645) and RBIs (101). The 35-year-old struggled in the postseason, but Antonetti said Friday that the Indians would take into account "the balance of the season."

"Mike did a phenomenal job for us," he said. "He made a huge impact for us on the field and in the clubhouse, and I think that's the lens through which we'll view it."

Davis, too, helped the Indians to their first AL Central title since 2007. The 35-year-old led the league in stolen bases (43) and helped them offset the loss of All-Star outfielder Michael Brantley.

For a little while, Davis had the biggest homer in Cleveland history. His dramatic two-run shot in the eighth inning of Game 7 of the World Series off Cubs closer Aroldis Chapman tied the score 6-6 before Chicago scored two in the 10th.