NBA Finals' top 30 Warriors and Raptors: Where are KD and Boogie? 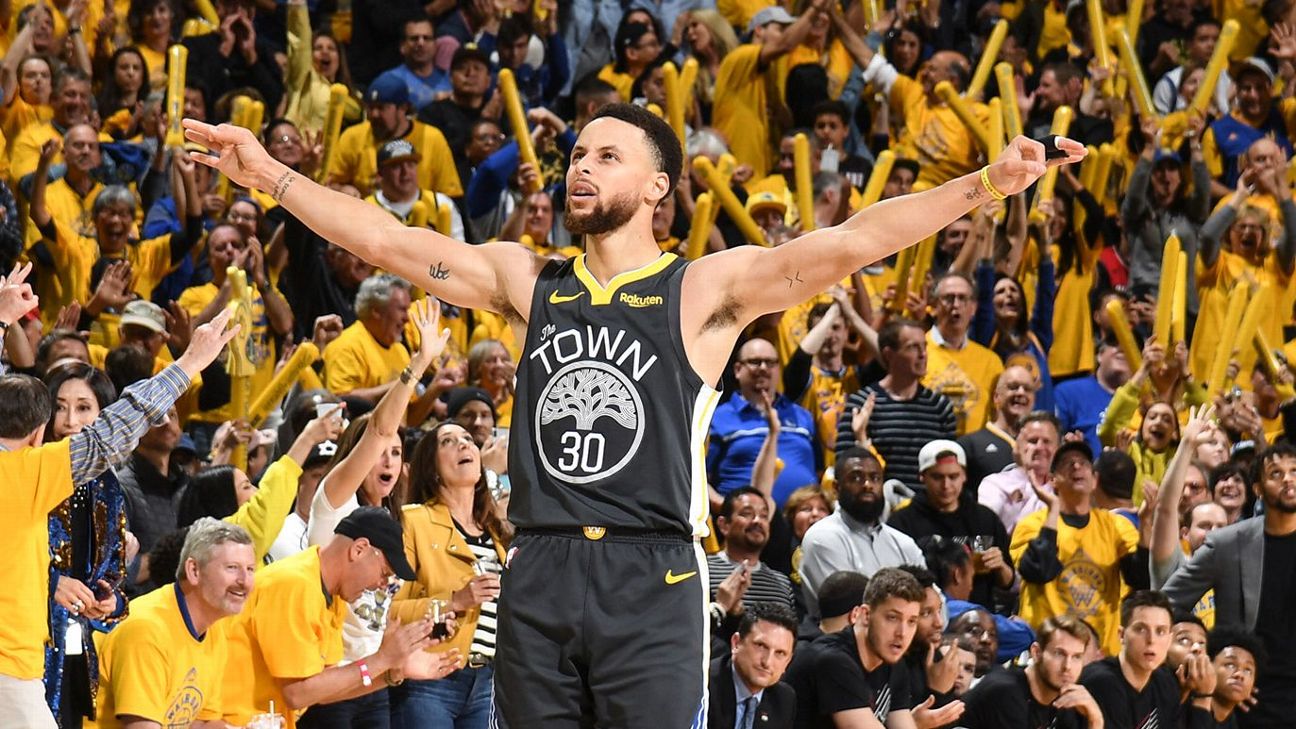 Kawhi Leonard or Stephen Curry? Where should sidelined stars Kevin Durant and DeMarcus Cousins check in? Who's the second-best Raptor?

We're breaking down the top 30 players battling it out for the Larry O'Brien trophy in the 2019 NBA Finals, which pits the Golden State Warriors against the Toronto Raptors (Game 1, ABC, 9 ET).

Leonard, indisputably the most dominant two-way force so far in these playoffs, has joined Michael Jordan, LeBron James, Elgin Baylor, Hakeem Olajuwon and Bernard King as the only players in NBA history to record seven 35-point performances in a single postseason before the Finals. The 2014 Finals MVP has a chance to crack an even more exclusive club, as James and Kareem Abdul-Jabbar are the only players to win Finals MVP with two franchises.

Curry has averaged 35.8 points with a true shooting percentage of 66.3 as the Warriors reeled off five wins in a row without Kevin Durant. He has put up at least 35 points in four straight games, tying Rick Barry for the longest such postseason streak in franchise history. If that run continues, bet on the Warriors winning Game 1 -- Golden State is 17-1 when Curry scores at least 35 in playoff games. Although he's the favorite to win his first Finals MVP award, he's the runner-up on this list.

The biggest question entering this series: When will Durant, already ruled out for Game 1, be ready to return from the calf strain that has sidelined him since the third quarter of Game 5 in the conference semifinals? Durant, the two-time reigning Finals MVP, was rolling before his injury, averaging 34.2 points on 50/40/90 efficiency in these playoffs. His missed games drop him here to No. 3, but if he returns in the Finals to something close to his pre-injury self, this ranking is far too low.

After slimming down significantly, Green has been stuffing box scores, racking up four triple-doubles during the Warriors' run through the Western Conference bracket and missing another by a bucket. The only players with more triple-doubles in a postseason: Wilt Chamberlain, Magic Johnson and Oscar Robertson.In Green's career, Golden State is 29-1 when he gets a triple-double.

His defensive work might be as valuable to the Warriors as his shooting, and Thompson is one of the best shooters of all time, especially in the playoffs. He ranks fourth in NBA playoff history, with 350 made 3-pointers, shooting the best percentage (.407) of anyone who has hit at least half that many.

Lowry's reputation as a poor playoff performer, based in large part on his tendency to struggle in series openers, isn't entirely unfair. His career playoff stats (15.2 points, 4.4 rebounds, 5.6 assists per game) are very similar to his regular-season numbers. Leonard is the only Raptor with a better plus-minus than Lowry (plus-128) this postseason.

Iguodala, 35, was having a sensational playoff run before soreness in his lower leg sidelined him for Game 4 of the West finals. He has been especially springy, throwing down 29 dunks in 15 games, and has been a dominant on-ball defender, often against the opponent's go-to guy.

The formerMemphis Grizzliesbig man has served as the anchor of the Raptors' stingy defense, as opponents have shot only 41.5 percent from the floor on shots challenged by Gasol during these playoffs. Toronto needs his shotmaking, too. The Raptors are 1-3 in the playoffs when Gasol doesn't make a 3-pointer and 7-2 when he makes at least two.

Will VanVleet's hot hand survive the layoff before the Finals? He was a sizzling 14-of-17 from 3-point range in the final three games of the Eastern Conference finals. That was a stunning turnaround from his 5-of-35 slump in the previous 14 games.

Ibaka has seen his role reduced since the Raptors traded for Gasol. He's averaging only 21.3 minutes per game in the playoffs and has struggled to find an offensive rhythm, shooting only 44.8 percent from the floor (7-of-32 from 3-point range).

Steve Kerr called Looney "a foundational piece" for the Warriors after the West finals. The 23-year-old big man has Golden State's best net rating (plus-14.0 points per 100 possessions) in these playoffs.

Green didn't score in the last two games of the East finals and went 1-of-15 from 3-point range in the last four games. His track record suggests that the Raptors shouldn't be worried. He's a career 39.9 percent playoff 3-point shooter, going 36-of-69 from long distance in his previous two Finals appearances.

After falling to the fringe of the rotation in the second round, Powell played a key role in the East finals, when he averaged 12.3 points in 22.8 minutes per game.

Cousins might be the biggest wild card in the series considering he hasn't played since tearing his left quad on April 15. The former All-Star is cleared medically and will be activefor Game 1, but Warriors head coach Steve Kerr has concerns about Cousins' conditioning and rhythm after a long layoff.

Livingston, who had a terrific career despite a devastating knee injury when he was young, is expected to consider retirement this summer. He's still a valuable role player, a steady presence off the Warriors' bench.

After spending last season on a two-way deal with Toronto, McKinnie made the Warriors as the 15th man out of training camp. His primary contributions come on the defensive end.

The springy, second-year forward/center barely played in the first two rounds but averaged 11 minutes per game in the West finals. He's an athletic alternative for the Warriors' second unit.

Bogut was plus-24 as the Warriors' starting center in their win in Game 3 of the first round. Since then, Golden State has been outscored by 37 points with the Australian big man on the floor.

Cook played 210 seconds in last season's Finals but has been in the rotation since Durant went down, averaging 4.4 points in 12.5 minutes over the past four games.

The 6-foot-10 Jerebko gives the Warriors an option for a stretch-4 in a big lineup, but he's only 8-of-28 from the floor and 2-of-11 on 3s in sporadic minutes this postseason.

An emergency appendectomy has sidelined Anunoby, a key reserve during the regular season, for the entire playoffs. Anunoby is officially listed as questionable for Game 1, as the Raptors hope he can contribute at some point during the Finals.

In theory, Meeks gives the Raptors a shooting threat at the end of the bench. He's 2-of-13 from 3-point range this postseason, almost all in mop-up duty.

Lin has played 26 total minutes this postseason. He shot only 37.4 percent from the floor after being traded to Toronto midseason.

In his only meaningful playing time this postseason, Jones picked up three fouls in the first 3 minutes, 17 seconds of Game 3 of the Western Conference finals. 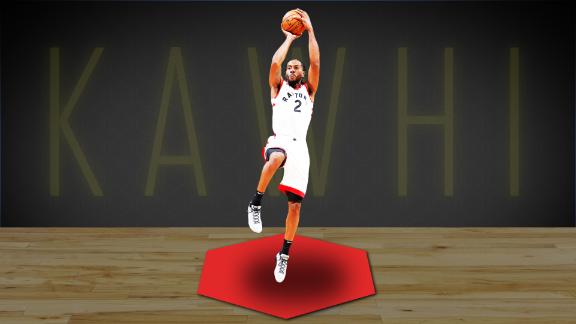 Kawhi Leonard's incredible playoff run hinges on pull-ups
He can hit the 3 or get to the hoop, but the key to Kawhi Leonard's success in the NBA Finals will be pull-up jumpers, especially on the right side. 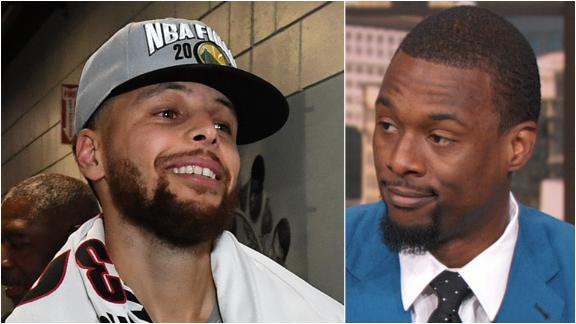 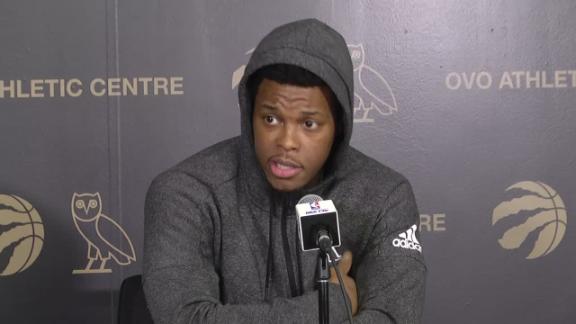 Lowry not concerned with skeptics picking against Raptors
Kyle Lowry says it doesn't matter who's picking against Toronto in the NBA Finals, the team just needs to worry about playing their game. 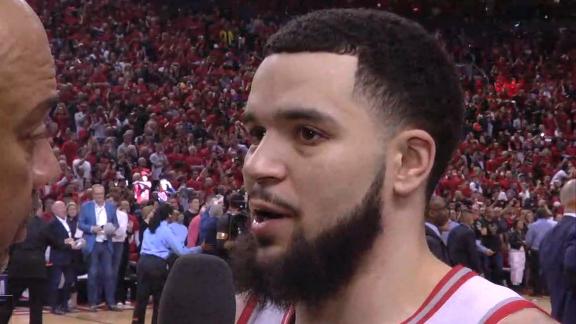