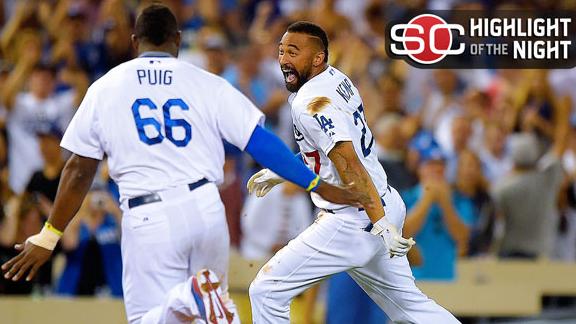 Kemp has been the subject of trade rumors since baseball's winter meetings, speculation that heated up after his agent remarked that a change of scenery might be in his client's best interests after Kemp was moved out of center field.

The trade rumbling died down recently, with Kemp batting .397 in 18 games through Wednesday night. Kemp hit a home run off Alex Wood in the second inning Wednesday, his third home run in the past two games, and singled in the winning run in the bottom of the 10th inning as the Dodgers beat the Braves 3-2.

Colletti's focus is entirely on pitching, he said, with the trade deadline rapidly approaching at 4 p.m. ET Thursday. Colletti further narrowed his focus to starting pitching, saying that right now he doesn't "see anybody out there" on the relief market, but adding, "When the sun comes up, the world changes sometimes, so we'll see."

"At this point in time, we're not in the market to trade any of the three, period," Colletti said. "There's been no player that we've discussed that warrants two of the three, three of the three. Otherwise, we'd be having a different meeting right now."

Colletti reiterated his willingness to go the rest of the season with his current 25-man roster. The Dodgers are riding their first five-game winning streak of the season and have the best record in the National League.

"It's not like our needs are excessive," Colletti said. "We're trying to take it from 'good' to 'great,' perhaps. It's not like we've got many holes to fill and an abundance of different options or matches."