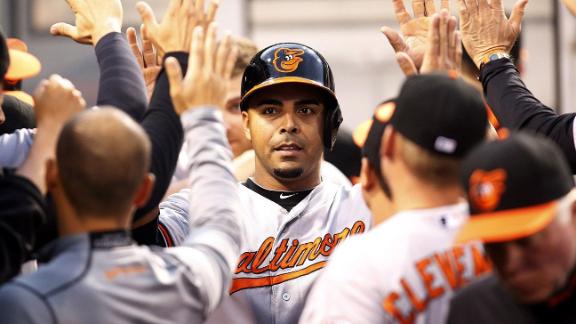 Veteran outfielder Nelson Cruz has agreed to a multiyear deal with the Seattle Mariners, pending a physical, a league source confirmed to ESPN.com's Jerry Crasnick.

With the Baltimore Orioles last season, the 34-year-old Cruz led the majors with 40 home runs and finished third in the American League with 108 RBIs.

He signed a one-year, $8 million free-agent deal with the Orioleson Feb. 24. He was suspended for 50 games on Aug. 5, 2013, for his involvement with Biogenesis.

The Orioles made a one-year qualifying offer of $15.3 million to Cruz for 2015, which he rejected, ensuring them draft-pick compensation if he signs with another team.

Cruz brings significant thump to a Seattle offense that finished tied for 11th in the American League with 634 runs scored and ranked last among the 15 AL clubs with a .676 OPS in 2014. The Mariners had reportedly been involved in trade discussions for Matt Kemp, Justin Upton and Yoenis Cespedes, among others, in their efforts to acquire a right-handed power bat before settling on Cruz.

Mariners utility infielder Willie Bloomquist expressed his excitement for the move on Twitter.

The Mariners pursued Cruz in free agency last winter before he signed with Baltimore, according to sources. Robinson Cano, who signed a 10-year, $240 million contract with Seattle a year ago, openly lobbied for the team to sign Cruz during his introductory spring training news conference in Arizona in February.