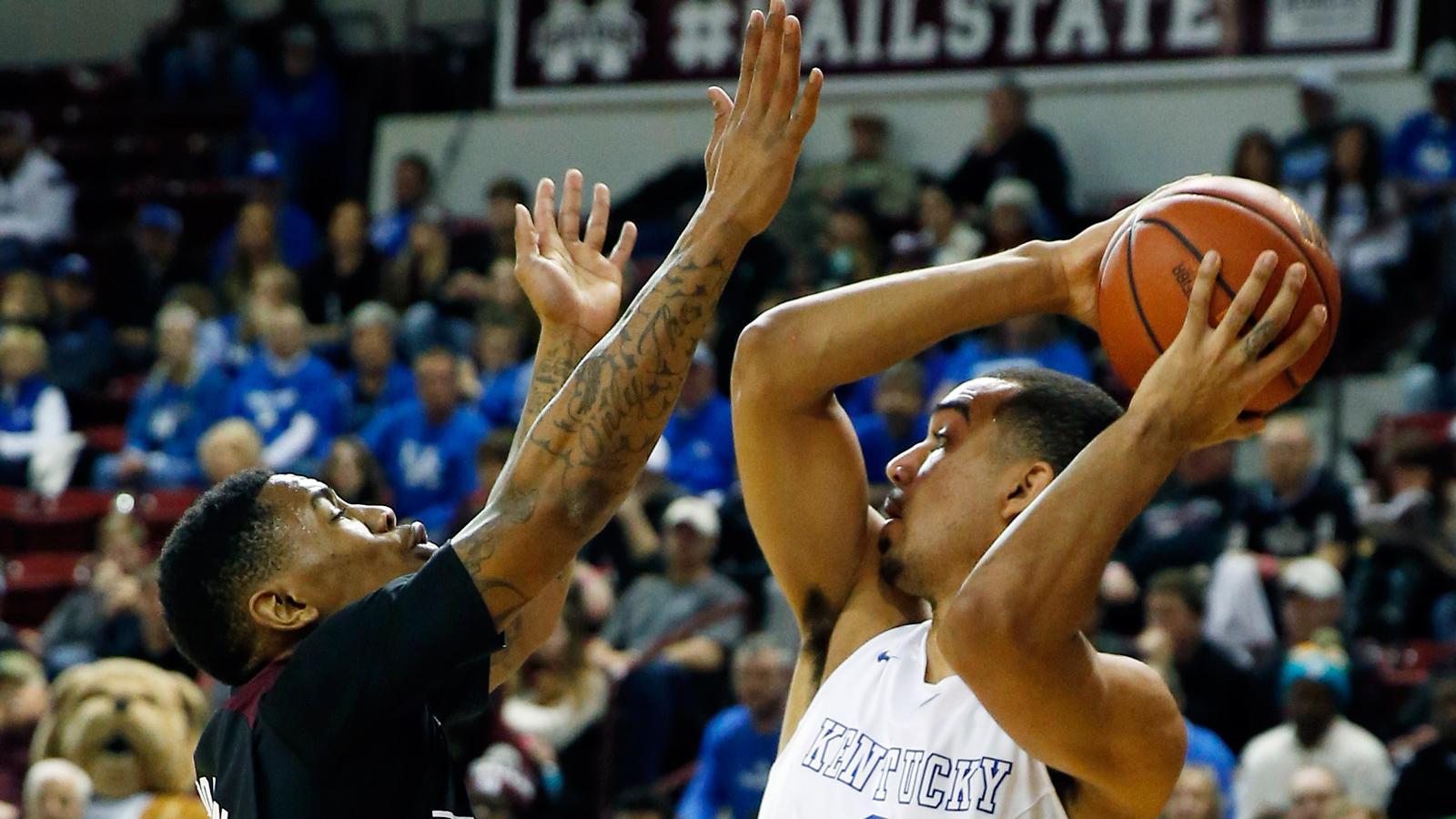 STARKVILLE, Miss. -- On a roster full of superstars, top-ranked Kentucky's Trey Lyles often is an afterthought.

At least for one night, the 6-foot-10 freshman gave a glimpse of how important he could be for the Wildcats in their quest for an undefeated season and a national championship. Lyles scored a career-high 18 points in Kentucky's 74-56 victory over Mississippi State on Wednesday night, sending the Wildcats to a 28-0 record.

"He should have had 25 points today, but I thought he played well," Calipari said. "I still think at the end of the day he'll be the X factor for us."

Aaron Harrison added 16 for Kentucky (15-0 Southeastern Conference), the only remaining undefeated team in the country.

Kentucky's 28-game winning streak is the second-longest in school history, trailing only a 32-game run that stretched from 1953 to 1955. It's the longest in a single season for the program, topping a 27-game streak during the 1995-96 season.

The Wildcats had to work a little for this one, leading just 41-37 with 15:10 remaining. But they responded with an avalanche of points down the stretch -- punctuated by a thunderous dunk by Karl-Anthony Towns -- to turn the contest into another convincing blowout.

Calipari said the game was more evidence of how good his team can be with the proper mindset.

"I just told the guys, 'Look, I can fight you for the next 40 days if that's what you want. And I will fight you,'" Calipari said. "Or you can just play like you're capable of playing. They know what we want them to do."

Lyles, who hit seven of 12 shots, missed three games earlier in the month because of an illness but has bounced back.

"I was just being aggressive and attacking the basket," Lyles said.

Kentucky has appeared to be unstoppable of late, especially during a 110-75 rout of Auburn on Saturday.

And the Wildcats had some more spectacular moments Wednesday, including two alley-oop dunks finished by Lyles in the opening four minutes.

But Kentucky looked slightly mortal for most of the first half, letting a 14-point lead evaporate to 33-27. Tyler Ulis hit a 3-pointer just before the halftime buzzer to push the Wildcats' advantage to 36-27.

They had a few more careless defensive moments early in the second half, which helped Mississippi State briefly make things interesting. Sword's pass to a wide-open Roquez Johnson led to an easy layup, pulling the Bulldogs within 41-37 with 15 minutes remaining.

Kentucky responded with the next six points by pounding the ball into the paint and using its significant size advantage to pull away for the win.

"Whether they end up winning a national championship remains to be seen, but as far as a collective group of talent, that's one of the better basketball teams I've ever seen," Ray said.

Mississippi State: The Bulldogs haven't beaten the No. 1 team in the country since 1996, when they topped Kentucky 84-73. That win ended Kentucky's 27-game winning streak, which until Wednesday was the longest in a single season. ... A rare snowstorm in Mississippi caused Humphrey Coliseum to be only about half full. Many were Mississippi State students who could walk to the on-campus arena.

Kentucky: The 28-game streak is also a personal best for coach John Calipari. He won 27 in a row while coaching Memphis during the 2008-09 season. ... The Wildcats have won 50 of their past 52 games as the nation's top-ranked team.

Kentucky: Hosts No. 18 Arkansas on Saturday. 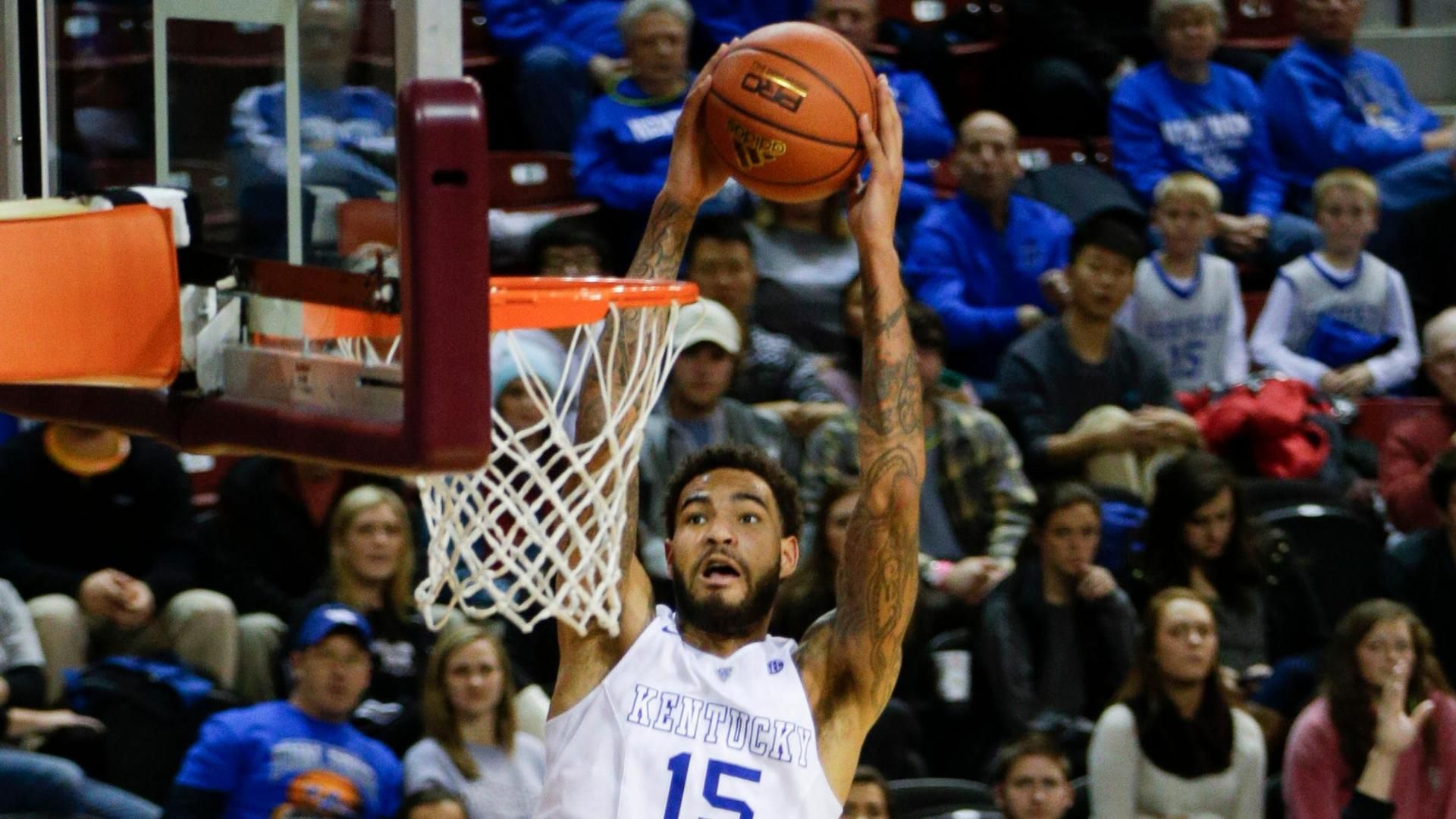