No. 1 Serena Williams rolls in return 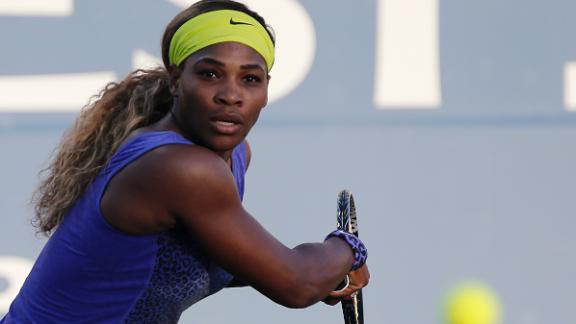 STANFORD, Calif. -- Serena Williams looked healthy and played sharp in her first tournament since defaulting during a doubles match with sister Venus at Wimbledon.

The top-ranked player stopped worrying and started having fun again, beating Karolina Pliskova 7-5, 6-2 in a second-round match at the Bank of the West Classic on Wednesday night.

At Wimbledon, Williams tried to play through a viral infection that caused her to lose her equilibrium during the doubles match. On Wednesday night, encouraged by a large crowd, Williams fought through a tough first set before she found her legs and took control of the match with a big second set.

"I thought I played well," Williams said. "I'm on the right path, I'm excited and I'm looking forward to my next match."

In the quarterfinals, Williams will meet the winner of Thursday's match between fifth-seeded Ana Ivanovic and qualifier Carol Zhao, a Stanford sophomore playing in her first WTA event.

Williams casually deflected questions about her health, preferring to bring the conversation into the present.

"I'm still taking it a match at a time," she said. "It worked out. I was feeling fine. I made some silly errors early because I was not on my toes enough."

Pliskova managed to hold her serve most of the first set but did not have an answer once Williams found her own serve.

"I knew she's a player that is tough to break so it was important to me to be super focused on my serve," Williams said. "She served well, and I tried to hang in there and get some break points."

She finally managed to reach break point in the 12th game and took control from there. She was successful on all three break points she had.

Williams took some time off after Wimbledon and vacationed in Croatia before returning to the U.S. for the hard-court season. She said she has been working hard in preparation for a run at the U.S. Open.

Lepchenko beat the fifth-ranked Radwanska for the first time in six meetings, edging a top-10 player for only the third time in 24 matches. Radwanska, the runner-up last year, became the highest-seeded player to fall in the tournament.

"The match was good," Radwanska said. "I wasn't serving enough."

"It was so weird," Petkovic said. "She's 16 and obviously very talented. If I played solid, I knew I had a good shot."