No drivers penalized for Texas fracas 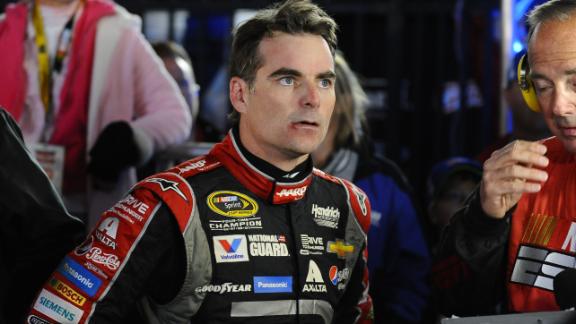 CHARLOTTE, N.C. -- Brad Keselowski and Jeff Gordon avoided any penalty from NASCAR on Tuesday for their post-race fight at Texas. Two crew chiefs and four crew members from Hendrick Motorsports were punished for their roles in the brawl.

Gordon crew chief Alan Gustafson and Kasey Kahne crew chief Kenny Francis were each fined $50,000 and placed on probation for six races because "the crew chief assumes responsibility for the actions of his team members."

NASCAR senior vice president of competition Robin Pemberton said the post-race actions were "unacceptable" following a review of content of the incident. NASCAR "identified several crew members who crossed the line with their actions, specifically punching others."

"A NASCAR championship is at stake, but we can't allow behavior that crosses the line to go unchecked, particularly when it puts others in harm's way," Pemberton said.

Suspended for six races and fined $25,000 were: Jeremy Fuller, the Kahne crew member who came from behind the scrum and threw several haymakers toward Keselowski, as well as Gordon crew members Dwayne Doucette and Jason Ingle.

Hendrick Motorsports said it would not appeal, and the punished team members would not face further sanctions from the organization.

Hendrick team owner Rick Hendricksaid in a statement the new Chase for the Sprint Cup championship format has brought "an unprecedented level of intensity every single week."

"Emotions run high when you're racing for a championship, and that's exciting for our fans and everyone involved with the sport. But there's a line the competitors need to be cognizant of, and we understand that," he said.

He also defended Gordon, the four-time champion who confronted Keselowski after contact between the two on the track. Gordon had been racing for a win that would have moved him into the Nov. 16 championship finale when a caution bunched the field for a restart in overtime.

Keselowski tried to wedge his car through a gap between Gordon and Jimmie Johnson, but made contact with Gordon that caused Gordon to spin when his tire went flat. He wound up 29th and went from first to fourth in the standings.

Keselowski, the 2012 champion who has a series-best six wins this season, is seventh in the standings heading into Sunday's race at Phoenix. Only the top four drivers will compete for the title in the season finale.

"Jeff was rightfully fired up Sunday night, and it just reiterated to me how passionate he is and how much he wants to win," Hendrick said. "The No. 24 team is a group that works together and is loyal to one another. They have our full support as we go into these final two races."

The fight began when Gordon tried to approach Keselowski on pit road following the race, but was stymied by Team Penske crew members standing in front of Keselowski. Then Kevin Harvick came from behind and shoved Keselowski into the scrum. Harvick was not punished by NASCAR.