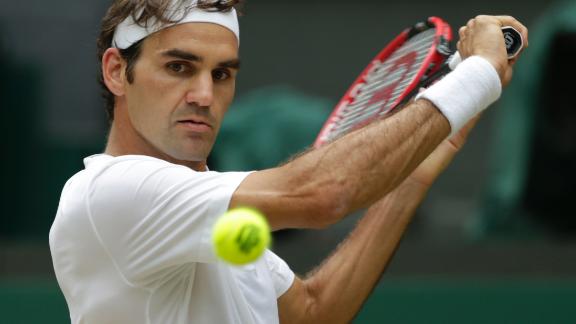 LONDON -- Novak Djokovic and Roger Federer are used to facing each other in the Wimbledon final. But after they met in both the 2014 and 2015 finals, their streak ends this year.

Federer, the seven-time champion seeded No. 3, was placed in Djokovic's top half of the Wimbledon draw on Friday. That means top-ranked Djokovic could face Federer in the semifinals as he bids for a fifth consecutive major title and the third leg of a calendar year Grand Slam.

The second-seeded Andy Murray got a more favorable draw, with No. 4 Stan Wawrinka placed in the bottom half as his potential semifinal opponent.

In the women's draw, defending champion and six-time winner Serena Williams could have a quarterfinal matchup against Roberta Vinci, the Italian who stunned her in the semifinals of the U.S. Open last year and ended her bid for a calendar year sweep of all four major titles.

Djokovic has beaten Murray in the last two Grand Slam finals -- the Australian Open and French Open -- and goes into the grass-court tournament starting on Monday as a strong favorite for a 13th major championship. Another title would put him only four behind Federer's 17.

Djokovic, a three-time Wimbledon champion who holds all four Grand Slam titles, will play Britain's James Ward in the first round.

Murray, the 2013 Wimbledon winner, will face fellow British player Liam Broady in round one.

Federer, playing in his 18th Wimbledon, will open against Argentina's Guido Pella.

Djokovic could face American Sam Querrey in the third round and David Ferrer in the fourth. Raonic, a big-serving Canadian working with John McEnroe, could provide another stiff test in the quarterfinals.

Djokovic is the first man to hold all four Grand Slam titles simultaneously since Rod Laver in 1969, and the first to win the first two majors of the year since Jim Courier in 1992.

Murray defeated Djokovic in straight sets in the Wimbledon final three years ago, but he has not won a major since. He won the Queen's Club grass-court tournament last week for a fifth straight time and is again working with coach Ivan Lendl.

Wawrinka could meet former semifinalist Juan Martin del Potro in the second round. The free-swinging Argentine has been beset by injuries and will be making his first appearance at Wimbledon since 2013.

Perhaps the most intriguing first-round men's matchup has young Austrian star Dominic Thiem vs. 32-year-old German Florian Mayer. It will be a rematch of their semifinal last week in Halle, Germany, which Mayer won in straight sets.

In the women's draw, Williams could face third-seeded Agnieszka Radwanska in the semifinals, with French Open winner Garbine Muguruza in line to play No. 4 Angelique Kerber.

Serena Williams will open her bid for a seventh Wimbledon title against a qualifier or lucky loser who has yet to be determined.

Since losing to Vinci at the U.S. Open, Williams fell to Kerber in the Australian Open final and to Muguruza in the French Open final. She is one away from equaling Steffi Graf's Open era record of 22 Grand Slam titles.

Williams' possible route to the final could see her face Christina McHale, Kristina Mladenovic and the formerly top-ranked Svetlana Kuznetsova before meeting Vinci and Radwanska.

Muguruza, who lost to Williams in last year's final, has an intriguing opener against Camila Giorgi.