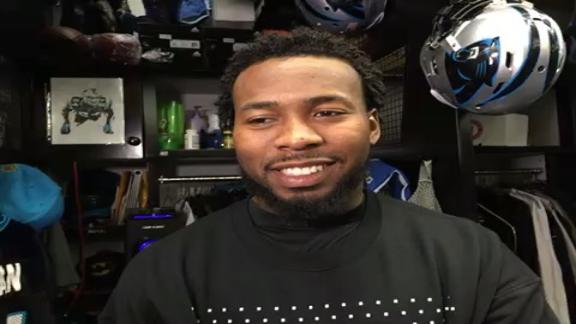 EAST RUTHERFORD, N.J. -- Giants wide receiver Odell Beckham Jr. said Thursday that his "Why so serious?" joker cleats from Monday night's game in Miami had nothing to do with Carolina cornerback Josh Norman and even downplayed their highly anticipated matchup this weekend at MetLife Stadium.

"As far as I'm concerned, the Giants play the Panthers," Beckham said. "There's 11 guys on the field and everyone has a one-on-one matchup."

Down in Carolina, Norman seems to be much more fired up about the matchup, telling reporters there he got "chill bumps" when he started his preparation for the game.

"I was like, man, I'm very much anticipating this matchup," Norman said. "Looking at some of the stuff my opponent possesses, man, it's enticing. It looks very edible."

Norman has referred to himself as "Batman" and said the symbolism of Beckham wearing Joker cleats means something to him. But Beckham seemed genuinely surprised by the idea.

"I wore those last week," he said.

Beckham also wore Peanuts-themed Charlie Brown and Snoopy cleats for a recent game and said he has a large collection of different shoes and will wear different pairs each week.

"It's just fun, a way of expressing yourself," Beckham said. "Someday I'll be able to look back at them and remember special moments, 'What did I do when I wore these?'"

Beckham was far more enthusiastic about what Carolina coach Ron Rivera said about him Wednesday, comparing parts of his game to the great Jerry Rice.

"To be mentioned in the same sentence as Jerry Rice is still shocking to me," Beckham said. "That's the direction you want to go. I'm nowhere near there, but I do appreciate the compliment."

He also said it was "awesome" to be the leading Pro Bowl vote-getter among fans at wide receiver.

"I appreciate everyone who voted," he said. "You want to be able to accomplish these things, but obviously the goal would be to be in the Super Bowl and then have to settle for the Pro Bowl."