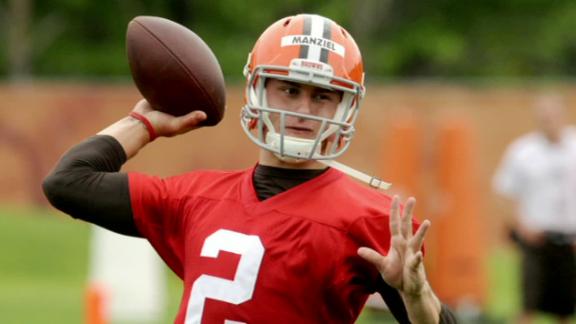 Cleveland Browns quarterback Johnny Manziel was selected by the San Diego Padres in the 28th round of the Major League Baseball draft Saturday -- the 837th player taken.

Manziel was listed as a shortstop for Texas A&M, although he never played for the Aggies as he focused on football.

Manziel, who became the first freshman to win the Heisman Trophy in 2012, was taken by the Browns with the 22nd overall pick in the NFL draft last month.

The quarterback took to Twitter on Saturday afternoon to express his excitement:

Big thank you to the @Padres and @padresmikedee for selecting me in the MLB draft. What a great day! pic.twitter.com/MaTKVZ5JqY

- Mike Dee (@PadresMikeDee) June 7, 2014"It was kind of, 'Why not,'" Padres general manager Josh Byrnes said Saturday before the Padres hosted the Washington Nationals.

In May 2013, Manziel visited the Padres when he was in San Diego to work with a quarterbacks coach.

"He certainly loves baseball," Byrnes said. "We kind of talked about it at that time, 'Do you want us to draft you?' He said, 'Yeah, absolutely.'"

It is unlikely Manziel will ever play, as no 837th pick in the June draft has ever played in an MLB game, according to ESPN Stats & Information.

Manziel played baseball and football at Tivy High School in Kerrville, Texas, and asked Texas A&M coaches about being part of the baseball team before winning the Aggies' starting quarterback job as a redshirt freshman.

Earlier this week, Manziel -- decked out in an Indians jersey -- was set to throw out the first pitch in Cleveland before the Indians played Boston. His toss was washed out by rain that delayed the start.

In May 2013, Manziel took batting practice with the Padres at Petco Park and tossed out a football-style first pitch, as he dropped back, scrambled to the side of the mound and floated a bootleg "pass" to San Diego outfielder Mark Kotsay, who caught it behind his back with his glove.

On Manziel's first swing in batting practice, the bat flew out of his hands, but he settled down and later drove a pitch off the right-field wall.

Padres closer Huston Street, who pitched at Texas and whose late father, James, played quarterback for the Longhorns, liked the pick, even if Manziel did play for the Aggies.

"I'm a fan. I think he's an exciting player," Street said. "I think he's good for sport. I think he plays hard. I don't know if he'll ever wear a Padre uniform, but it sure is exciting that the organization took him. I know he hung out here last year a couple times and everybody really enjoyed his presence. Everybody liked him. I came away from that day thinking, 'Man, that's a good dude, that's a cool guy.' It seemed like he was a very focused, mentally strong guy. He wanted to do something. We know what he can do in football.

"Heck, if he wants to come out here and hang around before games ... I don't know if they let 28th-round picks do that," Street said. "But he's a great athlete. I don't think anybody expects to see him in the big leagues, but maybe he's going to try and do both. I don't know. If he does, he's one of the more competitive people I've been around. We'll see what happens with his football career. He's potentially got a baseball one."

Street isn't sure whether Johnny Football would try both sports.

"I would tell him to don't try to be a jack-of-all-trades and a master of none. But at the same time, it's been done before. I don't know about at the quarterback position. A little bit tougher position," he said.

Another notable draft pick Saturday occurred in the 29th round, when the New York Yankees selected the son of former closer Mariano Rivera. With the 872nd pick, the Yankees chose Mariano Rivera III, a right-handed pitcher out of Iona College.