Parsons: Harden is MVP at this point 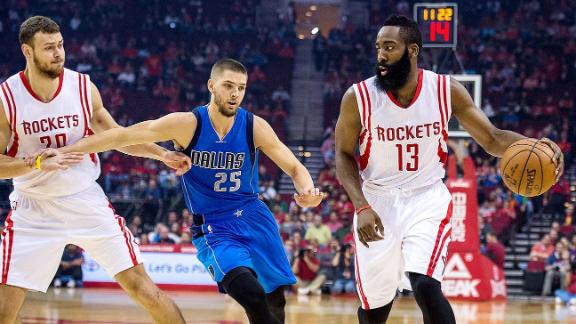 HOUSTON -- If Chandler Parsons had a midseason MVP vote, it would go to former teammate James Harden.

"For sure. He's the best player in basketball right now," Parsons said before his Dallas Mavericksfell 99-94 to Harden's Houston Rockets on Wednesday night. "The things he's doing are incredible. The scouting report is focused in on stopping him and you see he's still getting 30 a game. It's impressive."

Harden leads the NBA in scoring with 27.6 points per game and is averaging 5.6 rebounds, 6.8 assists and 2.0 steals. He's the primary reason the Rockets had a 32-14 record after Wednesday's game despite co-star center Dwight Howard missing several games due to injury.

"It doesn't really surprise me," Parsons said of Harden's season so far. "I saw firsthand how talented he is. He works extremely hard. He's playing better defense this year. He's leading their team. He's hitting tough shots. There's not much he's not doing.

"I'm happy for him. Obviously, I don't want him to play well tonight, but I'm happy how he's playing."

Harden and Parsons had a tense exchange via the media this summer after the Rockets declined their right to match the Mavs' three-year, $46 million offer to Parsons in restricted free agency. Parsons took offense to Harden characterizing him as a replaceable role player, calling it a "pretty ridiculous statement."

However, they smoothed over any hard feelings during their time together in Team USA's training camp and consider each other friends.