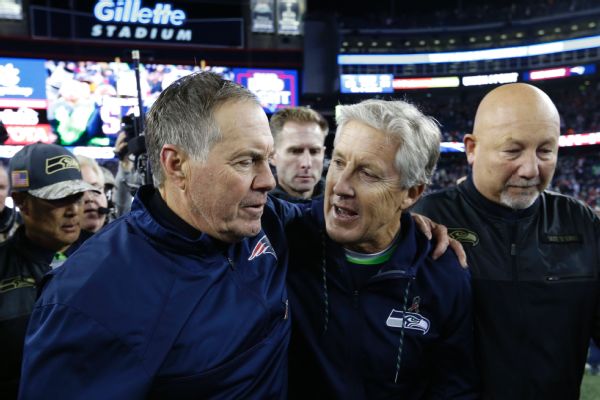 Seahawks coach Pete Carroll was asked Monday to describe the environment at Gillette Stadium during Seattle's31-24 victory over the New England Patriots.

It appears that he came away unimpressed.

"OK," Carroll said during the "Brock and Salk" show on 710 ESPN Seattle. "It's not a great place. They weren't nuts. It's because they're so used to winning. There was a time when they kicked their last field goal to go ahead, and it was like a round of applause for the nice effort. Gosh, our guys would be going berserk. We're so hungry for it. It's a gorgeous setting, beautiful arena and the fans, just the whole thing. It's really classy."

Carroll coached the Patriots from 1997 to 1999 before getting fired.

He was asked if Sunday night's victory had any special meaning to him personally.

"It was pretty fun. I've gotta admit, I haven't had more fun just enjoying a win, really," Carroll said. "So there's some stuff in there somewhere. But it was a freakin' blast. The game was, the way that people were yelling at me walking on and off the field."

Carroll said most of the heckling had to do with the way Super Bowl XLIX ended, with Patriots cornerbackMalcolm Butler'sinterception of Seahawks quarterbackRussell Wilson.

"There was a lot of, 'Thanks for throwing it.' That kind of stuff, all that kind of garbage," Carroll said. "They were just being themselves. It was great. It was classic."

Meanwhile, on the injury front, Carroll said running back Thomas Rawls is "ready to go" and will practice to play on Sunday against the Philadelphia Eagles. Rawls has been sidelined since Week 2 with a fibula injury.

Wilson, Baldwin hook up for threeTDs
Russell Wilson throws a pair of touchdown passes to Doug Baldwin in the second quarter, and the two connect again for another touchdown in the fourth quarter.