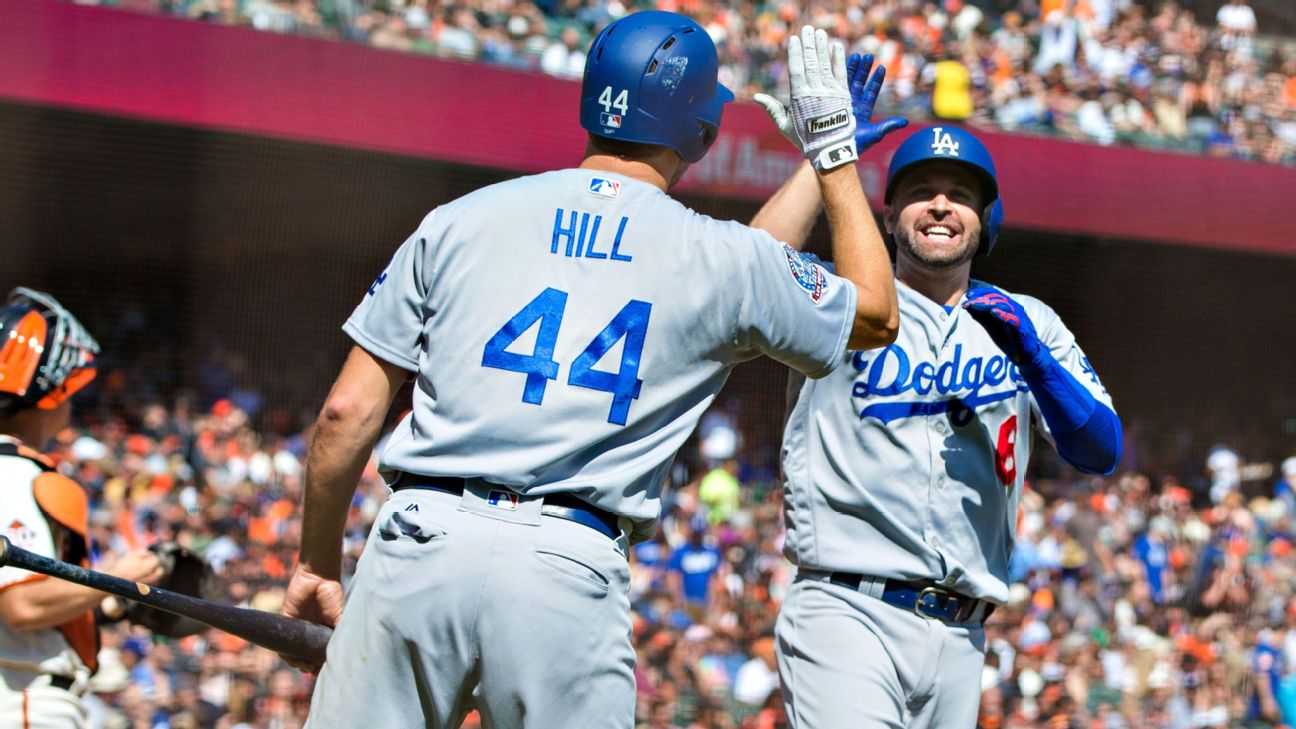 ESPN
With a double dose of tiebreaking action on tap on ESPN on Monday, the postseason picture hasn't come entirely into focus just yet. But as we head into the high stakes of Game No. 163 for four teams and the full playoff picture beyond, we asked our ESPN analysts what they expect to shake out on Monday -- in the wild-card games and in the rest of October's action.

What are your predictions for the tiebreaker games?

David Schoenfield: Brewers 4, Cubs 3. The Brewers will aim to get six or seven innings from Corbin Burnes, Josh Hader, Corey Knebel and Jeremy Jeffress. And Christian Yelich will homer because that's what he does.

Dodgers 5, Rockies 2. Walker Buehler has a 1.70 ERA and .167 average allowed over his past 11 starts. The Rockies struggle to score runs on the road. And the Dodgers aren't the Phillies.

Sam Miller: Even in a genre as reckless as the Postseason Predictions Roundtable, I can't go so far as to predict the outcome of one-game matchups between two by-definition-evenly-matched teams playing in an extremely emotional format. I'll go only so far as to predict this: At least one manager will do something that any other day of the year would go unnoticed, but on this day will be obsessed upon by us all --especially if it doesn't work.

Bradford Doolittle: The Dodgers handled the Rockies the last time they were in L.A. and are the better team, so it's hard to pick against them. That's especially true with the expanded rosters that will allow Dave Roberts to dictate matchups.

I'll go with the Cubs over the Brewers, mostly because it's at Wrigley. I like the early-game matchups between the Cubs' hitters against the Milwaukee starter. But if this becomes a bullpen game, the pendulum swings in the Brewers' direction.

How much will playing a tiebreaker impact each team's postseason chances?

Schoenfield: It could be a huge impact. Note that of the seven previous teams to win a tiebreaker game in the wild-card era, only the 2007 Rockies reached the World Series. Maybe that means the Braves will win the National League.

Miller: It's obviously hard to say, but given the pitching assignments -- at least the ones we know -- the best answer is: probably not much. The Game 163 winners won't have their playoff rotations disrupted (with, again, the possible exception of the Brewers), and the two days' rest before the National League Division Series begins Thursday, plus and the extra off days baked into the playoff schedule, should allow for quick resets. It's worse for the Game 163 losers, as three of the teams (including, we'll speculate, the Brewers) could burn their preferred wild-card-game starters in Game 163, with the fourth -- the Cubs -- already worn down by one of the most grueling September schedules in recent memory. But blunting this disadvantage is the fact that both wild-card teams will be in the same boat by playing the extra game.

Doolittle: The biggest impact is on the Brewers because of how reliant they are on their bullpen. Playing one game before the NLDS, much less two, makes it that much more challenging for Craig Counsell to manage the workloads of Josh Hader and Jeremy Jeffress. After that, I'd have the biggest concern about the Dodgers, who need to keep Kenley Jansen upright through the World Series.The Cubs and Rockies are better situated to get long outings from starters who get their bullpen usage back in line.

Whom would you start in the wild-card game if you were the Yankees and A's?

Schoenfield: If I'm the A's, I totally bullpen this game. For them, it seems Liam Hendriks is their "opener," so that works for me. If I'm Aaron Boone, I'm saving J.A. Happ for two starts against the Red Sox (who hit worse against lefties), so I go with Masahiro Tanaka. He has been very good the past two months, he has pitched well in the postseason before and you're going to rely on your bullpen anyway. Just seems Luis Severino is more likely to have a bad start given his shaky second half.

Miller: This becomes a less relevant question every year, as the weight of 27 outs -- especially in a one-game "series" with off days buffering each side -- is no longer mostly on the starting pitcher's shoulders. Each team's pitching decisions will be fluid and the hooks will be quick, and whether the starting pitcher is on or off that day, he'll probably be out sooner than later. With that said: Masahiro Tanaka has pitched well this month, has started a wild-card game before and has pitched well in Yankee Stadium in his career, so I'd start him over the red-hot J.A. Happ. The A's don't really have the right-handed, ground ball-oriented, strikeout pitcher the situation calls for, so I'd probably go with Yusmeiro Petit for as few as three outs, followed by a bullpen game.

Doolittle:Luis Severino threw well enough his last time out that I'd feel good about him. He's the best the Yankees have and is the most likely to shut down the A's for four or five innings before that bullpen takes over. I'm not sure it matters that much whom the A's go with -- whoever it is, the leash will be very short.

What's the one matchup you hope we see this postseason (could be player-pitcher or could be team vs. team, whichever you like)?

Miller: I generally can't handle Coors Field -- the effect of altitude on baseball generally makes me feel off-balance and slightly itchy. But I would love to see Mookie Betts play in Coors Field. He's not a player whose greatness is confined to the moment of contact in the batter's box; he thrives when he has space to move, to run, to veer and to accelerate. Coors Field just has so much space, and I would expect Betts to color it all in like a roller brush.

Doolittle: Call it geographic bias, but I'd love to see a Brewers-Cubs division-series showdown. It would be a chance for the Brewers to grab some of that glaring Cubs spotlight. Plus those teams don't really like each other. We don't have enough of that sort of thing in baseball these days.

Who do you think will be the breakout star of this October?

Schoenfield:Alex Bregman is already a World Series champ and had a breakout regular season, but he has a Jeter-like ability to come up big in the clutch. If he's already a star, how about Walker Buehler? Maybe the rookie carries the Dodgers instead of Clayton Kershaw.

Miller: Anybody I name is just as likely to go 1-for-12 in a three-game sweep or give up five runs in his lone start. Baseball doesn't stop being baseball. But the one thing that does change about baseball in October is that the best relievers will be used a lot more -- and in situations so tense and unprecedented following the regular season that their performances will seer into our brains. So: Brad Hand or Adam Ottavino or Josh Hader or Chad Green or Collin McHugh or Carl Edwards are fine guesses.

Doolittle: The Christian Yelich bandwagon just keeps picking up steam. Could he be playing any better as the playoffs dawn? He's not an attention-seeker, which should make him even more alluring on the national stage.

After they stumbled down the stretch, do you still think the Cubs and Dodgers are the teams to beat in the NL?

Schoenfield: Dodgers, yes, but the Cubs have some minor issues with Kris Bryant's health and lack of power down the stretch and possible concerns about the bullpen (although Jesse Chavez could be the secret weapon).

Miller: If they make the NLDS, the Dodgers probably are, but, to be clear, being the favorite in a five-team race means most likely losing. The Dodgers' record doesn't reflect it, but they've hit and pitched better than any other NL team this year. Their record doesn't reflect it because they have hit terribly in clutch situations and coughed up games in relief, and it's a lock that the team that wins the NL will hit well in clutch situations and not cough up games in relief this month. So the great question is whether those things are innate to the 2018 Dodgers or just a phase they went through for parts of the regular season.

Doolittle: Sure. Both teams have been baffling at times this season, but here they are. They still have the most talented rosters in the league and the most playoff experience. There's no compelling reason to view anyone else as the favorite. I still think the Dodgers are probably the best on-paper club, and they've been playing pretty well. It's just that the Rockies stopped losing for more than a week.

Which 100-win team do you think will go further: Boston or Houston?

Schoenfield: Chris Sale's shoulder and velocity seem like enough of a question mark that I'll say the Astros. The Houston pitching staff is the deepest and best of any team -- the bullpen is loaded this year -- and we've seen what the offense can do in October.

Miller: There's no real, significant distinction between them, and it's especially hard to say without knowing who the Red Sox's first-round opponent will be. The measurable difference between these teams might actually be smaller than the single extra game of home-field advantage the Red Sox would get in an ALCS meeting between the teams. That said, later in this roundtable I think I'm going to pick the Astros to win it all, so ...

Doolittle: Houston. I know it feels like Boston's year, but the Astros are the more complete team, and Chris Sale's injury problem is a major X factor for Boston. Also, the Astros obviously have been there, done that.

Who is the player under the most pressure entering the postseason?

Miller: There's always going to be a case for the Indians -- the longest active championship drought and the shorter window that even a smart small-market team typically has -- but to me it seems clearly to be the Dodgers. Until they win a World Series, they're just that team that outspent everybody else in baseball for six years (and counting) and couldn't win the Big One. Kershaw, the best pitcher of his generation, carries the same baggage. And while it has been about 40 years longer since Cleveland won the World Series, it has been an entire generation for the Dodgers, which is functionally almost as psychologically scarring.

Doolittle: Probably Kenley Jansen. He's had such an up-and-down season, but he remains the one irreplaceable player on that deep roster. The Dodgers need him to do what he always does in the postseason, and there is 30 years of baggage weighing down that franchise.

Who is your World Series pick (and why)?

Schoenfield: Astros over Dodgers. I'll stick with my preseason pick. A rematch that would be worth it.

Miller: I think the Astros are probably the best team in baseball right now, but the simplest prediction is that whichever team's bullpen gets hot will probably win it, and I'd never try to predict four weeks of relief pitching.

Doolittle: Astros over the Brewers. Houston's pitching staff is so loaded and the hitters seem to be in a good place as the postseason begins. All of my metrics anoint the Astros as the clear favorite, and I can't think of good reason to pick against them. Picking Milwaukee to win the National League is really just a nod to how crazy the season has been in the senior circuit. Well, it's more than that. The Brewers are firing on all cylinders and now have the star power to match up with the Cubs and Dodgers. 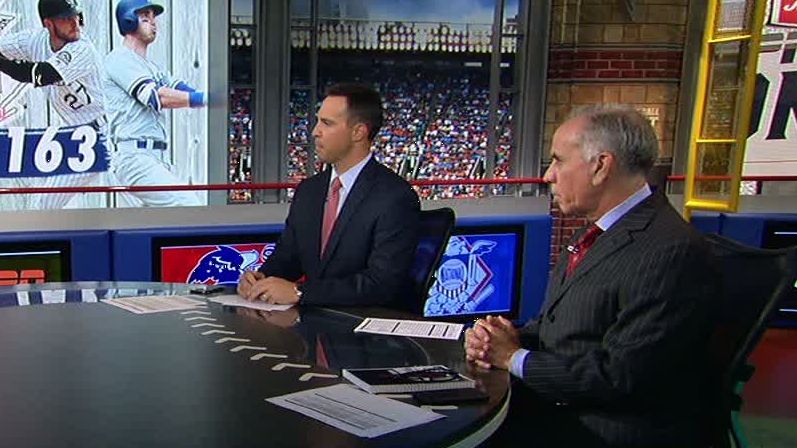