Raiders have bigger hurdles than gambling in potential Vegas move

With his chances of a move to Los Angeles dwindling after the events of an owners meeting in December, Oakland Raiders principal owner Mark Davis has been circling around a groundbreaking relocation to Las Vegas -- a scenario that has a unique set of obstacles to clear in order to make it a reality.

On Thursday, Davis attended a meeting with Nevada tourism to discuss a stadium project that could be a future home to the Raiders. The proposed 65,000-seat, domed stadium is projected to cost $1.4 billion and would be located on a 42-acre lot on Tropicana Avenue, just a few blocks off of the Strip.Davis reportedly told the tourism committee that the Raiders would contribute "half a billion dollars" to the project.

The NFL has shunned Las Vegas in the past because of its legal sportsbooks, and fought hard to prevent other states from legalizing sports betting in the United States -- and from the outset, that would seem to be one of the biggest hurdles in any discussion of a Las Vegas Raiders franchise.

At the same time, the NFL is comfortable enough with the legal sports gambling in the United Kingdom to play regular-season games at Wembley Stadium, and it's taking steps to put a franchise in London -- seemingly spotlighting the league's inconsistent stance on sports betting, but also showing that gambling might not be the biggest road block to making this move work.

A big push is coming from casino magnate Sheldon Adelson, the chairman and CEO of the Las Vegas Sands Corporation, and real estate agency Majestic Realty. Under the current proposal, the stadium project would be funded partially by the public, with money earmarked for a new convention center diverted to the stadium.Adelson owns one of the largest convention centers in Las Vegas, the Sands Expo and Convention Center.

It's a hot-button topic for some Las Vegas locals, as is the case any time the controversial Adelson is involved, and it's expected to face stern opposition from competing interests with deep pockets.

While the politics play out, any concern over sports betting, which traditionally has been an automatic deal-breaker for the NFL when it comes to Las Vegas, seems to be taking a back seat.

"We've had other cases, whether it's hockey or basketball or soccer, that the gaming issue was a forefront stumbling block," said Jay Kornegay, vice president of race and sports at the Westgate Resort and Casino and a 20-year Las Vegas veteran. "This time around it really hasn't been discussed. And I think that's surprising that somehow the sports gambling aspect hasn't become a major hurdle."

In 2013, as Las Vegas officials began discussions of building a stadium capable of hosting an NFL event, a league spokesperson told the Las Vegas Review-Journal that it likely wouldn't be interested in holding a game in the city because of sports betting. The NFL has sued New Jersey Gov. Chris Christie twice to stop his efforts to bring legal sports betting to his state's casinos and racetracks, and commissioner Roger Goodell has reiterated that the league remains in opposition to expanding legal sports betting in the U.S.

But there are other factors in play when trying to determine how big an issue gambling is, beyond playing a few yearly games in venues where sports betting is legal like London; 28 of 32 NFL teams have marketing or sponsorship deals with daily fantasy sports, and Dallas Cowboys owner Jerry Jones and New England Patriots Robert Kraft even have equity in prominent operator DraftKings. Daily fantasy sports meets the definition of sports betting by Nevada gaming statutes, and requires a gaming license to operate in the state.

Despite its opposition to legal sports betting, the NFL has no policy preventing a franchise from relocating to any specific city, including Las Vegas; any move simply requires approval by two-thirds of owners. Goodell has said the league would have to look at the gambling, if the Raiders were to move to Las Vegas, and The New York Times reported that many owners are opposed of a team in Las Vegas "because of the taint of gambling."

Even if a move to Las Vegas is greenlit, the NFL still could attempt to prevent the state's sportsbooks from taking bets on Raiders games. Nevada Gaming Commission regulations allow for a professional sports governing body to submit a written request that wagers be prohibited on games involving a team with a home in Nevada. The request must be received 30 days before a season or an event, and the commission must approve the request.

It's happened several times in the past -- most recently in 2007, when the NBA All-Star Game was held in Las Vegas. The NBA requested that betting not be allowed on the game, and the gaming commission obliged.Major League Baseball has a standing request with the NGC that was filed in 1985 and resurfaced in 2009, when minor league affiliate the Reno Aces began playing in Nevada.

The Raiders aren't the only team potentially facing this issue -- the NHL must also consider the choice, albeit much sooner, if it elects to put a franchise in Las Vegas as expected (with an announcement on that decision expected in the coming weeks). Currently, the only professional sports franchise based in Las Vegas is the 51s, the Triple-A affiliate of the New York Mets.

Nevada Gaming Control deputy of enforcement Karl Bennison told ESPN that he was not aware of any communication from the NFL or the NHL regarding the potential of bringing a franchise to Vegas.

As momentum builds toward changing U.S. laws on sports betting on a national level, some wonder if the NFL would even attempt to prohibit betting on Raiders games -- and if the league did, would Nevada officials grant the request?

Nevada State Sen. Mark Lipparelli, a former chairman of the Nevada Gaming Control Board, believes sports betting won't be a big issue and doubts the NFL would make the request to prohibit betting. "Frankly, [sports betting] won't play nearly the role that it might have 20, 25 years ago," Lipparelli said.

Lipparelli said he could see a scenario where Davis agrees to relocate the Raiders but asks that betting not take place on their games temporarily, just to avoid any immediate controversy while the transition takes place. Even then, if betting on Raiders games were prohibited at Nevada books, Lipparelli says, in reality, people would just bet on the games through offshore sportsbooks.

We're still a ways away from the Las Vegas Raiders becoming a reality. The team has a one-year lease for the 2016 season at the Oakland Alameda Coliseum, with two additional one-year options for 2017 and 2018. The aforementioned Los Angeles proposal and San Antonio have also been discussed as possible future locations for the Raiders. Can the Raiders be sustainable in Las Vegas?
Field Yates and Herm Edwards break down the possibility of the Raiders relocating from Oakland to Las Vegas and whether the move is realistic. 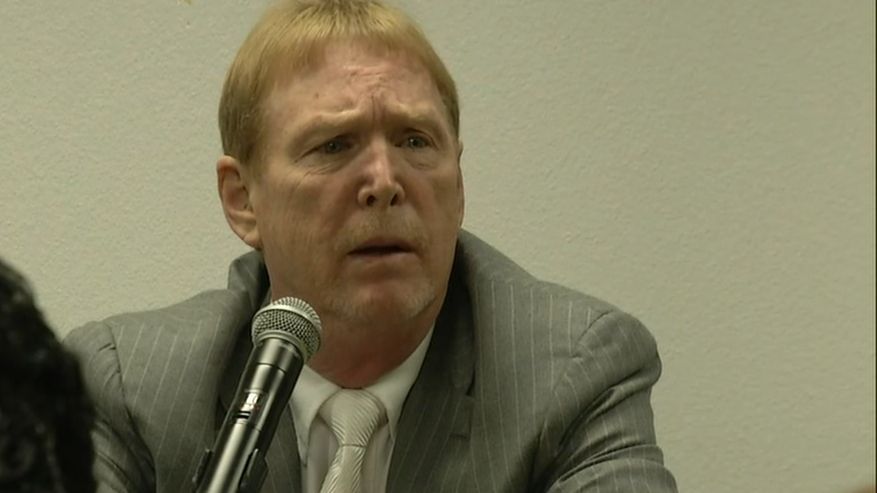