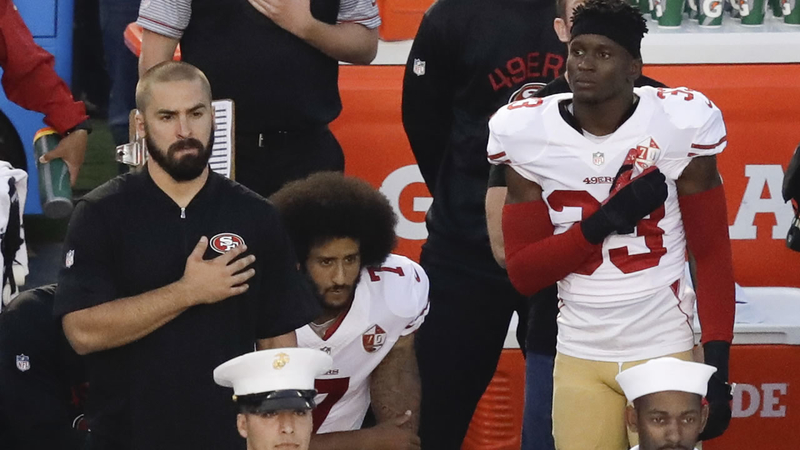 SAN DIEGO (KGO) -- 49ers quarterback Colin Kaepernick took his protest of the national anthem to Southern California. But this time, he had the eyes of the nation on him and he wasn't alone.

Kaepernick's refusal to stand up during the anthem was broadcast live, just before the start of the 49ers/Chargers game in San Diego. 49ers fans could be heard booing him, making their frustrations known ahead of Thursday night's game.

As nearly 240 sailors, Marines and soldiers stood with pride to present the flag, Kaepernick continued his protest. He kneeled down during the national anthem to call attention to what he says is the oppression of minorities across the country.

"It's coming from a good place, and I think that if people really think about the matter at hand, they'd understand why he's sitting down," said 49ers fan Rhiannon Pagan.

Others made it clear they weren't happy.

"I love the 49ers, but I'm very disappointed and hurt by Colin Kaepernick, what he did. Yo me, it's a disgrace," said 49ers

"He gets paid millions of dollars to play football, but then he's making a statement during what he has to do for a job," said 49ers fan Joseph Paraguas.

Kaepernick was joined on the sidelines tonight by 49ers safety Eric Reid, who earlier this week said he respects his teammate for doing the unpopular thing.

But some called it a slap in the face, especially on an evening when the Chargers hosted their 28th annual Salute to the Military.

"The disrespect at today's game, when it's all about honoring the service people, was over and beyond stating a point," 49ers fan Christine Funari said.

It's worth noting that Kaepernick did show support for the military throughout parts of the game; however, critics say it wasn't enough.

"It's hard to swallow, but I'm going to stay faithful, it's part of being a fan," Funari said.

It's national debate that will likely continue on for weeks to come.

Kaepernick made a new pledge to take action beyond what he's doing before the games.

Kaepernick said he has great respect for the military. He also called on San Francisco police to better address racial issues within the department.

In Oakland, another player also sat during the national anthem. Seattle Seahawks cornerback Jeremy Lane stayed seated on the bench before Thursday night's game against the Raiders.

#Kaepernick talks about #SFPD, among other issues, and how he's planning on donating $1m to comm. groups this year. pic.twitter.com/STupIsP6bI

#NOW: #Kaepernick talks about Reid joining him in protest tonight, and how he's being misunderstood. #abc7now pic.twitter.com/EjriBw6BCG

You could hear #boos for #Kaepernick as the anthem singer was getting ready to start. Fans didn't hold back anger. pic.twitter.com/MFjl6KY4RK

This #49ers fan decided to keep his son in his #Kaepernick jersey despite being in #Chargers territory. #SanDiego pic.twitter.com/wgbSpLYm2F

#Kaepernick has stressed that his national anthem protests have nothing to do with the military, but many disagree, especially in #SanDiego.

#MORE: Did you know the military sector is responsible for about 22% of jobs in San Diego County? That equals 328,000 positions. #Kaepernick

240 marines, sailors & soldiers will present the American flag on the field, ahead of tonight's #49ers vs. #Chargers game at 7p. #Kaepernick

#Kaepernick's statement on #Instagram re: socks he wore depicting cops as pigs. We're live from #SanDiego at 6pm. pic.twitter.com/l7EEPmAH4a