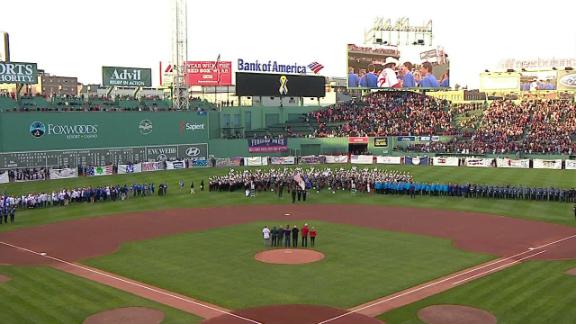 BOSTON -- Fenway Park, which served as a civic cathedral for a wounded city after the Boston Marathon bombing on Patriots Day last April, once again turned its playing field into a place of consecration and commemoration Sunday night.

In a ceremony on the eve of Monday's 118th marathon, which has attracted an estimated 36,000 entrants, the second-largest field in the race's history, the Boston Red Sox gathered once more to mourn the victims of the bombing and pay tribute to those who lifted up the entire community by their extraordinary response to the tragedy.

The outfield was ringed with canvas artwork from each of the 50 states, covered with expressions of support for the marathon bombing victims, their families and the city.

"With their work as our backdrop, we'll now take a moment to remember those who lost their lives and salute those who saved our lives and to thank those who helped us heal," said Henry Mahegan, the Charlestown High School history teacher who also serves as the Red Sox public address announcer.

Mahegan also noted "the outpouring of support" from the 92 countries who were represented at the starting line in last year's race.

And in their first public appearance in the United States since the death of 23-year-old Boston University graduate student Lingzi Lu, a spectator at the race, members of Lu's family were flown in from the northeastern Chinese city of Shenyang.

"Today, at last," Mahegan said, "we get to express our compassion to one family whom we are meeting for the first time. They have come from across the world to be here, just as their radiant daughter did to attend graduate school at Boston University. Here for the first time at Fenway Park, from Shenyang, China, let us welcome on behalf of everyone in the United States of America, the family of the beautiful Lingzi Lu."

Those representing Lu included her father, an uncle, an aunt, three cousins, two roommates from Boston University and one other relative, according to a Sox spokesman. In a gesture designed, Mahegan said, "to encourage us to press on to play our national game and to run our Boston Marathon," the Lu entourage ended the ceremony by intoning the words, "Play ball," to the sellout crowd.

Earlier in the ceremony, while the University of Massachusetts marching band and the Boston Pipers Society, a group of bagpipe players, performed the stirring "Highland Cathedral," written by two German composers, Ulrich Roever and Michael Korb, the field filled with first responders, medical personnel, volunteers and runners.

Their number included Jeff Bauman, who had both legs severed by bombs but walks with the aid of prosthetics and has written a best-selling book, "Stronger;" Carlos Arrendodo, a spectator who had rushed to the aid of Bauman and others, and his ubiquitous cowboy hat; and 74-year-old Dick Hoyt, who will be pushing his 52-year-old son Rick in a wheelchair Monday, just as he has done in 31 previous Boston Marathons. This, they have said, will be their last.

On the videoboard, meanwhile, upon a background of black, appeared the names of those who lost their lives last April: Martin Richard, Krystle Campbell, Lu, and officer Sean Collier.

Members of the visiting Baltimore Orioles and the Red Sox lined up on their respective baselines, and David Ortiz served as catcher when Jim Gallagher, the president of One Fund Boston, which has raised $80 million for the bombing victims and their families, threw out the ceremonial first pitch. Ortiz subsequently shared embraces with Governor Deval Patrick, Boston Mayor Martin Walsh, and former mayor Thomas Menino.

It was Ortiz, at the first game back at Fenway after the city had been locked down during the apprehension of the alleged bombers, who had profanely declared the city's defiance. Mahegan referenced his words Sunday night.

"It was here," Mahegan said, "that we had a great philosopher say 'this is our ... city. No one is going to dictate our freedom.' Well, at least that was part of what he said.

"In the year that has passed, our passion for a town and our compassion for our people have only made us stronger."