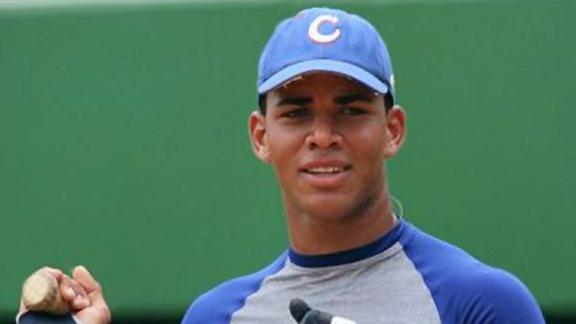 Moncada's representative David Hastings said there is no signed agreement yet but anticipates it will be done soon. A Red Sox team source also told ESPNBoston.com that no deal had been reached.

"We're still working out the language. It needs to be agreed to by all parties," Hastings told ESPN.com on Monday morning. "I'm anticipating we're going to be able to sign."

The Red Sox will pay Moncada a bonus of $31.5 million, according to multiple reports, but the overall financial commitment will be double that -- around $63 million. That's $31.5 million as a signing bonus directly to Moncada and $31.5 million to Major League Baseball as a 100 percent overage tax for exceeding their allotment of international bonus money.

Hastings, who had targeted Monday so Moncada could head to spring training as soon as possible, said he was unclear how soon Moncada would be able to get to Fort Myers, site of Red Sox spring training.

Asked if it could be as soon as Tuesday, Hastings said, "Assuming everything is signed and agreed to, I know [Moncada] would [like to be there then]."

The Red Sox, who in August signed Cuban center fielder Rusney Castillo to a six-year, $72.5 million deal, had long been considered one of the favorites to sign Moncada. The New York Yankees also targeted Moncada and reportedly conducted multiple private workouts for him, including one late last week.

The Red Sox held a private workout for Moncada about two weeks ago. Among those in attendance was Red Sox Hall of Famer and Cuba native Luis Tiant.

"Tiant is a great ambassador for Boston," said Hastings, adding that Tiant and Moncada shared breakfast before the workout.

One National League executive told Jerry Crasnick of ESPN.com that Moncada is "a younger Robinson Cano type with better speed and more positional versatility. ... Everything says this is a special kid."

As did most teams, the Red Sox worked Moncada out at third base, shortstop and second base, Hastings said. They also hit him some fly balls in the outfield.

It remains to be seen where the Red Sox will play him. The Sox would appear to be set at second base, shortstop and third base with Dustin Pedroia, Xander Bogaerts and Pablo Sandoval, and the outfield is also crowded.

Given his age and relative inexperience, the assumption is that Moncada will begin this season in the minor leagues, but the player has said he expects that stay to be short.

"This is a 19-year-old we're talking about. I would think they would want to put him in with players his own age rather than with big leaguers right off the bat," Hastings said. "They probably want him to get acclimated with people his own age, but that's not my call."

The 6-foot-2, 205-pound Moncada batted .277 in two seasons with Cienfuegos in Cuba's Serie Nacional before leaving the country last year with the permission of the Cuban government. He held a workout for a reported 70 to 100 MLB talent evaluators in Guatemala in November.

Moncada officially hit the open market last week when MLB eliminated its requirement that Cuban players obtain a license from the U.S. government before becoming eligible to sign with big league teams.

The Yankees, Dodgers, Red Sox, Cubs, Rangers, Padres, Giants, Tigers, Braves, Brewers, Rays and Angels were among the teams that have scouted Moncada or invited him in for private workouts, according to sources and media reports.

"He's got a lot of ability and projects to be a quality player," Yankees general manager Brian Cashman said. "I don't think anybody disagrees with the ability. I would doubt there's any disagreement on the scouting assessment of the player. It just comes down to how much money you were willing to commit."