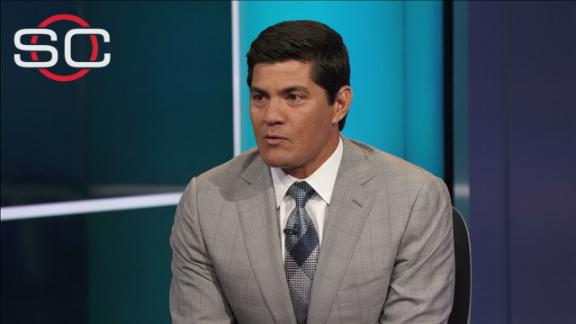 The NFL has determined that a second hit to the helmet of Carolina Panthers quarterback Cam Newtonon Thursday should have drawn a penalty flag, a source confirmed to ESPN's Kevin Seifert.

The source told ESPN that the league reviewed Brandon Marshall's hit on Newton in the third quarter and ruled that the Denver Broncos linebacker deserved a 15-yard penalty.

Marshall's hit was a violation of Rule 12, Section 2, Article 6(i) of the NFL rulebook, which prohibits a defender from using his helmet to butt, spear or ram an opponent violently or unnecessarily. The NFL also prohibits defenders from "launching" at a player in a defenseless position, as a quarterback in the pocket is considered to be.

Newton received several helmet-to-helmet blows during the Panthers' season-opening loss Thursday. Only one -- Darian Stewart's hit on the Panthers' final drive of the game -- drew a flag, but it was offset by an intentional grounding call against Newton.

Newton didn't speak out about the hits Thursday night, but several members of the Panthers and Newton's father, Cecil, have said that the reigning NFL MVP was treated unfairly by the officiating.

"I'm beginning to question the consistency of how games are being called -- and who they would call this particular play against versus this particular player," Cecil Newton told ESPN on Friday. "Was Cam treated differently from other quarterbacks? In this case, yes, he was -- clearly."

Panthers coach Ron Rivera echoed some of Cecil Newton's sentiments Friday afternoon, saying some of the hits on his star quarterback should have been called as penalties.

The NFL said in a statement Friday that medical personnel, including the unaffiliated neurotrauma consultant, reviewed video of Stewart's final-minute hit on Newton. The league "concluded there were no indications of a concussion that would require further evaluation and the removal of the player from the game." Rivera also emphasized Friday that the team followed the concussion protocol.

Cam Newton, who stayed on the field after all of the questionable hits, said he was not examined until after the game.

An NFL Players Association spokesman said Friday morning that the union was reviewing whether proper concussion protocol was followed.

Information from ESPN's Jim Trotter contributed to this report.