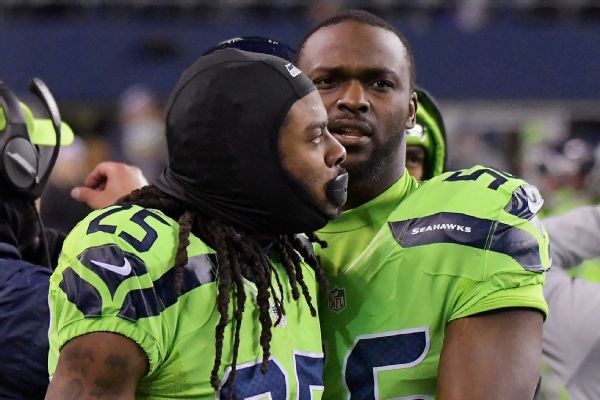 SEATTLE -- In the third quarter of the Seahawks' 24-3 winThursday night, the teamfaced a first-and-goal from the Los Angeles Rams' 1-yard line and opted to throw the ball to Jimmy Graham in the end zone.

That decision did not sit well with cornerback Richard Sherman, who engaged in a shouting match with members of the coaching staff on the sideline.

"I'm upset about us throwing from the 1," Sherman said afterward. "I'd rather do what most teams would do, making a conscientious decision to run the ball."

Sherman said he was initially talking to Pete Carroll on the sideline, but then offensive coordinator Darrell Bevell got involved.

"Yeah, I was letting [Carroll] know. We've already seen how that goes," Sherman said, alluding to the Seahawks' Super Bowl XLIX loss to the New England Patriots, which ended on a Russell Wilson interception in a similar situation.

"I'm sure you guys have seen that play enough times," Sherman said.

Sherman had to be calmed down by teammates, including linebacker Bobby Wagner, on the sideline.

"Between what he was saying and what Doug [Baldwin] was saying, Doug was saying, 'Give me the ball.' And Richard was saying something else," Carroll said. "I needed those two guys to go sit down and have a little timeout and talk it over what we should do next.

"I'm not even worried about it one bit, not one bit. I don't know. I talked to him on the sidelines, and he was jacked up and ready to go. He went out and played a good series after that. What was said in there, it doesn't matter. I know you would love to know more. You'll probably figure out more. But I don't care."

Wilson's pass to Graham on the first-and-goal situation was nearly intercepted. After a failed rushing attempt with Marcel Reece on second down, Wilson threw a touchdown to Baldwin.

"That was one of our guys who's got as much emotion and passion for this game as you could ever want," Carroll said of Sherman. "And sometimes it goes one way, you have to reel it back in. He did exactly that. He did a nice job of coming back to poise and finishing the game really well."