Richard Sherman: 'The era was over in my mind' with Seahawks 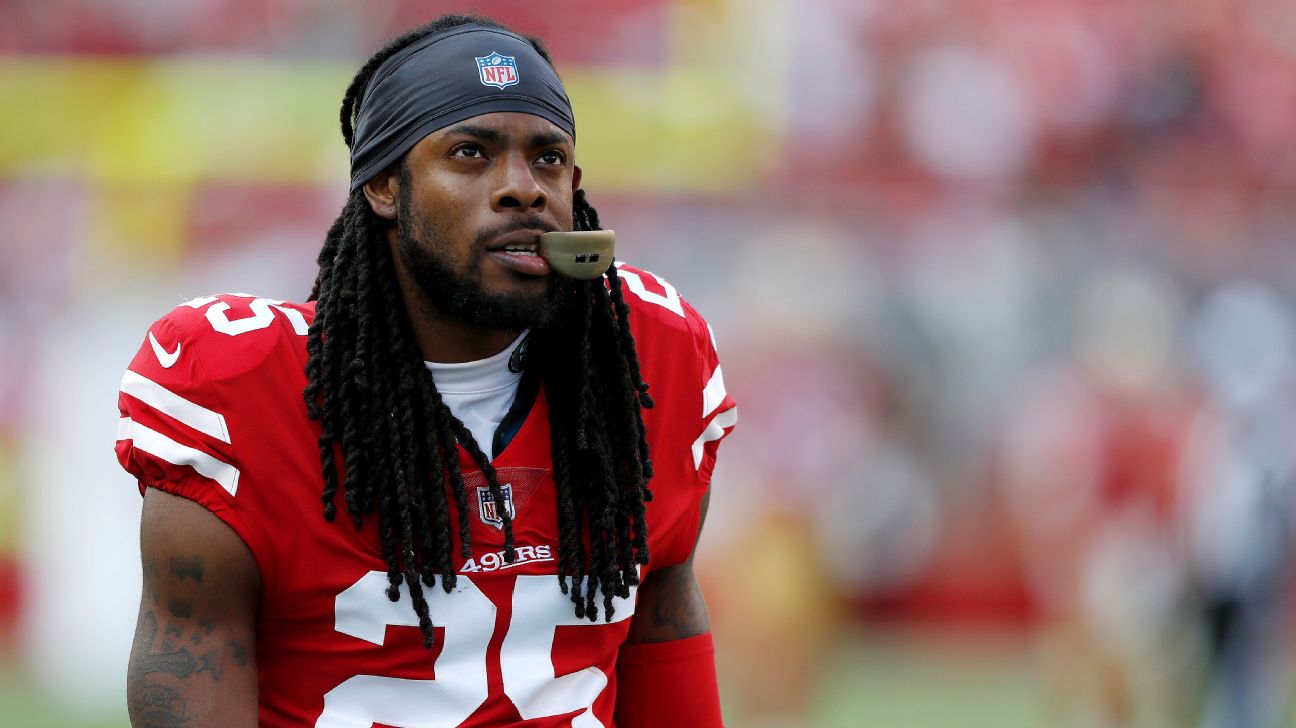 SANTA CLARA, Calif. -- Three days after Seattle Seahawks defensive end Frank Clark declared that Richard Sherman and his era is over in Seattle, the San Francisco 49ers cornerback made it clear he wasn't bothered by Clark's comments, and actually went so far as to agree with the premise.

Asked during his weekly Thursday media session to address the "elephant in the room," Sherman quickly pointed out that he didn't view Clark's comments as a big deal.

"It's like a mouse in a room," Sherman said. "It's like, 'Kids say the darnedest things.' It didn't bother me at all. It just seemed like a guy who is probably tired of hearing the same questions. Like, I wasn't even part of that game and they're still asking him questions after the game about me. I'd probably be pretty annoyed, too, if we won a game and somebody comes and asks me about a guy who either wasn't involved in this game or on my team. It's kind of weird but it doesn't bother me.

"The era was over in my mind. Obviously. I'm here."

When a reporter pointed out to Sherman that Clark's response was directed toward Sherman's previous comments that the Seahawks are a "middle of the road" team, Sherman said he didn't hear the question but that he views any season not ending with a victory in the Super Bowl as a disappointment.

The Seahawks and 49ers are slated to meet Sunday at Levi's Stadium. It will be the second meeting between the teams in the past three weeks. While the 3-10 Niners have long been out of playoff contention, the 8-5 Seahawks can clinch a postseason berth with a victory.

Clark made his comments moments after Seattle beat the Minnesota Vikings 21-7 on Monday Night Football, with an eye toward Sunday's meeting.

Before the first meeting in Seattle, a game the Seahawks won 43-16, Sherman made headlines with comments on his departure from the Seahawks, quarterback Russell Wilson and the current state of the franchise.

Sherman also said repeatedly in the week leading up to and after that game that he viewed it as just another game and that there was no additional meaning. He later softened that stance a bit with a personal blog he wrote for his website.

This time, Sherman doesn't expect there to be as much emotion.

"Just the nostalgia of seeing your friends and seeing the personnel and all the guys that you've played with [is gone]," Sherman said. "And in a couple weeks I'll see them again. We'll be out of season, we'll be doing vacations and stuff. But it was cool being back in the stadium and everything of that sort. This time we'll be back home, we'll be grinding it out. We know how it went last time and we've got a sour taste in our mouth so we'll look forward to the challenge."
Report a correction or typo
Related topics:
sportsespnsan francisco 49ersnflseattle seahawksfrank clarkrichard sherman
Copyright © 2021 ESPN Internet Ventures. All rights reserved.
TOP STORIES
Cal/OSHA votes to allow fully vaccinated workers to ditch face masks
Tracker shows how close we are to overloading power grid
Biden signs bill to make Juneteenth a federal holiday
What 1 journalist learned from a half-million 6-word essays on race
Man arrested in SF stabbing attack of 94-year-old Asian woman
2nd day of heat wave brings record-breaking temps
Bay Area heat wave: Tips for saving power during a Flex Alert
Show More
LIST: Juneteenth events in the Bay Area
2 CA Republicans voted against making Juneteenth a federal holiday
AccuWeather forecast: Heat wave, day 2 - record warmth likely
SJ mom agrees to Vegas jail transfer in son's death
Supreme Court upholds Obamacare for 3rd time
More TOP STORIES News