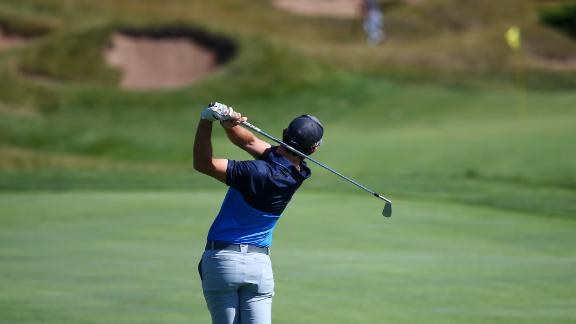 HAVEN, Wis. -- Rory McIlroy said Wednesday that he feared he had broken his left ankle when he went to the ground while playing soccer with his friends back home last month in Northern Ireland, hearing a noise that turned out to be a ligament snapping.

The injury kept him from competitive golf for the last seven weeks, but the No. 1-ranked player in the world, who returns to action on Thursday at the PGA Championship, said it would not keep him from partaking in such an activity in the future.

"Anytime I go back home, one of the things that I regularly do with my friends is to play football,'' McIlroy said Wednesday in his most extensive comments since the July 4 accident. "That was like the fourth or fifth time in a 10-day period where I had played football. I enjoy it. We all enjoy it. And it's unfortunate that it happened.

"It can happen walking off a tee box. It can happen falling off a curb on the side of the street. It can happen doing anything. And unfortunately my foot just got stuck on the turf and went over on it. And I was out a few weeks.

McIlroy said his ankle swelled to the size of a tennis ball within a matter of moments and he was later diagnosed with one ruptured ligament and a significant injury in the other. "I was lucky I didn't do more damage,'' he said.

As far as returning at the PGA, McIlroy said he played 72 holes of golf in Portugal last week as a test to see if he was ready. He had started hitting balls again on July 28 and had considered defending his title last week at the WGC-Bridgestone Invitational.

"Doing it in front of guys in the media, the eyes of the world, it probably wasn't a great idea,'' McIlroy said. "So to do it behind closed doors and to see how it reacted, we thought that was a better idea.

"Four days in a row, 72 holes, playing with no pain no swelling, no anything like that. Then we knew that, 'OK, you're ready to go.'"

McIlroy, 26, has won three times worldwide this year and finished in the top 10 at both the Masters and U.S. Open -- each tournament won by No. 2 Jordan Spieth. His last competitive round was on June 21, the final day of the U.S. Open, more than 50 days ago.

He withdrew from the Scottish Open and The Open, where he was the defending champion.

"I thought I was going to miss it more than I did,'' McIlroy said. "If anything, having to sit those tournaments out, especially the Open Championship going back to St. Andrews, which is probably my favorite venue in the world, it gave me a huge sense of perspective.

"When you're playing week in, week out and you're thinking about winning these tournaments, you get so wrapped up in what you're doing and you're own little life and your own little bubble, sometimes you forget there's a bigger wider world out there.''

McIlroy said he has not lowered his expectations this week.

"I've played quite a number of rounds of golf,'' he said. "I've been practicing for over three weeks getting my game ready, getting my game sharp. I feel like I'm playing well. Hitting it well on the range. I've taken that on to the course in practice rounds, and from there it's being able to take it from there into tournament play with a card in your hand.

"But I expect to play well. I don't see any reason why I can't bring the sort of form that I've shown in practice rounds and on the range to the tee on Thursday afternoon.''

McIlroy is grouped with Spieth and Open champion Zach Johnson for the first two rounds. They begin play Thursday at 2:20 p.m. ET.