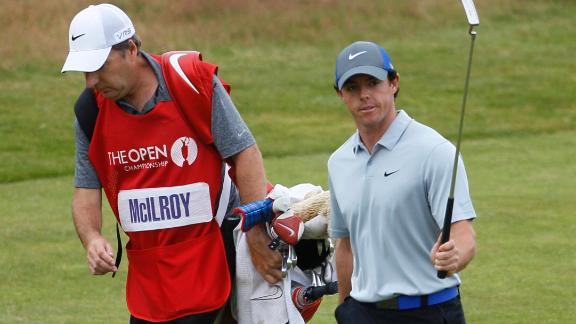 HOYLAKE, England -- Rory McIlroy knows how quickly a big lead can slip away, so he wasn't satisfied by simply restoring it Saturday in the Open Championship.

And when he reached the final hole at Royal Liverpool, he delivered his best two swings of the day.

McIlroy launched a 5-iron from 239 yards in the 18th fairway, stood back to admire the flight and then crouched until the ball rolled up to within 10 feet of the flag for his second eagle in the last three holes.

Five holes earlier, he was tied for the lead.

McIlroy left the course with a 4-under 68 and a six-shot lead, the largest 54-hole margin at The Open since Tiger Woods led by six at St. Andrews in 2000.

That final putt for eagle had the feel of a knockout punch. McIlroy walked up to the green with a swagger. When the eagle putt dropped into the center of the cup, he straightened his back and offered thousands in the grandstand little more than a defiant stare and a light fist pump.

No one has ever lost a six-shot lead in the 121 years that The Open has been contested over 72 holes. Boy Wonder would not seem to be a candidate. The last time he was in this position, he led by eight shots and won by the same margin at Congressional in the 2011 U.S. Open.

Then again, he rallied from seven shots back to win at Wentworth just two months ago.

That's about all that kept him from picturing his name on the Claret Jug, from capturing the third leg of the career Grand Slam and joining Jack Nicklaus and Woods as the only players to win three of the majors before turning 25.

"I'm not taking anything for granted," McIlroy said. "If the guys in front of me had just finished a little better -- finished the way I did -- then my lead wouldn't have been as much as it was. ... A lot can happen. And I've been on the right side of it and I've been on the wrong side of it. You can't let yourself think forward. You've just got to completely stay in the moment, and that's what I'm going to try to do for all 18 holes tomorrow."

Rickie Fowler, Sergio Garcia and Dustin Johnson face a far more difficult task. They have to track down a guy who has won both his majors in runaways.

"If I'm able to go out and get off to a good start, maybe I can put a little bit of pressure on him," Fowler said after a 68. "Because he's definitely in control of the golf tournament right now."

Fowler tried to do his part on a cloudy Saturday with occasional rain, but not nearly what the R&A expected when it went to a two-tee start for the first time in history. Fowler, who was six shots behind going into the third round, ran off three straight birdies to start the back nine and shared the lead when McIlroy made bogey on No. 12.

It all changed so quickly.

Fowler made a bogey on the 14th hole. McIlroy, playing in the group behind, drilled a 35-foot birdie putt that put his lead back to two shots.

"Rickie was just getting close to me," McIlroy said. "I could hear the cheers in front of me. I just wanted to get ahead. To hole a putt like that was huge."

And that's when he turned it on.

McIlroy blasted a drive on the par-5 16th hole and hit 4-iron from 252 yards over a pot bunker to the left side of the green and made a 15-foot eagle putt. That restored his lead to five shots, for Fowler had driven into a pot bunker and made a bogey.

Fowler recovered with a superb shot out of the pot bunker on the 18th to tap-in range for birdie. That put the American into the final group for the second straight major, both times a long way out of the lead. He trailed Martin Kaymer by five shots going into the last day of the U.S. Open at Pinehurst No. 2.

Fowler didn't get closer than four shots of Kaymer in the final round.

Garcia, who played in final group with Woods at Royal Liverpool in 2006, certainly had his chances. He was only three shots behind at the turn until missing a short birdie putt on No. 12 and failing to convert so many other chances. Garcia had a 69 and was seven shots behind, along with Johnson (71).

"It's going to be difficult," Garcia said. "But we'll give it a shot."

Johnson cut the four-shot lead in half on the opening hole, hitting wedge into 2 feet for birdie as McIlroy careless went left of the green and into a pot bunker for a bogey. Johnson, however, didn't make another birdie until the 13th hole and made three birdies over the last six holes to keep alive remote hopes.

And yet the biggest crowd belonged to Woods, the sport's biggest star who is playing his first major since back surgery four months ago. Woods narrowly made the cut on Friday, opened with two straight birdies and that was about all the excitement. He made another double bogey, another triple bogey and shot 73.

Woods was 19 shots out of the lead.

The biggest challenge for McIlroy might be to avoid looking ahead. It was hard. Asked what it would mean to be one major away from a Grand Slam at 25, McIlroy said, "It would mean a lot of hype going into Augusta next year."

"I'd be in pretty illustrious company," he said.

McIlroy Surges In Third Round
Rory McIlroy opened up a 6-shot lead heading into the final round at the Open Championship,

McIlroy Up To The Task
Rory McIlroy talks about how he keeps cool under pressure after maintaining his lead heading into the final round at the Open Championship.

Fowler Ready To Pressure McIlroy
Rickie Fowler talks about what he needs to improve on ahead of round four at the Open Championship and how he can put pressure on Rory McIlroy.