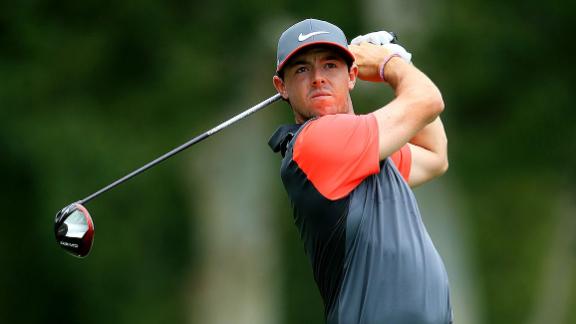 LOUISVILLE, Ky. -- A rare mistake led to a double-bogey for Rory McIlroy, but it hardly slowed him during the first round of the PGA Championship.

McIlroy admitted he was none too pleased after he snapped his second shot at the par-5 10th hole out of bounds, leading to a double-bogey 7 and a temporary state of annoyance.

A three-putt bogey followed at the 11th, but McIlroy settled down and rattled off four straight birdies -- along with another at the 18th -- to shoot 5-under-par 66 and trail first-round leaders Lee Westwood, Kevin Chappell and Ryan Palmer by a stroke at Valhalla Golf Club.

"I was very hot," McIlroy said. "Things like what happened on 10, they happen. You hit bad shots. It sort of knocked me off track a little bit because it's one of the only bad shots I've hit in a few weeks. What I was really angry about was you don't compound that error and make a bogey on the next hole with a three-putt."

But instead of letting it derail him -- as happened several times earlier this year with bad stretches of holes -- McIlroy took it as motivation.

"It's trying to use that fire as a fuel and sort of propel yourself forward," he said. "It was great. It just sort of shows where my game is mentally right now, that I was able to do that today."

McIlroy is coming off of victories at the Open Championship and WGC-Bridgestone Invitational, the latter coming on Sunday and moving him to No. 1 in the world ahead of Adam Scott.

He had eight birdies in the opening round Thursday and hit 12 of 14 fairways and 13 of 18 greens. And he felt it could have been better.

"I thought I could have made each of the putts on the last three holes," he said.

McIlroy said he is driving the ball better than he did during his hot stretch in 2012, when he won four times toward the end of the year, including the PGA Championship and the season-ending event in Europe.

He has three worldwide wins this year, but the past two victories have seen him excel off the tee and take advantage of it in the rest of his game.

"Obviously he's playing great right now," said Masters champion Bubba Watson, who played with McIlroy and shot 70. "He's probably playing the best of anybody, as the record shows the last few weeks. Very solid, in control of everything.

"Even the shots where he made bogey, he didn't get too upset. He just knew that he was playing good enough to make birdies. Then he made four in a row. Pretty good."