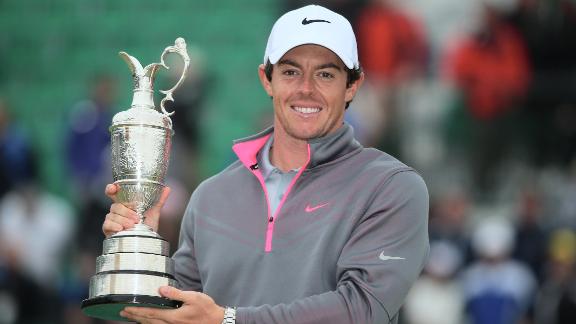 HOYLAKE, England -- Walking off the 18th green as the Open Championship champion, Rory McIlroy kept gazing at all the greats on golf's oldest trophy.

On the claret jug, his name is etched in silver below Phil Mickelson.

In the record book, he is listed behind Jack Nicklaus and Tiger Woods as the youngest to get three legs of the career Grand Slam.

And over four days at Royal Liverpool, he had no equal.

"I'm immensely proud of myself," McIlroy said after his two-shot victory Sunday that was never really in doubt. "To sit here, 25 years of age, and win my third major championship and be three-quarters of the way to a career Grand Slam ... yeah, I never dreamed of being at this point in my career so quickly."

He had to work a little harder than he wanted for this one.

Staked to a six-shot lead going into the final round, McIlroy turned back every challenge. He made two key birdies around the turn, and delivered a majestic drive at just the right moment to close with a 1-under 71 and complete his wire-to-wire victory.

In another major lacking tension over the final hour, what brought The Open to life was the potential of its champion.

After nearly two years of turmoil, McIlroy looked like the kid who shattered scoring records to win the 2011 U.S. Open at Congressional, and who won the PGA Championship at Kiawah Island by a record eight shots a year later.

Boy Wonder is back. Or maybe he's just getting started again.

McIlroy won by two shots over Sergio Garcia and Rickie Fowler to become the first start-to-finish winner since Woods at St. Andrews in 2005. Even with one major left this year, the Northern Irishman already is looking ahead to Augusta National next April for a shot at the slam.

McIlroy put an end to this major with a powerful drive down the fairway at the par-5 16th, setting up a two-putt birdie to restore his lead to three shots. He finished with two pars, tapping in for par on the 18th green.

The hard part was trying not to cry when his mother, Rosie, came onto the green with tears streaming down her face. She was not at the other two majors. Before leaving, McIlroy turned and applauded the fans in the horseshoe arena who were witness to another masterpiece.

This could have been another romp except for a shaky stretch early for McIlroy, and solid efforts from Garcia and Fowler.

Garcia pulled within two shots with four holes to play until he put his tee shot in a pot bunker just right of the 15th green. His first shot failed to get over the 4-foot sodden wall and rolled back into the sand. He made bogey, and two birdies over the final three holes were not enough. Garcia shot 66 and was runner-up in a major for the fourth time.

"I think that we gave it a good effort," Garcia said. "And there was someone a little bit better."

Fowler, playing in the final group for the second straight major, didn't do anything wrong. He just didn't do enough right to make up a six-shot deficit. Fowler played without a bogey, made three birdies on the last four holes and shot 67.

"He played awesome," Fowler said. "And it was just kind of fun to throw a few shots at him coming. To see him win was pretty cool."

It was the first time two straight majors were won wire to wire. Martin Kaymer did it last month at Pinehurst No. 2, taking the U.S. Open by eight shots.

McIlroy, who finished at 17-under 271, wasn't the only big winner Sunday. Ten years ago, his father and three of his friends each put up 100 pounds ($170) at 500-1 odds that McIlroy would win the Open Championship before he turned 26.

The kid made good on the best with a brand of golf that had him marked early as golf's next great player.

McIlroy moved up to No. 2 in the world, perhaps on his way to regaining the No. 1 ranking that once looked as if it would be his for years. He ended the 2012 season by winning his second major and capturing the money title on the PGA Tour and European Tour.

Since then, the road has been bumpier than some of the dunes at Hoylake.

McIlroy signed a megadeal with Nike and switched out all his equipment. He changed management for the second time, leading to lawsuits that are still to be decided. And after getting engaged to Caroline Wozniacki on New Year's Eve, he abruptly broke off the engagement in May with a telephone call.

His path to victory in The Open was much smoother.

McIlroy made back-to-back bogeys on the front nine and had to save par from a pot bunker to avoid a third. But he steadied himself with a birdie on the par-3ninth, and when Garcia made a 10-foot eagle ahead of him on the 10th to cut the lead to two, McIlroy answered with a two-putt birdie.

Garcia blinked when he could least afford it, leaving a shot in the bunker at No. 15 as McIlroy watched from the tee.

Jim Furyk was among four players who tied the course record with a 65 to finish fourth. Tiger Woods was long gone. He finished his 75 as McIlroy was still on the practice range. Woods finished 69th -- his worst finish over 72 holes in any major -- and wound up 23 shots behind, his largest deficit ever in a major.

Emotional Win For McIlory
Rory McIlory sits down with Tom Rinaldi to discuss his wire-to-wire win at the Open Championship.