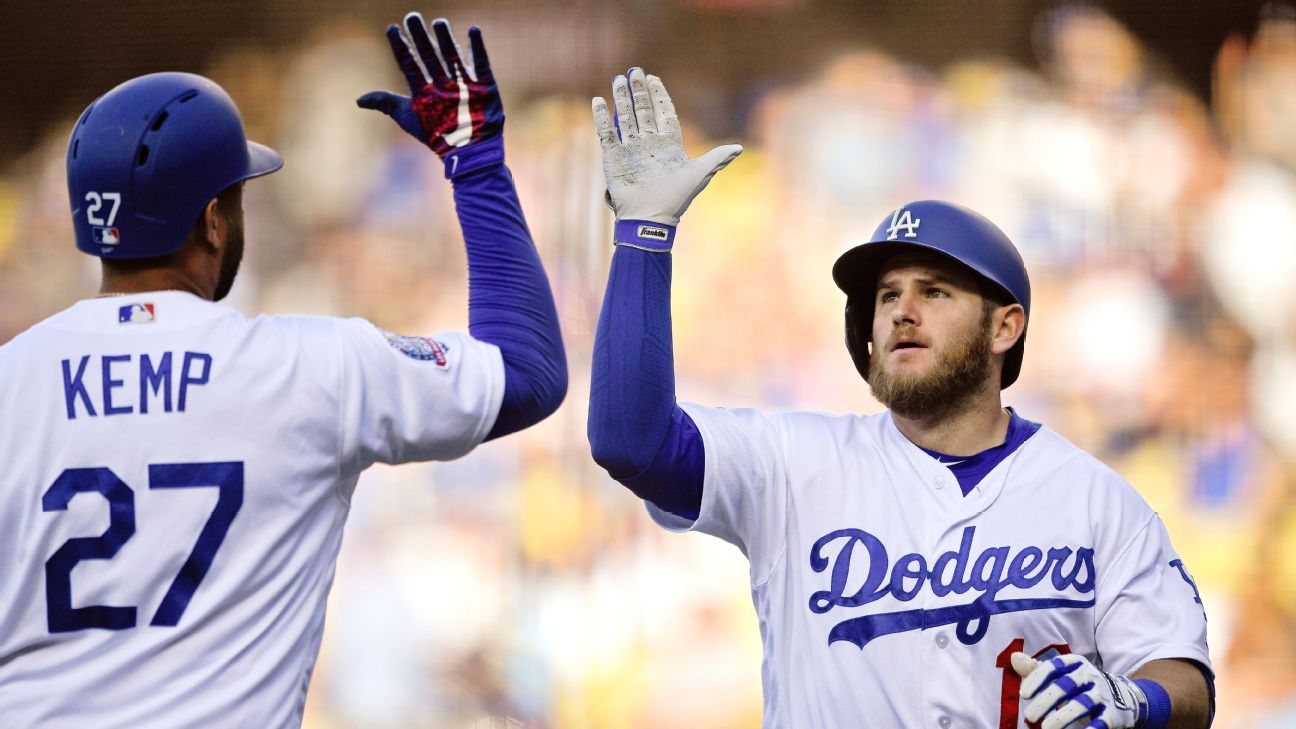 The Los Angeles Dodgers beat the Atlanta Braves 7-2 on Sunday and these three all contributed to the win:

Ross Stripling allowed two runs over 6 innings, striking out six with no walks, improving to 5-1 with a 1.65 ERA.

Matt Kemp went 1-for-4 with an RBI single and leads the National League with a .351 average and .592 slugging percentage. (Muncy actually has a higher slugging percentage but doesn't have enough plate appearances to qualify for the leaderboards.)

Heading into Sunday's game, the Dodgers' team leaders in WAR:

Just as the front office drew it up in March, I'm sure.

How did this happen? This is two seasons in a row the Dodgers have received several out-of-the-blue performances -- last year it was Taylor, Brandon Morrow and, to a lesser extent, Cody Bellinger. Is this front-office smarts or good luck? Let's see how these three -- a random bullpen guy, a Quad-A player and a washed-up former MVP candidate -- have become the heart of the 2018 Dodgers.

Stripling made 14 starts as a rookie in 2016 and wasn't terrible (4.52 ERA as a starter), but with so-so stuff and a middling strikeout rate, the Dodgers moved him to the bullpen in 2017. He made just two starts, one of those on the final day of the season, and began 2018 in the bullpen once again. With all the injuries to the Dodgers' rotation, Stripling was pressed into service. Since May 6, he's posted a 1.33 ERA over seven starts with a scintillating 53-4 strikeout-to-walk ratio.

I mentioned this after Stripling's previous start, but apparently his big key has been speeding up his arm action on his curveball, making it harder for batters to differentiate his fastball from his curve while adding more spin to the curve and making it nearly unhittable. Batters are 5-for-39 without an extra-base hit against the curveball over his seven-start stretch.

You might remember Muncy from his two seasons with A's in 2015 and 2016, when he hit .195/.290/.321. The A's released him and he spent all of 2017 with the Dodgers' Triple-A team in Oklahoma City. They brought him back, but he wasn't even on the 40-man roster until the Dodgers purchased his contract April 17. Breyvic Valera was actually the first choice from Oklahoma City (similar to last year, when the Dodgers tried a couple other players in the outfield before calling up Taylor).

Muncy always has had good control of the strike zone. While he didn't hit with the A's, his chase rate was very low. Still, he was around mostly as deep injury fodder. Well, sometimes those guys get a chance. He has made a couple of swing changes since his A's days, adding a little leg kick and lowering his hands, and now he's hitting the ball much harder.

Statcast keeps track of something called xwOBA (expected wOBA), incorporating quality of contact and the expected results with that contact. Muncy ranked fifth in the majors in xwOBA entering the day, behind only Mookie Betts, J.D. Martinez, Mike Trout and Freddie Freeman, a sign that this production hasn't been a fluke. He's hitting the ball hard and he's hitting it over the fence. Muncy played third base this weekend with Justin Turner sidelined with a sore wrist, but look for him to move back to first and Bellinger to the outfield once Turner is healthy again.

Kemp might be the biggest miracle of all. The Dodgers acquired Kemp from the Braves not because they wanted him, but because of the economic ramifications. The deal was more or less equal in salary commitments, except the Braves acquired all the expiring contracts while Kemp's remaining $43 million was spread out over two seasons, allowing the Dodgers to get under the luxury tax for 2018.

Dodgers president of baseball operations Andrew Friedman didn't pretend the deal was anything but a salary swap, and there was no guarantee Kemp would even remain with L.A. "I was very open and honest with him about what the future might hold," Friedman said when the trade was made. "It's just too difficult to say, definitively, at this point."

Kemp's defensive metrics have been lousy in recent years and he was worth minus-1.3 WAR last season. Kemp came to spring training 35 to 40 pounds lighter if you believe the reports, and played well, but the Dodgers weren't able to trade him. Then Turner broke his wrist, Kemp made the team and hasn't stopped hitting. The MVP talk is a little much at this point, but with Corey Seager out for the season and Turner having played just 20 games, Kemp's production obviously has been huge.

So, what do you think? Credit all three players for taking advantage of their opportunities. Is that a smart front office to give them those opportunities? Or has it been some good luck?

Wild West: The Mariners won yet another one-run game, beating the Rays 5-4 as James Paxton fanned 10 in seven innings and Edwin Diaz got the save. The final out came on a blooper to right field that Mitch Haniger couldn't quite corral, but Johnny Field tried to score all the way from first and Haniger threw him out by 20 feet.

The Mariners are 21-9 in one-run games, the most one-run victories through 65 games in MLB history (via Elias Sports Bureau research). Diaz has 23 saves, with 15 coming when he inherited a one-run lead:

Meanwhile, the Astros remained tied with the Mariners atop the American League West after a controversial 8-7 victory over the Rangers. The winning run scored with two out in the top of the ninth after a balk was called on Rangers reliever Keone Kela. It was the right call as Kela quick-pitched from the stretch, but plate ump Alfonso Marquez didn't initially call a balk. Only after Astros manager A.J. Hinch came out and argued did the umps confer and change the call -- which, of course, led to Rangers manager Jeff Banister getting ejected.

Here's an MVP candidate: Kemp has been great, but he's not providing value on both sides of the ball. Take Giants shortstop Brandon Crawford, who went 4-for-4 -- the Giants had only five hits all game -- as San Francisco beat Max Scherzer and the Nationals 2-0. Crawford's two-run homer in the fourth backed up the five-pitcher shutout:

Crawford has been on a tear since the beginning of May and is now hitting .338/.385/.536 while playing his usual superb shortstop.

West Coast bias: Let's just make this an all-West Division edition. The Diamondbacks beat the Rockies 8-3 to complete the sweep at Coors Field, scoring 29 runs in the three wins. Oh, Paul Goldschmidt is locked in at the plate -- finally. He doubled and tripled Sunday after homering twice Friday and twice Saturday. Over his past five games, he's gone 15-for-22 with 11 extra-base hits. In the process, he has raised his OPS from .723 to .873. From miserable season to good season in less than a week.

Good to have you back, Goldy.