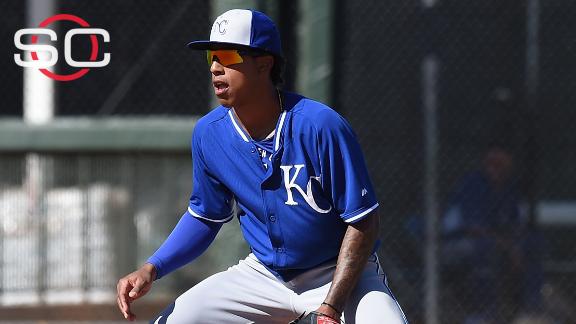 Raul A. Mondesi, the son of former Dodgers outfielder Raul Mondesi, became the first player in MLB history to debut in the World Series when he pinch hit Friday night for theKansas City Royals.

Mondesi hit for left-handed relieverDanny Duffyto lead off the fifth inning of a 9-3 loss in Game 3 with the Royals trailing theNew York Mets5-3.

Mondesi struck out swinging on the fourth pitch of the at-bat on a 97 mph fastball from starter Noah Syndergaard.

"It feels good," Mondesi said postgame. "I got a chance to get an at-bat and tried to do the best. I don't care that it was a strikeout. I'm happy. And tomorrow [I'll] just come here and try to help the team."

The Royals lead the series 2-1.

Luke Hochevarpitched the fifth for the Royals.

The 20-year-old Mondesi, who replaced outfielder Terrance Gore on Kansas City's postseason roster, is also the youngest American League player to appear in a World Series game since Claudell Washington in 1974. Andruw Jones played in the 1996 World Series as a teenager.

Royals manager Ned Yost had said the team decided to add Mondesi to the roster for flexibility, which was key given the shift to New York that put the series under NL rules for Games 3, 4 and 5.

Mondesi can play second base and shortstop. He also can bunt.

ESPN's Keith Law ranked Mondesi as the 38th-best prospect in baseball to begin the 2015 season.

"The coaches were on the idea before I was," Yost said Tuesday of the decision to add Mondesi. "We had to sit and discuss it for a long time, and finally, when I told Raul yesterday that he was going to be on the roster, he just looked at me and said, 'I'm ready.' That turned the page for me."

By making a World Series roster, Mondesi achieves a distinction never enjoyed by his father. Raul Mondesi spent 13 seasons in the majors with the Dodgers, Toronto Blue Jays, New York Yankees and four other clubs. He appeared in 1,525 regular-season games, made 6,369 regular-season plate appearances and tacked on 38 postseason plate appearances in 10 playoff games, but he was never part of a World Series roster.

Raul A. Mondesi said he talked earlier in the day to his dad in the Dominican Republic.

"He was laughing like that. It was incredible. And tonight, I got a chance to get an at-bat in the World Series."

Information from ESPN's Jerry Crasnick, ESPN Deportes' Marly Rivera and The Associated Press was used in this report.