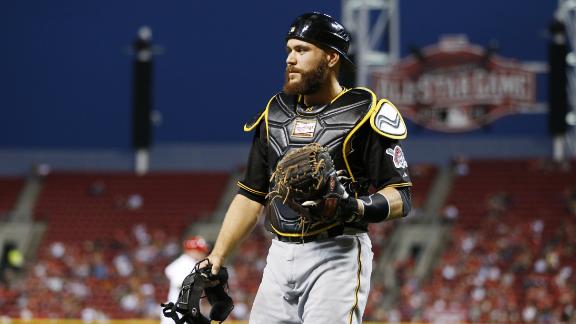 The deal, which had been earlier reported by Fox Sports, is pending a physical exam.

In 2014, the 31-year-old Martin had an offensive season reminiscent of those at the beginning of his career, batting .290 with 11 home runs and 67 RBIs for the Pittsburgh Pirates, while also setting a career best in on-base percentage (.402).

Martin, who was born in Toronto, also led the majors by throwing out 37 attempted base stealers and finished fourth overall with a caught-stealing percentage of 38.5 as he threw out 37 of the 59 baserunners attempting to steal with him behind the plate.

In nine seasons with the Los Angeles Dodgers, New York Yankees and Pirates, Martin has hit .259 with 119 homers and 540 RBIs.

The Pirates made a one-year qualifying offer of $15.3 million to Martin for 2015, which he rejected, ensuring them draft-pick compensation. The Pirates traded for Yankees backup catcher Francisco Cervelli last week.

The Blue Jays used four catchers in 2014. Dioner Navarro, Josh Thole, Erik Kratz and George Kottaras (who had three at-bats as a Jay) combined to rank 11th among MLB catching contingents with a .659 OPS.

Blue Jays right-handerMarcus Stromanwelcomed Martin to the team on Twitter.

The Blue Jays open their Grapefruit League schedule against the Pirates on March 3.