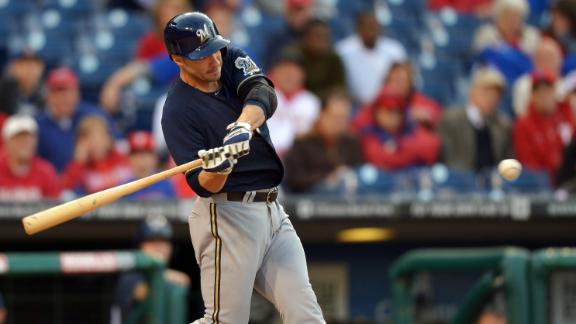 PHILADELPHIA -- Only Ryan Braun knows for sure how much his right thumb throbs when he swings a bat. But he has made it eminently clear that taunts, chants and boos aren't going to faze him.

Philadelphia fans, true to their reputation, gave Braun the business throughout the Phillies' 2014 home opener Tuesday. Braun responded in classic "bring it on" mode. He hit three home runs, drove in seven runs and made a dazzling catch in right field to lead the Milwaukee Brewers to a 10-4 victory at Citizens Bank Park.

"I love it," Braun said after the game. "It's great. Seriously, as a competitor, I really do enjoy it. This is a challenging game for all of us, and it's a long season and playing in an environment like this is motivating.

"I wouldn't say I want it to be like this, if it's my choice. But I don't have much of a say in how the fans are going to react. I might as well make the best of it and use it to my advantage as motivation."

Braun, the 2011 National League MVP, expected to be a target for verbal abuse on the road after serving a 65-game suspension to end last season in conjunction with his involvement in the Biogenesis performance-enhancing drug scandal. As luck would have it, Milwaukee's first two road series were in Boston and Philadelphia, two hard-boiled sports towns not exactly known for their compassion toward visiting players.

The 45,061 fans in attendance Tuesday didn't all come to wear out Braun, but it certainly seemed that way at times. Braun received a prolonged round of boos when the Brewers were introduced along the third-base line before the game. He was booed after making a diving catch on Carlos Ruiz to end the second inning, and singled out during each at-bat with boos and periodic chants of "Ster-oids! Ster-oids!" The reception was, by all accounts, rougher than the treatment he received during the Brewers' opening road series at Fenway Park over the weekend.

"I don't know what's going through his mind, but I guarantee he's aware this is going to happen everywhere he goes," Brewers third baseman Aramis Ramirez said. "It's something he's going to have to deal with, and I guess he's pretty good at blocking it out.

"I think he's going to be OK. He's strong mentally, and he showed it today. Today was the worst. I thought Boston was bad, but here it was really bad. The Philly fans can boo some people. We knew he wasn't going to get a warm reception."

It has been an eventful spring for Braun. He expressed remorse for his past actions upon arrival in the Cactus League, reiterating his desire to move past the PED stigma that has severely tarnished his reputation in the game. Then he hit .417 in spring training despite making the transition from left field to a new position in right.

Milwaukee fans made their pro-Braun sentiments clear with a lengthy standing ovation for him on Opening Day at Miller Park, but things hadn't gone so well since then. In recent days, Braun has been bothered by an inflamed nerve in his right thumb and forefinger. The injury contributed to his lack of power last season, when he hit only nine homers and slugged a career-low .498 in 225 at-bats. This season he got off to a .150 start, with a mere three singles in 20 at-bats.

Braun has explored the option of surgery on his thumb but steadfastly resisted taking the plunge -- in large part because there's no surefire solution to what's bothering him. Now he's tinkering with different combinations of pads and glove to help ease the strain on his hand.

"I've dealt with it for a while," Braun said. "There's ebb and flow, good and bad. More bad than good. As I've said many times, I'm optimistic and hopeful that we'll eventually figure something out that makes a difference. The longer you deal with any injury, the easier it becomes to compensate."

Braun's three homers Tuesday broke a streak of 98 plate appearances without a homer and marked the first time he had gone deep since May 22, 2013, against the Los Angeles Dodgers. With his 212th, 213th and 214th homers as a Brewer, Braun passed Geoff Jenkins and moved into third place on the franchise's career list behind Robin Yount (251) and Prince Fielder (230).

Regardless of how Philadelphia fans treat him, he's an admirer of Citizens Bank Park. Braun has a career .405 batting average (32-for-79) with 10 home runs and 21 RBIs at the Phillies' hitter-friendly yard.

Judging from his performance Tuesday, Phillies fans might want to consider cutting back on the hostility in the final two games of this series.

"I was with the Angels a few years back and we let Jose Guillen go, and there were some negative things to go along with that," Brewers manager Ron Roenicke said. "Every time he came back to town, the fans would boo him. And every time they booed him, he got a huge hit. I was like, 'Leave him alone.'

"Really, it makes a difference. Those guys that can turn it up, you don't want to be messing with. There's no better way to quiet people than to do what he's doing."

Braun isn't entirely sure what to expect the rest of the series. But he certainly didn't anticipate hitting three home runs when he arrived for the first game in Philly and felt "terrible" in batting practice.

"This is kind of a crazy game sometimes," he said. "I didn't think there was any chance I could have possibly had a game like this today. The game works in mysterious ways."