Serena gets warm welcome in return 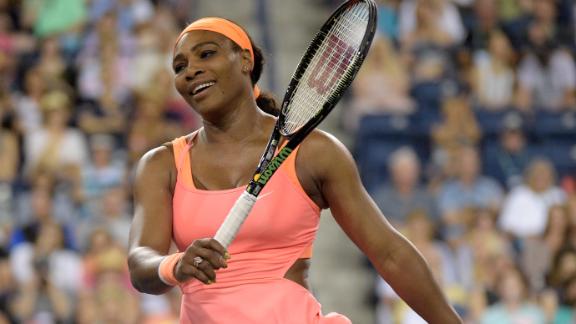 INDIAN WELLS, Calif. -- An error-prone Serena Williams beat Monica Niculescu 7-5, 7-5 in her first match at Indian Wells in 14 years Friday night, receiving a warm welcome from the fans in sharp contrast to the booing that drove her away as a teenager.

Williams rallied from a 5-3 deficit in the first set and recovered after blowing three leads in the second set, winning on her fourth match point in her first tournament since earning her 19th Grand Slam title at the Australian Open in January.

"I feel like the nerves have kind of gone away," she said. "I'm glad I was able to do this. It definitely feels like one of the biggest and one of the proudest moments of my career."

A serious-looking Williams walked onto the court wearing headphones, then slipped them off and raised her right arm to acknowledge the sustained applause as she was introduced.

Williams had 48 unforced errors and 12 aces in a wildly inconsistent performance. She closed out the two-hour match when Niculescu netted a backhand volley. After a quick handshake, Williams waved to the crowd, but there was none of the jumping and pirouetting that often marks her victories.

"I feel like I've already won this tournament. I don't feel like I have to actually hold the trophy at the end of this," Williams said. "I feel like I'm already holding up a trophy. I have never felt that way before. Just being here is a huge win. Not only for me, but for so many people. It's a wonderful feeling."

Niculescu, ranked 68th in the world, was affected by the reception, too.

"I'm happy the crowd was really nice," she said.

The world's top-ranked women's player had stayed away from the BNP Paribas Open since winning the 2001 title as a 19-year-old, getting booed by the fans for what happened a day earlier, when she was to play older sister Venus in a semifinal and Venus withdrew because of injury 20 minutes before the start.

"We love you, Serena!" a male fan bellowed during the coin toss at the net. Billionaire Larry Ellison, who owns the tournament, was on his feet applauding Williams as she jogged to the baseline near his seat for the warm up. He was later joined by John McEnroe and billionaire Bill Gates.

Williams had played just one Fed Cup match since winning in Australia and her rust showed. On her third match point, she netted a backhand return of Niculescu's 79 mph serve. She had two match points on Niculescu's serve in the 10th game, committing unforced errors both times, including a backhand that she had plenty of time to make.

Williams' mother, Oracene, sister, Isha, her coach and agent watched as Williams fell behind 2-0 in the opening set of the second-round match.

Niculescu used her wicked topspin to blunt Williams' power game, taking a 5-3 lead. Williams held at love before winning the last two games to take the first set, in which there were five service breaks. Williams double-faulted away one game before serving out another at love.

"I've never played anyone like her before. She's obviously an unbelievable fighter," Williams said. "She really made me work really hard. It was good to have a really, really tough match."

A small group of fans waited near an entrance gate in the hours beforehand, with one of holding a hand-lettered sign that read "Welcome back Serena."

Williams is 14-1 with two titles to her credit in three previous appearances in the desert.

Williams' match was one of 11 involving Americans, with six advancing and four losing. Wild card Denis Kudla played a late match against Nick Kyrgios of Australia.

Williams' return was welcomed by tournament officials, although the event had hardly stagnated in her absence. It is one of the best attended outside of the four Grand Slam events, with close to 450,000 expected through the gates during the two weeks.

Venus Williams hasn't changed her mind about boycotting Indian Wells. In 2001, her father said he heard racial taunts from the crowd, and there was speculation that he dictated which sister would win their meetings.

Now 33, Serena said it wasn't one thing in particular that brought her back to the tournament that she had vowed she would never play again.