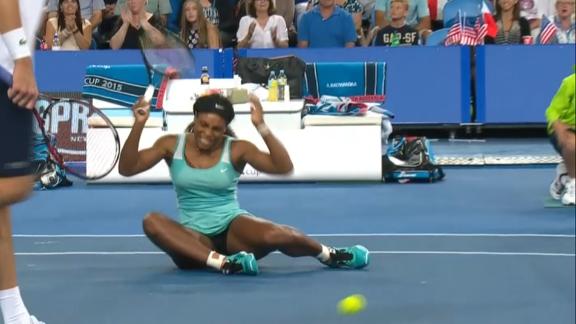 PERTH, Australia -- While her older sister Venus was winning the WTA event in Auckland, New Zealand, Serena Williams was losing two of four singles matches at the Hopman Cup -- and then her cool in the final.

Serena's week started with ordering a coffee court-side after being shut out 6-0 in her opening set of the year by Flavia Pennetta of Italy. The caffeine helped, and she rebounded to win that match in three sets, but lost her next to Canadian Eugenie Bouchard in a very un-Williams score of 6-1, 6-1 in just 50 minutes.

"I don't know what's wrong with me, I'm so tired," Williams said after the Bouchard loss. "I can't get my body to move. I feel like I've got no energy."

She had more energy Saturday in the championship match between the United States and Poland, but Williams still lost to Agnieszka Radwanska for the first time in nine meetings, 6-4, 6-7 (3), 6-1.

John Isner beat Jerzy Janowicz 7-6 (10), 6-4 to keep the Americans in the hunt, and send the final to a deciding mixed doubles.

That's when the fun began.

With the U.S. 2-1 down in the second set, a point had to be replayed after Janowicz prematurely celebrated after he thought Isner and Williams both struck the ball.

Williams believed the Americans should have been awarded the point due to Janowicz's distraction, and a five-minute argument involving all four players, the chair umpire, and a tournament referee ensued.

The Americans ended up winning the replay, but a few games later Williams, who was most vocal during the argument, twice smashed her racket on the court after missing a simple backhand.

"It was one misunderstanding," Radwanska said of the controversy after Poland clinched the title with 7-5, 6-3 mixed doubles victory.

A subdued Williams said she enjoyed the tournament despite failing to come away with the title.

"Thank you John, you really held me up and gave us a chance in the final. Sorry I couldn't help you out," Williams said.

Williams heads to Melbourne Park to train for a week before the start of the Australian Open, where she has won five singles titles among her 18 Grand Slam championships.