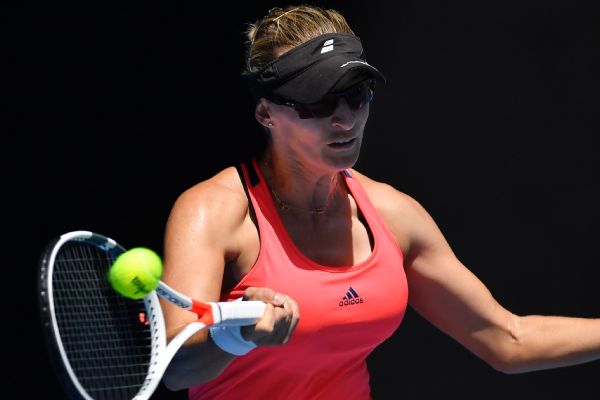 MELBOURNE, Australia -- Serena Williams is still on track for an Open-era record 23rd Grand Slam title after beating ninth-seeded Johanna Konta 6-2, 6-3 in the quarterfinals on Wednesday.

When it was over, Lucic-Baroni crossed herself several times and fell to her knees, tears in her eyes.

"I can't believe I'm in semifinals again," Lucic-Baroni said in her on-court interview. "I feel a little bit in shock right now. I never could dream about being here again."

And then words failed her and she began crying again.

Lucic-Baroni is ranked only No. 79 among WTA players and is nursing a tender left thigh, but she'll continue the good fight in the semifinal against Williams.

Pliskova, who was 9-0 in 2017, surprised Williams in the 2016 US Open semifinals before losing toAngelique Kerber in the final.

Lucic-Baroni was seen as an emerging professional star when she won the 1996 US Open junior title and repeated at the 1997 Australian Open. She was only the third player in Open era history to win two junior Slams by the age of 14, joining Martina Hingis and Jennifer Capriati. At 15, she won her first WTA-level title, the fifth-youngest winner ever.

But Lucic-Baroni didn't play a Grand Slam event from 2003 to '09 due to injuries, personal setbacks and financial issues. If she hadn't been a tennis player, she said she would have been an archaeologist.

Lucic-Baroni enjoyed a resurgence in recent years, reaching the fourth round of the 2014 US Open, but no one was prepared for this.

She had lost eight of nine matches at the Australian Open, but Lucic-Baroni has won all five matches here this year.

"To me, this is overwhelming," she said. "I will never, ever, ever forget this day. This has made everything bad in my life OK."