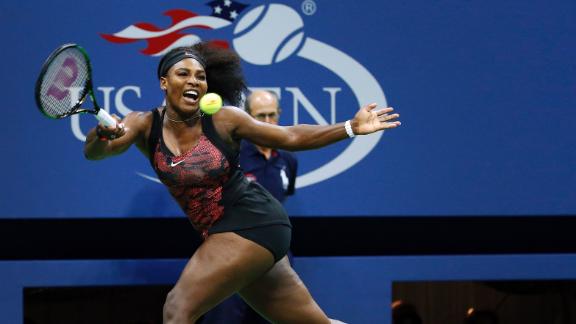 Williams came soaring, roaring back to defeat feisty fellow American Bethanie Mattek-Sands 3-6, 7-5, 6-0. The match required 109 minutes, but it felt a lot longer than that.

"I'm not trying to live on the edge," Williams said in her on-court interview. "I don't think I came out too slow, I just think Bethanie played really well.

"I was finally able to get some rhythm at the end of the second."

According to ESPN Stats & Information, it was the 10th time Williams has won the third set 6-0 after dropping one of the first two sets. Prior to the US Open, she had done so in two Grand Slam events this season -- the French Open semifinals and the Australian Open round of 32.

Williams has won each of her 24 singles matches at the 2015 majors and, going back to last year's US Open, 31 straight overall.

The top seed, Williams is attempting to win all four Grand Slam titles in the same year for the first time since Steffi Graf did it 27 years ago. Only three women ever have done it.

In July, Williams, 33, became the oldest woman to win a Grand Slam singles title, taking her fourth straight major at Wimbledon. Her run of 47 consecutive hard-court wins in the United States is also still in play.

Friday's first set was the 10th set she has dropped in her 24 major matches, and the eighth time she has lost the first.

"I think getting out of it [to win] so many times definitely helps me," Williams said. "It's definitely not something I want to do, though. But, hey, a win's a win, I guess."

This would have been an upset of epic proportions. In two previous matches against Williams, Mattek-Sands, 30, had never won more than three games in a set. She was at the US Open with a wild-card berth after undergoing hip surgery and finishing the 2014 season ranked No. 175. She is currently ranked No. 101 among WTA players.

Few people realize it, but Mattek-Sands came into the match with as many 2015 Grand Slam titles as Serena -- two with doubles partner Lucie Safaraova and a mixed doubles crown with Mike Bryan. She had never been to the third round of the US Open in singles, much less the fourth.

As Williams has progressed through the season, the pressure has built. She has acknowledged it, and in her past two matches the tension she's been feeling has been increasingly evident. Williams had 10 double faults in her second-round victory over Kiki Bertens, including four in one game.

"I mean, of course it's there," Williams said of her quest for the Grand Slam. "I'm not a robot or anything. But at the end of the day I'm just here to do the best I can. If that means I win, then great. But if it doesn't, then you know what? I can't let that affect me because I still have other tournaments to play."

But from the beginning Friday, Williams seemed nervous and focused on trying to contain her emotions. Her shots were hard and flat, leaving her with little margin for error. In the first set, 14 unforced errors underlined that problem; by contrast, Mattek-Sands had only one.

In the second set, Williams started playing better, and her serve began finding the mark. Still, Mattek-Sands managed to hold in consecutive service games after trailing 15-40. In one wild exchange, Serena had not one but two scrambling swipes at a lob offering from Mattek-Sands. After a number of missed opportunities, Williams converted her third set point when Mattek-Sands' lunging backhand sailed long.

Williams dominated the third set, finishing with a flourish; after a massive overhead she flexed an even bigger fist pump and a still-larger smile.

Next up isMadison Keys, who defeated Agnieszka Radwanska 6-3, 6-2 on the Grandstand. Williams beat Keys, 20, in the final of the Australian Open in January.

With a win Sunday, Williams could see sister Venus in Tuesday's quarterfinals.

"I only have one match, the only one I'm looking forward to is the next one," Serena Williams said. "That's all I can do.

"This journey has been great. Every night I come out it feels better and better."