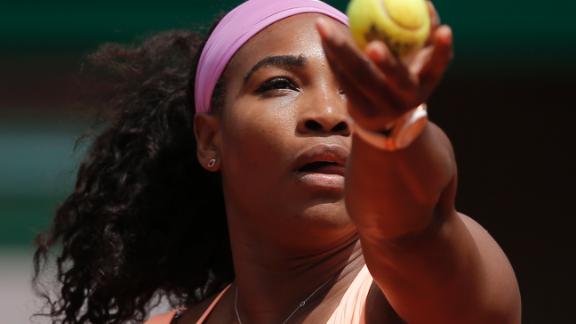 PARIS -- There was no comeback necessary forSerena Williamsthis time, as the top-ranked player cruised into the semifinals of the French Open on Wednesday.

Having lost the first set of her past three matches, Williams made quick work of Sara Errani, a finalist in 2012,with a 6-1, 6-3 victory in the quarterfinals. The No. 1 seed had a 39-9 edge in winners, and the match lasted just 65 minutes.

"I don't want to stress myself out. I'm going to go home and relax," Williams said about reaching the semifinals. "Whatever happens, happens. I'm happy to have gotten this far."

The 19-time Grand Slam championcruised through the first set in 27 minutes, and she broke Errani twice in the second.

Errani fought hard to stay in the match on her final service game and saved three match points before going down. Williams missed an easy smash on the third one but earned another one with a powerful backhand down the line before Errani netted a forehand.

"It was very important for me to take a very good start," said Williams, speaking in French during her on-court interview. "The last four French Opens in a row she's been to the quarterfinals or better, so I knew I had to play very well today."

In her nine matches with Williams, the 17th-seeded Italian has won only two sets but she was confident she could do better this time after leading by a set and a break the last time they met in April in the Fed Cup.

"I tried to do the same, but of course the conditions were different," Errani said. "Today Serena, with these conditions, played much better, much stronger. So it was difficult for me to make the things that I normally want to do.

"The power is of course a big thing. She has a lot of power in the serve. She's serving so strong. And then from the baseline she is hitting so strong, so it's difficult to play."

Williams is 30-1 overall in 2015 and owns a 19-match Grand Slam winning streak, including championships at the US Open last September and Australian Open in January, raising her total to 19 major singles trophies. Only two tennis players have won more: Margaret Court (24) and Steffi Graf (22).

The two-time French Open champ still has a chance to extend her streak of wins in Grand Slam events to three and become only the fifth woman in the Open era -- and the first since Jennifer Capriati in 2001 -- to win the year's first two majors.

For Errani, it was a second straight loss in the quarterfinals at the French, as she fell to 0-10 in her career vs. No. 1 players.

Bacsinszkyused a final backhand winner down the line on Court Suzanne Lenglen to advance to her first semifinal at a Grand Slam tournament.

"It's just incredible," said Bacsinszky, who becomes the first Swiss female player to reach a Grand Slam semifinal since Patty Schnyder at the 2004 Australian Open.

In women's doubles, Lucie Safarovamade yet another semifinal after the Czech player had already advanced that far in singles.

Safarova and American Bethanie Mattek-Sandsteamed up Wednesday fora 7-5, 6-2 victory against the top-seeded pair of Martina Hingis and Sania Mirza.

Safarova is gunning for two trophies, and plays in the singles semis against Ana Ivanovic on Thursday.

Serena cruises in quarters
Serena Williams defeated Sara Errani 6-1, 6-3 to advance to the semifinals at the French Open.