Seven 49ers kneel during anthem prior to game against Redskins 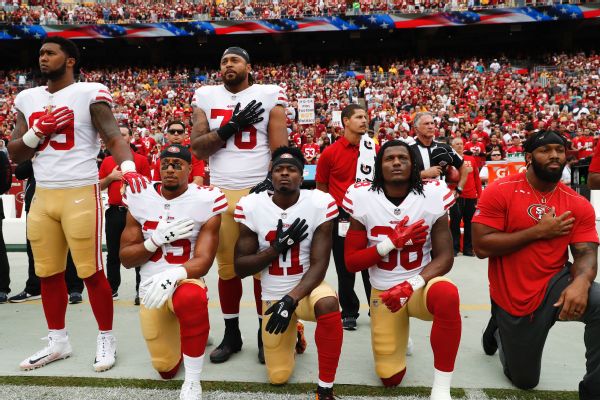 LANDOVER, Md. -- After more than 20 San Francisco 49ersplayers knelt during the national anthem in each of the past two weeks, the team took a different approach before Sunday's game against the Washington Redskins.

According to Reid, however, there was actually miscommunication regarding how the team would proceed. The 49ers, Reid said, considered standing together for the anthem on Sunday for the first time this season.

"It was a miscommunication on my part, something simple," Reid said. "I discussed with the guys maybe the possibility of not kneeling because we're in the nation's capital, just to put to bed the accusations that we're disrespectful to the nation.

"But thinking about it some more, I decided that we just make sure that we keep doing a good job of getting the message [out and] saying that we're not disrespecting anybody. So it was just a miscommunication on my part."

Pence voiced his displeasure on social media after leaving that game, saying on Twitter that he would not dignify any event that disrespects soldiers, the flag or the anthem.

President Donald Trump soon followed up by saying that he asked Pence to leave the stadium if any players knelt.

After the loss to the Colts, Reid said he thought Pence's actions were planned, calling it a "PR stunt."

"He knew our team has had the most players protest," Reid said. "He knew that we were probably going to do it again. This is what systemic oppression looks like. A man with power comes to the game, tweets a couple things out and leaves the game in an attempt to thwart our efforts. Based on the information I have, that's the assumption I made."

On Monday, reports surfaced that the NFL owners were considering adding a rule that would force players to stand for the anthem, though commissioner Roger Goodell indicated that wasn't the case later in the week.

The NFL and NFL Players Association released a joint statement on Wednesday, saying that representatives from the players' union will be at the owners meetings in New York this week to discuss the controversy surrounding the national anthem and the protests taking place during it.

Goodell later told NFL Network that the plan is to have in-depth discussions with the players and owners so they can understand the issues the players are trying to address and how to address those issues in communities all over the country.

Reid said after Sunday's loss to Washington that he is one of the players who will be taking part in the meetings in New York, along with Anquan Boldin, Malcolm Jenkins and others. Reid stayed on the east coast Sunday night so he could travel to New York while the Niners flew back to the Bay Area.

Reid, of course, was the first player to join former 49ers quarterback Colin Kaepernick in kneeling during the anthem in 2016 as a protest of racial inequality and police brutality.

On Wednesday, Reid said he has had discussions with team CEO Jed York in which he received assurances he would have the organization's support.

"Well, I've talked to Jed, and he's expressed very clearly that he wants to support us, that he's not going to force us to do anything," Reid said. "So, speaking for our team, that's what he's told me explicitly."
Report a correction or typo
Related topics:
sportsespnnational anthemsan francisco 49ersdekoda watsonmarquise goodwinnfleric reideli haroldadrian colbertarik armstead
Copyright © 2020 ESPN Internet Ventures. All rights reserved.
More Videos
From CNN Newsource affiliates
TOP STORIES