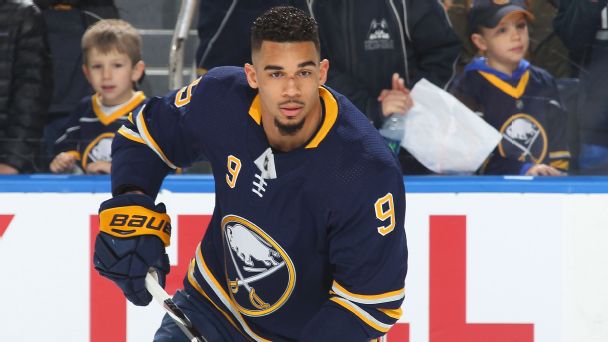 Greg Wyshynski, senior writer: I'm a sci-fi geek, and part of being one is the suspension of disbelief. If you're stressing about explosions that make sound in space, you're probably not going to enjoy "The Last Jedi."

Yet I can't apply the same lack of logic to this exercise. My heart says to put Evander Kane on the St. Louis Bluesand watch grown men weep at the beauty that would be a Kane-Paul Stastny-Vladimir Tarasenkoline. But I can't, in good faith, make that my answer when St. Louis has neither the first-rounder it might take to get Kane nor the cap space to make this work.

There is, however, a team in the Western Conference with a first-round pick, enough prorated cap space and a need for an elite scoring winger: the San Jose Sharks.

Kane could play with Joe Pavelski, which would allow the Sharks to push Tomas Hertl down to play with Logan Couture, which would push Joonas Donskoi down to play with Chris Tierney. These are all good things. If Joe Thornton somehow makes it back from injury before the playoffs, the idea of Jumbo feathering passes to Kane is rather tantalizing too.

Kane has 18 goals and 20 assists in 57 games, with only eight of those 38 points coming on the power play. (He has three short-handed goals.) In a Western Conference that looks as if it could be an arms race for scoring talent, adding Kane would go a long way toward keeping the Sharks in a playoff spot -- and given their cap situation next season, there's always the potential for keeping him long term as well.

So that's the case for Kane with the Sharks. Now, watch the Blues land him. It's the trade deadline. Logic has no home here.

Emily Kaplan, national NHL reporter: We know the Nashville Predators are poised to make a splash at the deadline. We know all the other teams are hoping that luringMike Fisher out of retirement was David Poile's big move, but the Predators GM probably wants to add even more top-six scoring, especially on the wing. We know this is a team that's not risk-averse. We know Nashville is in on the Rick Nash sweepstakes.

I know if they don't get Nash, Evander Kane would be one heck of a consolation prize.

For two months, we've been told that the Sabres' asking price for Kane was enormous: reportedly a first-round pick, a prospect, a roster player and a conditional pick. That should sound high for anyone -- hey, lean in Buffalo! -- but especially to Nashville, which has already given up significant assets in the megadeal that landedKyle Turris. The Predators' top prospect, Dante Fabbro, is probably off the table, once again, especially if we're only talking about a rental. But Nashville still has all of its 2018 draft picks, minus the second-rounder, and all of its 2019 picks. If Poile can work out a fair price -- remember, he has an embarrassment of depth at the center position, an overinflated asset in this center-barren market -- Kane's presence in the lineup could move the Predators from contenders to a downright scary team to face in the playoffs.

The Predators are (rightfully so) going all-in this season and, as Greg notes, the West could turn into an arms race for scoring. Nashville has been fantastic in so many areas of its game but could use help in 5-on-5 scoring (18th in the league). Kane would certainly thrive in the Western Conference, where more of a premium is placed on physicality. He'd provide insurance for injury, which the Predators have certainly had their share of, plus he would be a matchup nightmare on the third line (in terms of talent, he's certainly top six).

I have no idea where Kane will actually end up, but I know if I'm another team in the West, I'm hoping it's not Nashville.

Sean Allen, NHL Fantasy writer:Speaking strictly from a fantasy perspective, as I am wont to do, the formula for a preferred destination for Kane is quite simple: role on the top line (with an established duo) and a spot on the first power-play unit.

Those two criteria would basically make Kane a lock for top-50 fantasy value for the remainder of the season. He flashed those chops early in this campaign before he slowly fizzled down the depth chart with the Sabres.

The top destination for fantasy purposes would be the Los Angeles Kings. The most frequently used duo on the Kings' top line this season has been Anze Kopitar and Dustin Brown. The majority of the time, Alex Iafallo has been given the third spot on the line, but Tanner Pearson and Tyler Toffoli have also had their chances. None have settled in and created a must-have trio for the Kings going forward. In a perfect world, Kane could step in and play off the space and chances created by Kopitar and Brown -- andJeff Carter would return and reestablish his chemistry with Pearson and Toffoli on the second line.

The Kings are really the only destination, from a fantasy perspective, that would be a turnkey situation for Kane. Other possibilities that come close to meeting the criteria would require an undeserved demotion for another winger. That's not to say the Calgary Flames wouldn't slide Micheal Ferland down the depth chart, or the Washington Capitals wouldn't bump T.J. Oshie off the power play, but in the fantasy realm, we prefer these moves to lift all boats. If Kane landed with the Kings, no current fantasy asset would be negatively impacted. Other destinations that come close to meeting the needs would be the Blues or New York Islanders, but again, some tough lineup choices would need to be made regardingAlexander Steen or Anthony Beauvillier.

The upside for Kane still exists if there isn't a top power-play unit role awaiting him at his next destination, but it wouldn't be as high. If he lands with, say, the Pittsburgh Penguins or Boston Bruins, he could pile on a ton of goals at even strength between now and April. But in both of those scenarios, he probably wouldn't be a part of the top power-play unit.
Report a correction or typo
Related topics:
sportsespntrade deadlinenhlbuffalo sabresnashville predatorstradessan jose sharksevander kanelos angeles kings
Copyright © 2022 ESPN Internet Ventures. All rights reserved.
TOP STORIES
EXCLUSIVE: Mom reacts to murder charge in daughter's overdose
2 cases of omicron sub-variant BA.2 detected in Santa Clara Co.
7-year-old SF girl and mom pray for miracle to avoid eviction
Bay Area Frenchie reunited with owner after gunpoint robbery
SJ becomes 1st in US to require gun liability insurance
Man denied heart transplant because he has not received COVID vaccine
Wealthy Bay Area city pushes back against new housing proposal
Show More
Apple CEO allegedly stalked by woman who showed up at house
Surging food prices starting to lose steam
San Mateo Co. officials vow PPE debacle will never happen again
How to get free N95 masks from pharmacies, community health centers
Bay to LA rivalry: Bragging rights at stake in NFC title game
More TOP STORIES News