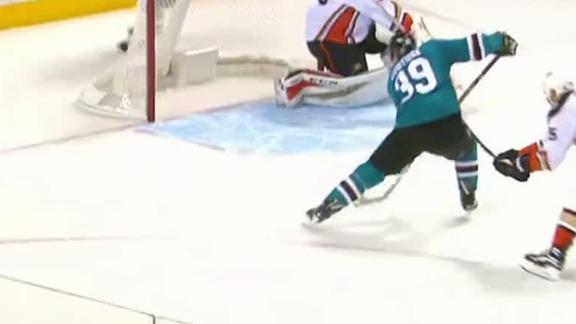 SAN JOSE, Calif. -- For three games, the San Jose Sharks have had more speed, discipline and depth than the Anaheim Ducks.

If they can repeat that formula for one more game, the Sharks will move onto the second round of the playoffs.

Joonas Donskoi scored one goal and set up another to start a four-goal barrage in the second period and the Sharks raced past Anaheim for the third straight game, beating the Ducks 8-1 on Monday night for a 3-0 series lead.

"We understand there's a lot of work to do," captain Joe Pavelski said. "Eliminating teams is always tough. That's kind of where our mindset shifts, I think. We'll see a few things that we can do better, and a few things we're doing well. That commitment from us is going to go a long way to stay with what we're doing."

Right now just about everything is working for the Sharks, who had eight goal-scorers in the highest-scoring playoff game in franchise history and got a 45-savve performance from Martin Jones.

San Jose used its superior speed to create odd-man rushes that paid off when Donskoi scored and then set up Marcus Sorensen in the opening four minutes of the second period and then turned the game into a laugher with four power-play goals after the Ducks spent most of their energy slashing and cross-checking.

"They can take as many of those as they want to, we'll take the power plays," coach Peter DeBoer said. "They take penalties, that's a fact. During the season they do and we anticipated that it would be like that in the playoffs and it has been. It's on us to make them pay for making those plays and decisions, and we have.

Eric Fehr and Tomas Hertl added goals later in the second to turn this all-California series into a rout. Logan Couture had a goal and two assists, Pavelski, Evander Kane and Timo Meier scored power-play goals in the third period, for the Sharks, who have outscored the Ducks 14-3 through the first three games of the first-round series.

San Jose will look to complete the sweep in Game 4 at home Wednesday night. Only four NHL teams have lost a best-of-seven series after winning the first three games with the Sharks the last to do it in 2014 in the first round against Los Angeles.

Rickard Rakell scored a power-play goal but the Ducks once again looked a step slow against the speedier Sharks. Anaheim has scored three goals all series, including just one at even strength.

"From my perspective it's hard to forget what we just did. Very undisciplined, very disappointed in our reaction in the hockey game," Ducks coach Randy Carlyle said. "Those are the things we have to address. We're not going to get yourself any kind of opportunity to take the number of penalties we took, and I call them selfish penalties."

The game turned early in the second after Brandon Montour fell near center ice, giving the Sharks a two on one. Donskoi converted on a give-and-go with Evander Kane and San Jose was off to the races.

Donskoi then set up the next goal on another odd-man rush when he fed Sorensen, who faked a forehand and then beat Gibson with a backhand on a similar move that led to goals for Kane and Couture in the first two games.

Jones then made a big stop on Rakell from the slot to preserve the two-goal lead and Fehr helped put the game away when he skated through two defenders and beat Gibson up high to make it 4-1.

Then the Ducks started their parade to the penalty box and the Sharks capitalized.

Fresh off the two wins in Anaheim, the Sharks were greeted by a frenzied crowd that sparked them to a fast start. Mikkel Boedker got things started when he used his speed to get around Hampus Lindholm and feed an open Couture in the slot for the tap-in into the open net.

Anaheim answered when Rakell got his first point of the series when he scored on a one-timer on the power play.

Game notes
D Andy Welinski was back in the lineup for the Ducks after being scratched in Game 2 for Kevin Bieksa. ... F Jason Chimera got his first action of the series for Anaheim in place of Antoine Vermette. ... Sharks C Joe Thornton, who has been out since Jan. 23 with a knee injury, took part in pregame warmups once again but isn't ready to play.