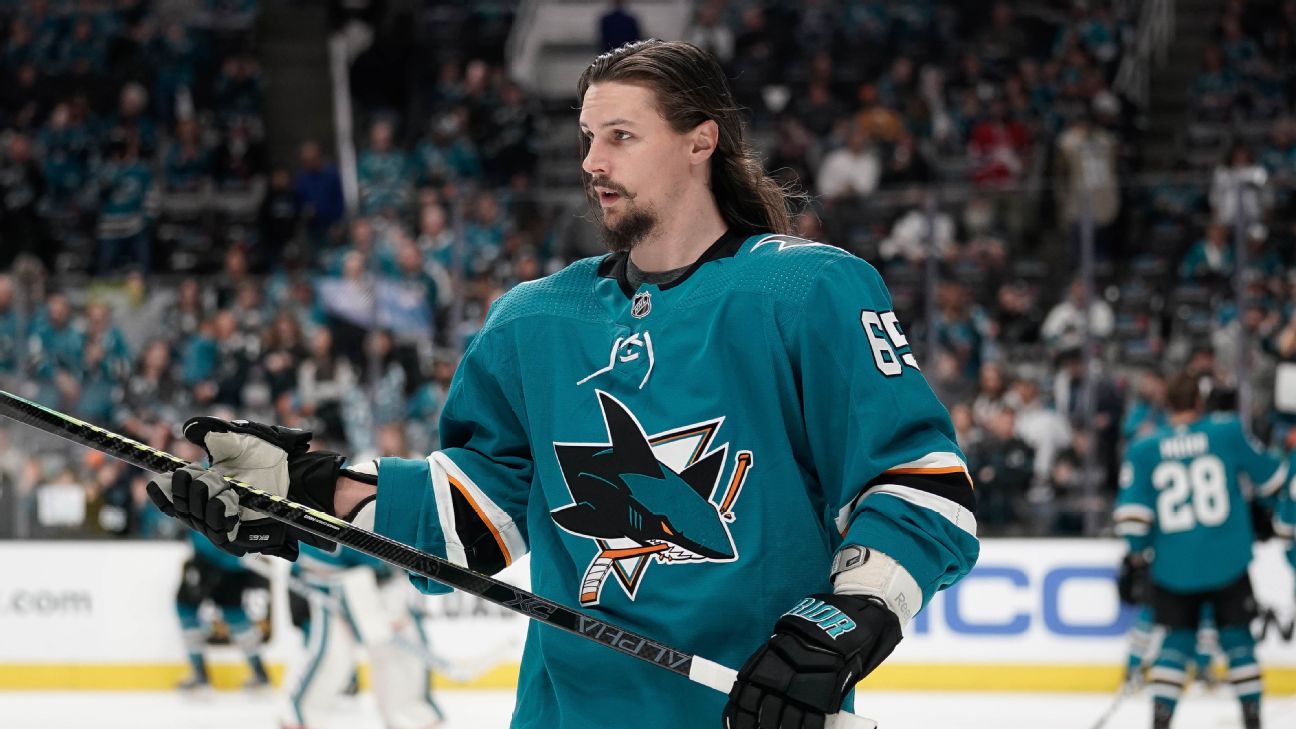 Karlsson and Hertl didn't travel with the team on Monday and did not have nameplates in the Sharks' dressing room. Pavelskiwas officially ruled out just minutes before game time, after not taking part in the morning skate. All three players failed to finish the Sharks' Game 5 loss to the Bluesat home on Sunday, with Hertl and Karlsson missing the entire third period.

"All three of those guys are important guys," coach Peter DeBoer said. "If we had them? Great. If we don't, then it's next man up and we have to find a way get the job done."

Hertl (10 goals, 5 assists in 19 games) and Pavelski (4 goals, 5 assists in 13 games) were both injured in Game 5 on hits from the Blues. Hertl was hit high by forward Ivan Barbashev in the first period on a play that DeBoer argued should have been a major penalty. Nothing was called on the ice, and the NHL Department of Player Safety felt the amount of head contact and the force of the hit did not warrant supplemental discipline to Barbashev.

Pavelski was hit by Blues defenseman Alex Pietrangelo against the boards, with his head hitting the glass behind him. Pavelski previously missed six playoff games in the second round after a concussion in Game 7 against the Vegas Golden Knights.

DeBoer indicated that the nature of Pavelski's injury made him a game-time decision.

Karlsson's injury has been more systemic. One of the best skating defensemen in the NHL, his mobility has been hampered by what's been speculated to be a groin injury. His status for Game 5 was in question after he missed eight minutes of the third period of Game 4. He tried to go, and ended up being a liability on the Blues' first and third goals. After playing 7:29 in the first period, Karlsson played just 3:03 in the second period and did not return for the third.

"Hindsight is 20/20, you know? We make those decisions based on the reports we get from the player and the medical [staff]," DeBoer said after the game. "The report was that he felt he could play and get through the game. It's easy to sit here and say now, 'Yeah, sure you have regrets.'"

Defenseman Tim Heed will draw in for Karlsson, while Dylan Gambrell will join the lineup for Hertl.

The Blues couldn't help but monitor what was happening with the Sharks ahead of Game 6. Some players were asking reporters what they had heard about who was or wasn't on the team flight to St. Louis.

"Seeing last game, seeing a bunch of guys leaving ... it's something we're aware of, but the focus personally is on my game and as a group what we need to do," O'Reilly said. "We can't be looking at them and what they're going to bring."

For the Sharks, it's a challenge on top of the challenge that they're already facing: avoiding elimination and forcing a Game 7 back in San Jose.

Forward Logan Couture said that whichever pieces are missing, the mission remains the same. "It doesn't change my mindset personally. There's a lot of guys in this room that are counted on to help our team win but you can't win a hockey game without a full team," said Couture, whose team has generated just one goal in the past two games. "Guys that are going to go into the lineup are going to be counted on to contribute. Guys that have been paying the whole way are also going to be counted on.

"With guys out that contribute offensively for us, our line has got to score some goals and help us. That's what we're going to try and do."

The rallying cry was twofold in the Sharks' dressing room. Belief that they're deep enough to sustain these injury losses and their experiences this postseason -- including a rally to defeat Vegas in the first round -- give them hope in Game 6.

"It's tough, but every guy here has a purpose," forward Kevin Labanc said. "We have so much depth on this team that it's not a big deal for us. Just another guy steps up to the plate and does his job. We've been in this situation before. Even worse situations.

"The Vegas series was a big one for us. We were down 3-1 in the series and 3-0 in Game 7. The way we battled back shows the type of team we are. We know what we have to do. We did it already."
Report a correction or typo
Related topics:
sportsespnerik karlssonnhljoe pavelskitomas hertlsan jose sharks
Copyright © 2022 ESPN Internet Ventures. All rights reserved.
TOP STORIES
Biden to hold press conference today to mark first year in office
Some Bay Area residents encounter problems ordering COVID tests
Experts warn don't 'let guard down' as COVID cases decline
Victim of deadly NYC subway attack remembered in SF
SF's Castro Theatre to be transformed into live music venue
French actor Gaspard Ulliel dies after ski accident
Airlines worldwide rush to change flights over US 5G problems
Show More
CHP recovers $185,000 worth of stolen merchandise
Website for free COVID tests is here. How does it work?
Criminals smash 6 SJ storefronts in 90-min spree, police say
2 dead after San Jose collision involving 3 pedestrians: SJPD
400M N95 masks available to the public for free starting next week
More TOP STORIES News