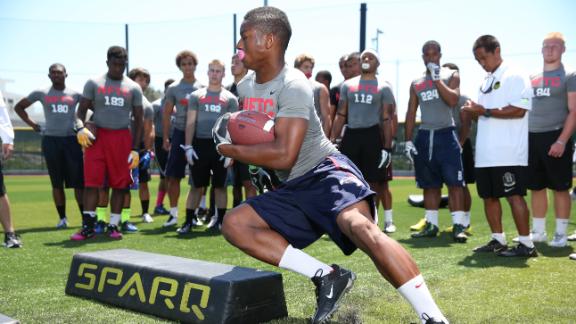 Oklahoma freshman running back Joe Mixon has been suspended from all activities with the football team for the entire season, the university announced Monday.

Mixon was charged Friday with misdemeanor assault stemming from an alleged incident in which he was accused of punching a woman in the face.

"As the university has demonstrated in the past, we are committed to winning the right way," athletic director Joe Castiglione and coach Bob Stoops said in a joint statement. "As an example to others, OU sets the highest possible standards for its student-athletes, coaches and staff."

The Sooners are ranked No. 4 in the AP's Top 25 preseason poll and No. 3 in the USA Today Coaches Poll.

Mixon will be allowed to take classes and remain eligible for financial aid if he meets certain conditions.

According to the Cleveland County district attorney's office, Mixon could face up to one year in jail if convicted on the charge of an act resulting in gross injury.

The alleged incident occurred at Pickleman's Gourmet Cafe on July 25. According to the incident report, Amelia Rae Molitor, a 20-year-old Oklahoma student from Euless, Texas, told police that Mixon punched her, breaking four bones in her face.

Mixon's attorney said his client had done nothing wrong and was protecting himself "from a very intoxicated and troubled young woman."

The district attorney declined Friday to file charges against Molitor after the Norman police department submitted the findings of its investigation.

Mixon was the top signee in Oklahoma's most recent recruiting class. The Oakley, California, native was rated the No. 6 running back recruit in the country.

Mixon Suspended By Sooners
Jake Trotter discusses the season-long suspension of RB Joe Mixon by the Oklahoma Sooners, and what it means for his future with the team.

Drive Through: Joe Mixon Latest
A look at what's next for suspended Oklahoma running back Joe Mixon, and whether or not Oklahoma is being consistent with player who have off-field issues.