Buckner already has agreed to a new contract with Indianapolis that will pay him $21 million per year, the source said. That will make him the second-highest-paid defensive tackle in the NFL, behind Aaron Donald of the Los Angeles Rams.

Trading the 13th pick takes away the option of selecting a quarterback in the first round for the Colts. They could still select one in the later rounds, sign a free agent at the position or keep Jacoby Brissett as their starter next season.

The Colts have interest in former Los Angeles Chargers quarterback Philip Rivers, according to a source.

Acquiring Buckner, who turns 26 on Tuesday, falls in line with general manager Chris Ballard's focus on the defensive line, since the Colts already having one of the top offensive lines in the NFL.

"I'm always going to be obsessed with the [defensive] front," Ballard said last month during the NFL combine. "I just believe that that's how you win and that's how you have sustained success over time."

The Colts are the first team in NFL history to allow teams to complete at least 70 percent of their pass attempts in two straight seasons, according to ESPN Stats & Information.

Buckner will join a Colts defense that features veteran pass-rusher Justin Houston, who led the Colts with 11 sacks last season, and Pro Bowl linebacker Darius Leonard, who led the league in tackles as a rookie in 2018. Leonard has 284 tackles, 12 sacks and 7 interceptions in just two seasons in the league.

Buckner had been a stalwart for the Niners since they used the No. 7 pick to select him in the 2016 NFL draft. He missed just one game in his four seasons in San Francisco, playing the third-most snaps among defensive lineman in the past four seasons and recording 28.5 regular-season sacks.

In February, he was named the team's winner of the Bill Walsh Award, which is given to the Niners player who "best represented the standard of professional excellence." Buckner thanked the franchise in an Instagram post.

The decision to trade Buckner came on the same day the 49ers signed fellow defensive lineman Arik Armstead to a five-year deal worth up to $85 million.

It also came as a big surprise in the Bay Area, where Buckner has been the steadier, more productive player than Armstead over the past four years. But with tight end George Kittle also due for a lucrative contract extension soon and big investments already on the defensive line -- Armstead and ends Nick Bosa and Dee Ford--the 49ers likely recognized that Buckner would bring the most value back in a trade and would command a contract beyond what they were willing to spend.

General manager John Lynch has maintained all offseason that some serious "trade-offs" could be necessary in order to build the team for next season. In trading Buckner and landing the Colts' first-round pick, the defending NFC champions now have two selections in the top round (Nos. 13 and 31).

With no picks until the fifth round after the 31st selection, it's likely the Niners will look to use at least one of those first-round choices to move back and acquire more picks in the middle rounds. 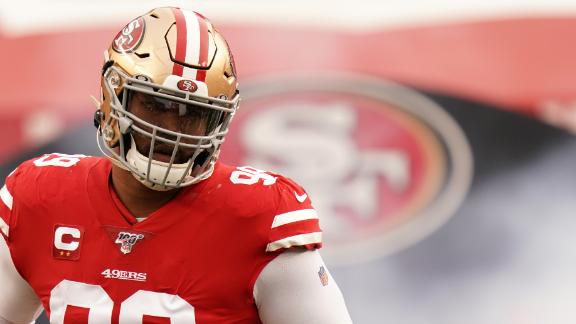