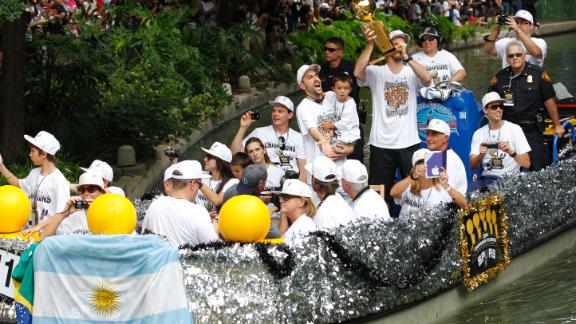 SAN ANTONIO -- Fans screamed "Go Spurs Go!" in unison at the slightest glimpse of a San Antonio Spurs player or coach floating down the River Walk.

It was reminiscent of last season when the Spurs walked off their team charter to those chants, except the tone Wednesday night was much sweeter.

"It is soaking in, but I'm still going to live it up for about the whole summer," NBA Finals MVP Kawhi Leonard said. "(I haven't slept) very much. I've been trying to live the moment. It's been hard to sleep still. Thought I would get some sleep after we won the Finals, but I'm still celebrating. Go Spurs Go! San Antonio!"

After falling 25 seconds shy of capturing the title last season only to fall in seven games to the Miami Heat, the Spurs made another run to the NBA Finals. Except this time, they closed out the Heat in five games for the team's first title since 2007.

"I cried (last year). I think the rest of the city cried, too," Spurs fan Rosalinda Gonzalez said. "How they lost, that was bad. It made this year's victory even more sweet, sweet. (And) the way we did it. All the games that we won were by a billion points. It was awesome. Great comeback."

Given a chance to celebrate what they couldn't last year, Spurs fans endured 90-degree heat to line the River Walk and stand outside of the Alamodome up to five hours before the festivities began. The City of San Antonio estimated about 100,000 people attended the River Walk parade and 75,000 were at the Alamodome.

"We've got to thank the people of San Antonio," said Spurs guard Patty Mills, who served as the event's master of ceremonies. "You really make this way more special than it already is. You guys are so genuine and really care about us. You've embraced all of us as a family."

And the fans soaked up the moment as if it was the city's first championship.

Even usually cantankerous Spurs coach Gregg Popovich fully embraced the moment, smiling and waving at the crowd as the barge he rode on floated along the River Walk. Popovich raised one finger with a puzzled look before counting off two, three, four and nodding his head when he reached five, raising an outstretched hand to symbolize how many titles the franchise has won.

It was Popovich who admitted the Spurs were "hurting" after losing last season's Finals. Still, the team was greeted by thousands of cheering fans upon its arrival home following the Game 7 loss to the Heat.

"I'll be honest with you, when you saw the crowd the first feeling I had was embarrassment," Popovich said last year. "Was just embarrassed that we didn't get it done and then as you look at them all and they just keep cheering you realize, my gosh, you really felt the love and the way they care for these guys and their team and then it did make it easier."

It also was Popovich who implored the team to face the defeat head on and learn from it, and the Spurs certainly did that.

The Spurs' Big Three of Tim Duncan, Tony Parker and Manu Ginobili guided the team to the league's best regular-season record and to a dominant postseason run after escaping a seven-game series with the Dallas Mavericks.

"We owe it all to Pop," Ginobili said as his barge made a stop. "He had us playing great basketball at the right time."

The Big Three twice received standing ovations from the capacity crowd inside the Alamodome as Duncan celebrated his fifth title and Parker and Ginobili their fourth.

Aside from the Big Three, the loudest ovations were for Leonard, who Popovich has called the future face of the Spurs since his arrival via a draft day trade with the Indiana Pacers in 2011.

On the Alamodome stage, Mills shared a story of how he asked Leonard which superhero he was going to be for Parker's annual Halloween party. The quiet 22-year-old responded with, "Kawhi Leonard superhero."

And Leonard was that in the Finals.

Leonard had 22 points and 10 rebounds in the series-ending victory Sunday night, becoming the youngest Finals MVP since Duncan received the honor at the same age in 1999.

The Spurs face an uncertain offseason with up to six possible free agents, but that wasn't even a consideration for the players or the fans Wednesday. After waiting a year, they all got to exhale and celebrate another title.