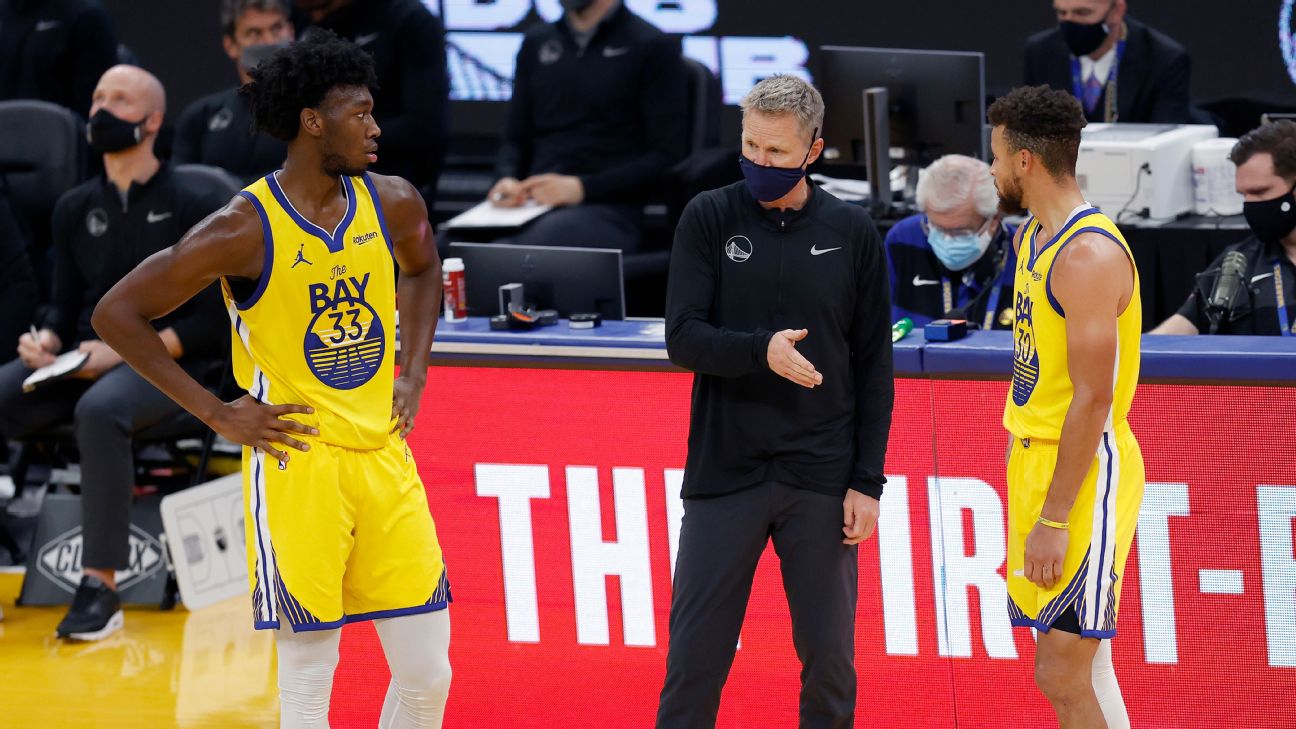 SAN FRANCISCO -- The Golden State Warriors remain confident that center James Wiseman will find his rhythm during the final stretch of the regular season despite an up-and-down rookie campaign, but head coach Steve Kerr says the team can't "force the issue."

The No. 2 overall pick in the 2020 draft is averaging 11.4 points and 5.8 rebounds per game, but has struggled to find the consistency the organization was hoping to see as the season rolled along.


Kerr believes the 20-year-old big man will find his way in the near future, but offered an honest assessment Monday on how Wiseman's minutes will be doled out during the final 22 games of the season.

"I think it's important not to automatically assume that minutes equal development," Kerr said after practice. "I think development also includes observation from the sidelines, earning time, earning minutes. If there are mistakes made in the previous game, let's work on those mistakes. And if we correct those then we get more playing time; if we don't correct them then we get less playing time. So it can't just be throw him out there and let him go for 30 minutes because frankly he's not ready for that.

The fluctuation in Wiseman's minutes and lack of development have been a constant source of intrigue within a frustrated Warriors fan base that has watched the team lose seven of its past eight games to sit four games under .500 heading into Tuesday's game against the Milwaukee Bucks. Wiseman, who missed most of training camp because of COVID protocols, started the season in the starting lineup but was replaced by veteran Kevon Looney on Jan. 25. At the time, Kerr was hopeful that the change would steady the Warriors' defense and said it was "not a demotion."

Wiseman initially responded well in the bench role, but he suffered a wrist injury in a Jan. 30 win over the Detroit Pistons that caused him to miss close to a month. Kerr inserted Wiseman back into the starting lineup on March 4 against the Phoenix Suns, a night after playing the rookie just 11 minutes in a loss to the Portland Trail Blazers.

Wiseman then missed two straight days of COVID-19 testing during the All-Star break, which frustrated Kerr and got the young center benched for the first three quarters of a March 11 loss to the LA Clippers.

Wiseman has shown flashes of promise throughout the season, but Kerr acknowledged Monday that what's keeping him from more minutes are his repeated errors on the defensive end.


"I would say so," Kerr said. "He's been pretty good offensively for the most part. I thought the Toronto game was more an outlier. No Steph, no Draymond and for whatever reason we got completely destroyed, and I don't think that game made any of us look good, myself included. So if you take that game out and you just look game to game you can see James -- he'll have his moments offensively where you can really see it.

"Defensively, is really the key though, there's just so much to learn. So much ground to cover. Transition defense in particular, he's got to improve upon, all these things, they're just going to have to come gradually because it's just too much for a young guy to absorb it all in one span of a few months. But he's coming along, and as I've said many times, he's just a great kid and very coachable and I'm really excited about his future."

Kerr and several Warriors teammates have repeatedly stood behind Wiseman publicly, with Kerr pushing back at times on the notion that Wiseman was struggling with his confidence. Over the past week, though, Kerr admitted that the Warriors were trying to simplify the game plan for Wiseman to help build his confidence back up. But in his first three games this month, Wiseman is averaging just 7 points and 4.7 rebounds in 22.7 minutes.

While it appears Wiseman has regressed since the beginning of the season, the rookie said he can see the improvements in his game.

"I'd say being more aggressive," Wiseman said, when asked what aspects of his game he's better at since the beginning of the season. "I'd say rolling to the basket faster. I'm still working on my rebounding, but that's getting better. And this will come by me being more aggressive on the rebounding side. But I'd say really running the floor, talking, talking on defense and playing better defense. Actually better than my previous games, like I'm playing way better."

Wiseman, who also noted that the game is slowing down for him and he feels more "poised" on the floor, brushed off the criticism that has surrounded his first season on social media and beyond.

"It's really funny to me because I really don't look at none of the negativity and stuff like that," Wiseman said. "Because I look at the bigger picture of things. Like I know that if I keep working then I will be a great player. So I got to just keep working, just keep getting better each day.


"Mind you, I didn't play in college, I only played like three games and I'm still trying to figure stuff out so I'm still behind the eight ball, but I'm most definitely getting better, exponentially each day. So I just feel the growth like every day, so I'm just getting better tremendously and just staying focused and just staying intact with everything. And just asking questions and doing what I can to get better."

Interestingly, Wiseman said that Brooklyn Nets star Kyrie Irving gave him some solid advice in regard to the effort needed to succeed on the NBA level. Wiseman also pointed out that he speaks to another Nets star, former Warriors forwardKevin Durant, on a regular basis -- thanks to a friendship that began when Wiseman was in high school.

"I talk to KD every day," Wiseman said. "We talk about the system, like how he was able to fit into the system here. He just gave me like a lot of advice."

As Wiseman continues to put his professional game together, he does so with the pressure to help carry an organization that hasn't been the same since Durant left the Bay in the summer of 2019. As Kerr has pointed out many times throughout the season and did so again on Monday, the Warriors are caught between trying to develop young players and trying to win games for a proud group that is still hopeful of making the playoffs behind the play of veterans Stephen Curry and Draymond Green.

As the Warriors wait to find out what kind of player Wiseman will ultimately become, Kerr offered another straightforward assessment while describing Wiseman's first professional season.