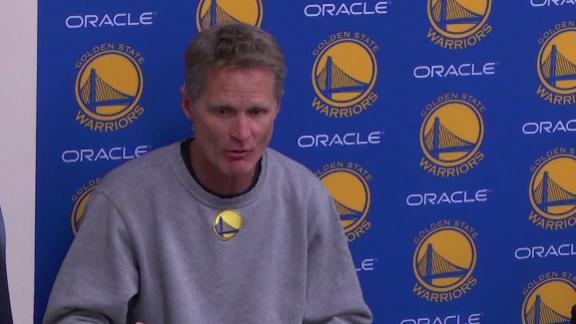 ESPN
By Ramona Shelburne
Warriors coach Steve Kerr was at the Oracle Arena on Sunday to see Golden State's 113-111 victory over the San Antonio Spurs in Game 1 of the Western Conference finals.

This was the first game Kerr attended since taking an indefinite leave of absence in the middle of the first round because of complications from back surgery almost two years ago.

Kerr watched the game from the Warriors' locker room and he delivered a motivational halftime speech to his team, who was facing a 20-point deficit after two quarters.

After the game,Stephen Curryacknowledged the importance of Kerr's presence and the value of his message at halftime.

"Anytime we hear his voice, feel his presence, it means a lot," Curry said to ESPN's Steve Levy. "He's a part of our group obviously. He's the leader of this thing. When we see him it gives us a little bit of juice. It was nice to hear his voice."

Kerr attended his first full practice Saturday since taking that leave of absence; however, the Warriors maintain there is still no timetable for his return.

Kerr had been at Duke University Medical Center receiving treatment for his symptoms, which include headaches, nausea and blurred vision, during the Warriors' second-round series against the Jazz.

"He's gone through hell," Popovich said. "I'm sure most people don't really know, and I'll leave that to him to describe as much as he wants to describe. It's been very difficult for him, and he's shown a lot of courage getting through what he's gotten through."