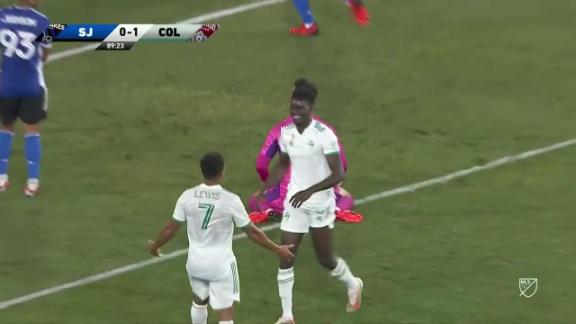 Late-game substitute Dominique Badji's 89th-minute goal gave the Colorado Rapids a 1-0 win over the host San Jose Earthquakes, in a Major League Soccer match without many good scoring chances for either team.

Colorado (12-4-5, 41 points) took the three points from the win and moved into second place at the top of the tightly-packed Western Conference. The Rapids are undefeated in their last seven matches, with five wins, and won without midfielders Mark-Anthony Kaye (Canada) and Kellyn Acosta (U.S.), both with their respective national teams for World Cup qualifiers.

Colorado leapfrogged Sporting Kansas City, which lost on Friday night, into second place. Badji's goal came about a minute after he entered the game.

San Jose (6-8-8, 26 points) remains out of the playoff picture for the moment, and its 10-game unbeaten streak came to a halt.

Cade Cowell, forced to enter the game in the 6th minute after an early head injury to forward Jeremy Ebobisse, had a quality chance in the 40th minute. But his right-footed attempt missed left.


In the 59th minute, Colorado's Cole Bassett hit the post for Rapids, their best chance of the game.

Nicolas Mezquida tried a bicycle kick in the 79th minute, but it was blocked before it got to the net. Earthquakes defender Nathan was a difference-maker in the back for the home side.

After Badji's goal, on which Mezquida assisted, San Jose had a chance to draw even in stoppage time. But Paul Marie's on-target header off a cross was saved by the Rapids' William Yarbrough.

The Rapids had five shots on goal to two for San Jose. Colorado had won just one of its last 18 games away against San Jose in MLS play, including eight draws, going back as far as 2004.