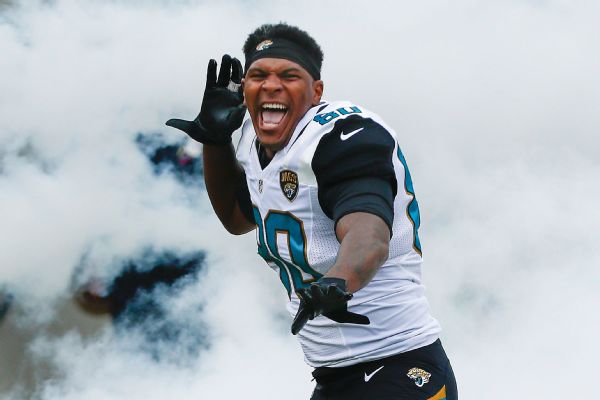 If both players pass physicals and neither team reconsiders, the deals will be officially announced on or shortly after March 9 at 4 p.m. ET, the start of the new NFL year.

Thomas also will restructure his contract upon completion of the trade. He is expected to be in Miami on Tuesday to meet with the Dolphins.

Both teams were in heavy trade talks throughout the past week. The initial scenario, according to sources, was to swap Albert for Thomas. Albert was in Jacksonville on Monday to take a physical and will meet with the Jaguars sometime this week.

With the acquisition of Thomas, Miami has filled a major need at tight end. Former starters Jordan Cameron and Dion Sims suffered through injuries and inconsistency, and both will be unrestricted free agents in March.

Thomas also is familiar with Dolphins coach Adam Gase's system as both were with the Denver Broncos. Thomas recorded 108 receptions for 1,277 yards and 24 touchdowns during a two-year stretch with Gase as Denver's offensive coordinator in 2013-14.

Albert, 32, is a quality left tackle when healthy, but he has missed 13 games the past three seasons due to various injuries.

The Jaguars didn't get what they'd hoped out of Thomas when they signed him to a five-year contract worth $46 million with $24 million guaranteed in March 2015. He made little impact in 2016, and the Jaguars got as much out of second-year players Neal Sterling and Ben Koyack (29 catches for 271 yards combined), which made him and his $7 million salary expendable in 2017.

Thomas' struggles were partly due to injury but also because of erratic quarterback play by Blake Bortles. Thomas had 76 catches for 736 yards and nine touchdowns in two seasons, which is less than 10 yards per catch. He averaged 11.8 yards per catch and had 24 touchdown catches in his final two seasons in Denver.

Thomas missed a total of 11 games in two seasons with the Jaguars. He missed the first four games last season because of a fractured bone in his hand, and it took a while for him to get involved in the offense when he did return. He finished with 46 catches -- the second-highest total of his career -- but his yardage was way down (455 yards, the lowest of his career in which he played more than five games) and so were his touchdowns (five).

Thomas caught nine passes for 135 yards and a touchdown in the first two games of the 2016 season but caught more than three passes in a game just once after that and didn't have more than 28 yards receiving in any game. Thomas played in only nine games in 2016 and finished with 30 catches for 281 yards and four touchdowns. He missed Week 4 with an elbow injury and went on injured reserve after hurting his back against Detroit on Nov. 20.