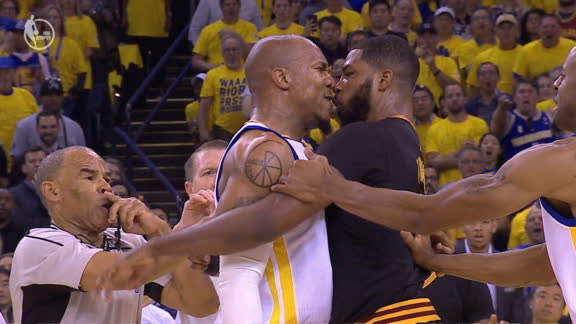 OAKLAND, Calif. -- Tempers flared with three minutes left in the second quarter of Game 5 of the NBA Finals as Golden State Warriors forward David West and Cleveland Cavaliers center Tristan Thompson had to be separated by teammates.

The incident occurred when West was fighting for a rebound with Kyrie Irving. As West gained control of the ball, he began swinging his elbows wildly in the direction of Irving.

That prompted Thompson to get in the face of West, and the Cavs' JR Smithcame from behind and shoved West before Draymond Green pulled him away.

The faces of West and Thompson were cheek-to-cheek during the heated altercation.

After officials reviewed the incident, West, Smith and Thompson were assessed technical fouls.

Stephen Curry shot the technical free throw, putting the Warriors up 61-45 and capping a 22-2 run.