Tensions rise as Cavaliers, Warriors involved in scuffle in Game 1 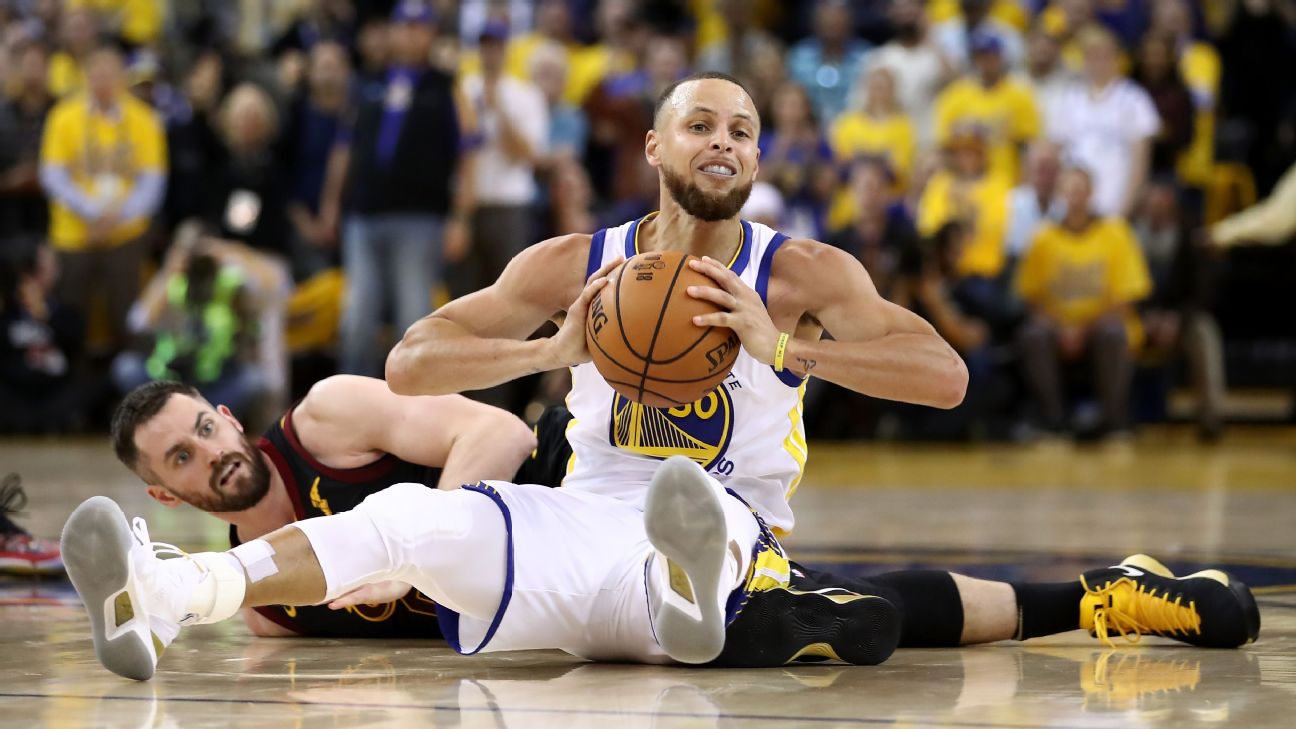 OAKLAND, Calif. -- The Cleveland Cavaliers could be without two of their starters for Game 2 of the NBA Finals on Sunday.

Tristan Thompson might face a suspension after shoving the ball in the face of Draymond Green in the closing seconds of Game 1 on Thursday night after Thompson was already ejected.

Kevin Love, who was not in the game at the time, could be hit with a one-game suspension for stepping onto the court while an altercation was ongoing.

The Golden State Warriors were up by eight points with five seconds remaining in the contest, but there was 2.5 seconds left on the shot clock. Warriors guard Shaun Livingston pulled up for a midrange jumper, and Thompson contested the shot, but his elbow appeared to connect with the right side of Livingston's chest, though replays called into question whether Thompson made contact.

"I contested a shot that shouldn't have been taken," Thompson said after the Warriors won 124-114 in overtime on Thursday. "I mean, it's like the unspoken rule in the NBA: If you're up 10 or 11 with about 20 seconds left, you don't take that shot. I make the contest, and next thing I know, I was being kicked out for a good contest that we learn in training camp. I don't know why I got thrown out."

Green began taunting Thompson by waving goodbye. When the two forwards approached each other, Thompson had some words before ramming the ball into Green's face.

"I didn't hear him," Thompson said, "but I heard him, and the rest is history."

Prior to Thompson exiting the court, Love was seen walking onto the court as Brothers went to the scorers table to relay his ruling. Love was quickly summoned off the court by an assistant coach. By rule, a player who is not in the game at the time of a skirmish is not permitted on the court. However, Love said he was not worried about receiving disciplinary action from the league for the sequence.

"No," Love told ESPN. "I was already on the court trying to get the refs' attention before the scuffle."

"I don't care about that incident," Green told ESPN. "It don't matter. Life goes on."

Warriors players say veteran big man Kendrick Perkins, who was inactive, was the most fired-up Cavalier. According to ESPN's Dave McMenamin, Green had been mimicking a cheerleader waving pompoms to mock Perkins, who was screaming toward the Warriors' side of the court.

Livingston defended his decision to shoot at that point in the game.

"I say that we don't take the turnover. I don't take the turnover," he told ESPN. "Kevin [Durant] threw me the ball, and he threw it to me like we were still playing. JR [Smith] was still guarding him, you know. No disrespect. We just play the game. So, that's what it was. ... It's the Finals. It's all love. ... It was like a YMCA pickup game in the last 30 seconds."

Green and Stephen Curry had Livingston's back.

"There was a differential from the shot clock and game clock," Green said to ESPN. "You're supposed to take a turnover? Some teams do. We're not those teams. The majority of that time we're in that situation, we shoot the ball. We're not trying to go dunk on them. We shot the ball. It's OK."

"If there's time on the clock and the shot-clock differential, whatever, just play it to the end," Curry said. "I don't think we would get on our feelings if somebody came down and finished out a possession and got a shot up. I mean, obviously, if they're doing some taunting or doing some crazy stuff, that's a little different. But if you're just playing the game of basketball and finishing out a possession instead of taking a turnover, I don't see any problem with that at all. Guys are out there to finish a game and play the right way. So, I think that's part of playing the right way."

That altercation wasn't the first one in the final minute of the game. LeBron James and Curry originally initiated the ruckus down the stretch. With 34 seconds left in overtime and the Warriors holding on to an 11-point lead, James blocked a Curry layup attempt.

The Cavaliers' forward began taunting Curry, who responded. They were separated by Klay Thompson, who then exchanged words with James.

"He looked back at me and started talking," Curry told ESPN.

"The game was over. That's what started it."

Game 2 might be absent a few faces, but that's something Green isn't too concerned about.

"We just want to play," Green said. "I'm not going to get into any of that [suspension] stuff. We're just going to play ball."