Picking college football's best players in August for ESPN's 2019 preseason All-America team is a dicey proposition. For instance, go back and see how many people had Kyler Murray as the best quarterback in the country -- let alone the Heisman Trophy winner -- at this time a year ago.

Keep in mind that this isn't necessarily a reflection of what players have done to this point. That's part of it, but an even bigger part is who we think will be the best players on the field this season, based on traveling the preseason camp circuit, talking to coaches and consulting with colleagues.

There were difficult decisions at just about every position. Case in point: How do you choose only two wide receivers with all of the great ones out there? Also, check out the talented (and productive) list of defenders who didn't make the cut.

This is what we came up with. It's always interesting to go back in December and see how we did. We're sure you will.

Lawrence is a bigger, stronger and faster version of the quarterback who dissected Alabama in the national championship game a year ago as a true freshman. He'll also be a more confident leader for the Tigers now that it's clearly his show on offense. Lawrence passed for 3,280 yards and 30 touchdowns last season and threw only four interceptions. If there were such a thing as a No. 1 overall pick in college football, Lawrence would be the overwhelming choice.

Imagine that: another all-world running back from Wisconsin. The 5-foot-11, 219-pound junior won the Doak Walker Award last season and was a finalist as a freshman. Of Taylor's 2,194 rushing yards last season, 1,309 came after contact, which leads all returning FBS running backs. And you want consistency? Taylor led the country with 61 runs of 10 yards or longer and had 10 runs of 30 yards or longer.

Lost in Lawrence's brilliance and all of the talent Clemson has at receiver is that the Tigers return one of the most complete running backs in college football. Not only did Etienne rush for 1,658 yards and score 26 touchdowns last season, but he also averaged 8.1 yards per carry and gained 884 yards after contact. The 5-foot-10, 215-pound junior has breakaway speed too. He had seven runs of 40 yards or longer last season.

Tua Tagovailoa will again have his pick of talented receivers to throw to this season, but the 6-foot-1, 192-pound Jeudy is in a different stratosphere than the rest. He's explosive, runs great routes and is always making big plays. Jeudy caught 68 passes last season, averaging 19.3 yards per catch, and hauled in 14 touchdowns. He had 14 catches that went for at least 30 yards on his way to capturing the 2018 Biletnikoff Award.

He doesn't have ideal size and sometimes gets overshadowed in what's an extremely deep receiver class in college football, but few players can go get the football the way the 6-foot, 185-pound Wallace can. The speedy junior burst onto the scene a year ago and led the nation with 63 receptions of 10 yards or longer. He finished with 86 catches, including 12 touchdowns, and his best three games came against top-10 opponents.

In every way, Pinkney looks like an NFL tight end ... and he plays like one too. His 774 receiving yards are the most by any returning tight end nationally. The 6-foot-4, 260-pound redshirt senior also has the size and power to help clear the way in the run game for explosive teammateKe'Shawn Vaughn. Pinkney caught seven touchdown passes last season and had a season-high 111 receiving yards against Notre Dame.

What is there not to like about the 6-foot-5, 320-pound Thomas, who started all 13 games in which he played last season at left tackle and all 15 games at right tackle in 2017 as a true freshman? Thomas is one of those rare tackles who's every bit as devastating as a run-blocker as he is skilled as a pass-blocker. He's also playing with great players around him in a Georgia offensive front laden with future pros.

Good luck penetrating the left side of Georgia's offensive line this season. Not only do the Bulldogs have Thomas at left tackle, but also right by his side at left guard is the 6-foot-4, 335-pound Kindley. A redshirt junior, Kindley is an absolute mauler in the run game, and he's athletic enough to protect the passer against the interior rush. The Dawgs should be a load up front offensively this season.

The name itself is catchy, but there's a lot more to Humphrey. A former standout wrestler in high school, Humphrey has incredible strength and equally good hands, and he will fight you on every play. Now a redshirt sophomore, the 6-foot-5, 315-pound Humphrey was college football's most dominant breakout player last season. He will be one of the sport's best players this season and gets our vote as the top center in a deep and talented class of centers.

One of the best interior offensive linemen in college football last season, Lemieux extended his streak to 38 consecutive starts at left guard for the Ducks. The 6-foot-4, 314-pound redshirt senior is a big reason why many around college football believe Oregon has one of the best offensive lines in the country. Lemieux is as smart as he is tough and as he is skilled. His experience makes him that much more effective.

Little became Stanford's first true freshman to start at left tackle since 2000 and has just gotten better and more dominant since. The Cardinal and accomplished offensive linemen seem to go hand-in-hand, and the 6-foot-7, 313-pound Little is the next great one. He also played basketball and ran track in high school, and that athleticism is obvious in the way he protectsK.J. Costello's blind side.

Moore became a household name in college football last season as a freshman after he carved apart the Ohio State defense. He was fourth nationally with 2,215 all-purpose yards, including an average of 12.3 yards per play, and won the Paul Hornung Award as the nation's most versatile player. When he touches the ball, that's when the fun starts -- for everybody but the opposing defense.

After leading the Buckeyes in sacks (10) and tackles for loss (15.5) a year ago as a true sophomore, Young is poised to be even more dominant in 2019. The 6-foot-5, 265-pound Young certainly didn't look out of place as a true freshman on an Ohio State defensive line that produced four NFL draft picks the past two years. He has the burst, explosiveness and length to absolutely wreak havoc this season for the Buckeyes.

Rarely do defensive tackles as big, talented and accomplished as Brown return for their senior seasons, but Brown is back on the Plains and anchors an Auburn defensive line that should again be outstanding. The 6-foot-5, 318-pound Brown has one of those wingspans that opposing offensive linemen hate. His power, strength and explosiveness are equally menacing. There isn't a better defensive lineman in the college game.

An absolute mountain of a man, the 6-foot-5, 335-pound Fotu might as well be a mountain for the Utes in the middle of their defensive line. Good luck budging Fotu, even when you double-team him. And as dominant as Fotu has been up front, his best football is ahead of him, and there's a reason Utah coach Kyle Whittingham doesn't shy away from mentioning Fotu and former Utah great Luther Ellis in the same sentence.

Clemson's defensive line pipeline the past few years has been staggering, and Thomas has everything it takes to be next in line. The 6-foot-2, 260-pound sophomore wasn't a starter as a freshman, but he recorded 10.5 tackles for loss and only scratched the surface of how good he can be. The Tigers lost a ton of talent up front from their national championship team, but Thomas is the kind of game-changer who helps fill that void.

The fact that Chaisson will wear the coveted No. 18 this season tells you what those in the LSU program think of him. He blew out his knee in the season opener a year ago after wowing in the preseason. The 6-foot-4, 250-pound sophomore is a blur rushing the passer from his outside linebacker position, and if he can stay healthy, he will be as disruptive as anyone in the college game this season.

He's part-safety, part-linebacker and all-playmaker. The 6-foot-4, 225-pound junior actually transitioned from safety last season and led the Tigers with 97 total tackles, including 9.5 for loss, and he returned his only interception for a touchdown. Simmons played some of his best football in the biggest games last season. Defensive coordinator Brent Venables is already devising new ways to turn Simmons loose on opposing offenses this season.

The Crimson Tide are thinner than they would like to be at linebacker, but they have a real thumper (as Nick Saban likes to call them) in Moses, a 6-foot-3, 235-pound junior who's capable of playing both inside and outside in the Tide's scheme. A finalist for the Butkus Award last season, Moses recorded a team-high 86 tackles, including 10 for loss.

LSU has had its share of great safeties over the years, but Delpit has a chance to be right up there with any of them and will be a main cog in Dave Aranda's defense. The 6-foot-3, 203-pound junior is relentless and flies all over the field. He had five sacks and five interceptions last season, and that was just a glimpse of how disruptive he's poised to be in 2019.

As a freshman, McKinney made a name for himself on special teams, and last season he showcased his coverage skills, big-play ability and versatility as he blossomed into one of the most complete safeties in college football. The Crimson Tide will use McKinney in a variety of ways in 2019, and what Nick Saban likes most about the 6-foot-1, 200-pound junior is that he's always in attack mode.

If you're looking for a defender who is always around the ball, Hall is your guy. The 6-foot-1, 200-pound senior led the country a year ago with 22 pass breakups and tied for the lead with 24 passes defended. Hall has been a starter since his true freshman season and has excellent ball skills. Don't be surprised if he adds to last season's total of two interceptions.

Like most great defensive backs, Henderson dares opposing quarterbacks to come after him, and most choose not to. The 6-foot-1, 202-pound junior has the size, speed and instincts everyone's looking for in a cornerback. The ultra-competitive Henderson will wear No. 1 for the Gators this season, which is appropriate. That's where he ranks among cornerbacks in college football.

As a redshirt freshman last season, Szmyt came out of nowhere to win the Syracuse place-kicking duties, and by the time he was finished, he had put together one of the great seasons by a kicker and won the Lou Groza Award. He's consistent and has great range, as evidenced by his NCAA-leading 30-for-34 clip on field goal attempts and 3-for-3 mark on field goals of 50 yards or longer.

Mann will attempt to build on a sensational junior season that saw him win the Ray Guy Award and SEC Special Teams Player of the Year Award. Not only did Mann average 51 yards per punt, but he also had 19 punts downed inside the 20-yard line. Just for good measure, he also had four tackles on special teams and forced a fumble. 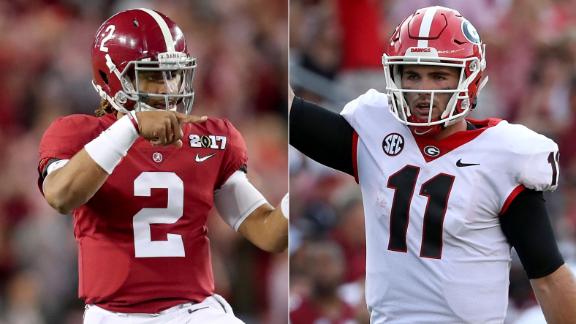