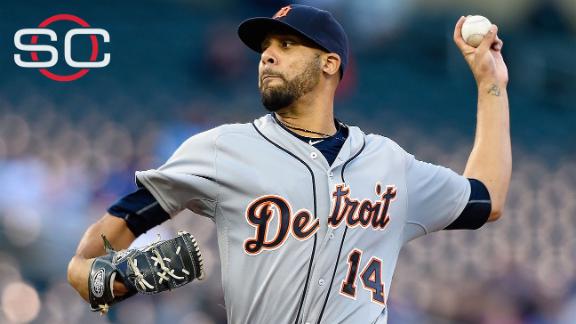 "These types of players, the great superstar players, rarely become available," Toronto general manager Alex Anthopoulos said. "We think we're a good team, and adding a guy like Price we think makes us that much stronger and will give us a chance to win. It's as simple as that."

It is the second big deal this week for the Blue Jays, who also acquired shortstopTroy Tulowitzkifrom theColorado Rockiesas they make a push in the AL East. The Blue Jays -- six games back of the first-placeNew York Yankeesafter Thursday's games -- have not made the postseason since 1993.

"By adding these two," Toronto manager John Gibbons said, "it gives me a shot in the arm. I know that."

Jays third baseman Josh Donaldson said: "You look around the clubhouse, you're going to see a lot of All-Stars. It feels like you're almost playing fantasy baseball."

Price is 7-0 with a 3.86 ERA in his career at Rogers Centre,his most wins without a loss at any stadium in the league.The Westgate SuperBook moved the Blue Jays' odds to win the World Series from 25-1 to 16-1 with the acquisition of Price. TheKansas City Royalsremain the favorites at 7-2.

Speaking in the Detroit clubhouse before the Tigers' 9-8 victory over the Orioles on Thursday in Baltimore, Price was excited about joining a contender -- even if he did refer to the Blue Jays as "they" instead of "we."

"They've got a good thing going on right now in Toronto," he said. "They've kind of been in this situation before and didn't make these type of moves. It definitely shows you that they want to win right now. You have to respect that. You have to like it and that's what you want to be a part of."

The Tigers acquired Price before the trade deadline in a three-team blockbuster last July -- one of several bold moves the Tigers have made over the last few seasons while winning four straight AL Central titles.

Dombrowski labeled the decision a "rebooting," saying the Tigers have a solid foundation going forward.

"We're only going to make a trade if we think it makes sense for us," he said, according to MLB.com. "But we think it gives us a chance to restock our club."

Price, the 2012 AL Cy Young Award winner, will anchor a Toronto rotation that includes Mark Buehrle and 2012 NL Cy Young winner R.A. Dickey. The Blue Jays might not need stellar pitching down the stretch with a lineup that includes Tulowitzki, Jose Bautista, Josh Donaldson and Edwin Encarnacion, but Price gives them a true ace -- which could come in handy if Toronto does end up in the one-game, wild-card playoff.

"I'm going to be a Blue Jay now. That's just part of the business," Price said. "I'll go there and be ready to pitch every five days and be a good teammate during the days in between."

Norris, 22, was Toronto's No. 2 pick in 2011 and made his major league debut last season. He recorded his first career win April 9 against the Yankees.

Information from ESPN's Jim Bowden, Jayson Stark, Jerry Crasnick, David Purdum and The Associated Press was used in this report.