Tom Coughlin mum on future with Giants after loss to Eagles 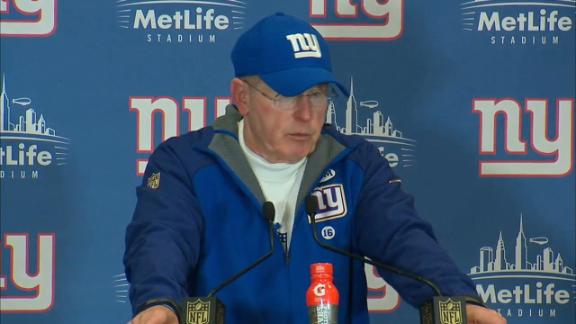 Tom Coughlin did not answer questions about his future as the New York Giants' coach on Sunday, saying "there will be a time for that."

Coughlin addressed the media after Sunday's 35-30 loss to the Philadelphia Eagles, a loss that punctuated his third consecutive losing season in New York.

"You've got your questions prepared for what direction I'm going to go," said Coughlin, who finished his 12th season as the Giants' coach. "I'm not going to answer anything about that. The season just ended. There'll be time for that. We will get into that discussion."

The Giants went 6-10 this season and have not made the playoffs since 2011, when they completed an improbable postseason run with their second Super Bowl championship under Coughlin.

Giants ownership is scheduled to meet Monday morning to discuss Coughlin's future and other matters relevant to the team's future.

"I'm going to give myself a little bit of time," he said. "I'm sure we'll talk with ownership and then we'll go from there."

Coughlin's job status has been the subject of widespread speculation in recent weeks, and the 69-year-old invited his extended family to attend Sunday's season finale at MetLife Stadium. All 11 of Coughlin's grandchildren were on the field before the game in sweatshirts that read "Coughlin Crew."

Coughlin explained why his family attended the game, saying that it had nothing to do with his future.

"What happens is fortunately we play at home, and the family gets together not on Christmas because people have to visit relatives and in-laws and things like that," he said. "So this is the weekend that our group collects. But it was really neat to see it. The kids were all dressed up in a sweatshirt with their name on the back, and I don't know, it was neat."

Coughlin: 'Finishing has been very difficult for this team'
Giants coach Tom Coughlin talks about New York's effort level and his future with the team.

What is next for Coughlin, Giants?
ESPN's Dan Graziano discusses the future for Tom Coughlin after the Giants finish the season 6-10.